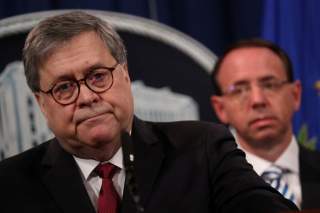 A day nearly three years in the making, when the FBI first began whispering of Russian connections to the Donald Trump presidential campaign in the summer of 2016, has finally arrived. This morning Attorney General William Barr hosted a press conference, joined by Deputy Attorney General Rod Rosenstein, where he explained the process of the releasing the report by Special Counsel Robert Mueller.

“I’m committed to ensuring the greatest degree possible of transparency concerning the special counsel’s investigation, consistent with the law,” said Barr. The attorney general gave high praise for his deputy, who had helped oversee the investigation since the beginning in May 2017. Barr thanked Rosenstein, who was often on the receiving end of the president’s public criticism, for his help and service. Barr also praised Mueller for his further uncovering of Russian interference in the presidential election.

“Thanks to the special counsel’s thorough investigation, we now know that the Russian operatives who perpetrated these schemes did not have the cooperation of President Trump or the Trump campaign. Or the knowing assistance of any other American, for that matter,” explained Barr. He further acknowledged that no American was involved in the online disinformation campaign conducted by the Internet Research Agency, a Russian influence company associated with the government. “The investigation did not identity evidence that any U.S. person knowingly or intentionally coordinated with the IRA’s interference operation.”

Barr went on to discuss the leak of the Democratic National Committee’s emails during the campaign, an action for which the Mueller investigation indicted multiple agents of the Russian intelligence service. Interestingly, Barr made the important distinction between the hacking of the documents, which is illegal, and the publication of the documents, which is not. He identified some of the original publishers, such as Guccifer 2.0 as Russian cutouts, but did not give the same association to Wikileaks. This is important in the context of Wikileaks founder Julian Assange’s arrest last week.

Both Barr and Rosenstein concluded that there was no sufficient evidence to charge the president with obstruction of justice. Barr further said that while he and his deputy did not agree with some of the special counsel’s legal theories as to what qualifies as obstruction of justice, they did conform to the legal framework presented by the counsel. There was no corrupted attempt to interfere with the investigation.

Expanding on this, Barr explained that President Trump was in an “unprecedented situation,” having entered office under a cloud of suspicion. Despite having accusations limit his political ability to act, “As he said from the beginning, there was in fact no collusion.” Barr made clear that it was not his discretion alone to make the president’s reaction and difficult state a point of contention, but that it was an issue raised in the report itself. “As the special counsel’s report acknowledges, there is substantial evidence to show that the President was frustrated and angered by his sincere belief that the investigation was undermining his presidency, propelled by his political proponents, and fueled by illegal leaks.”

As Barr has explained previously, redactions to the report were related to four categories; grand jury information, information that the intelligence community believes would disclose sources and methods, information that would interfere with current investigations or prosecutions, and redactions made to protect the privacy and interest of peripheral third parties. All redactions in the report have been “clearly labeled” so readers will know exactly which category they fall under. The redactions were performed by attorneys with the Justice Department working in concert with attorneys from the Special Counsel’s office. No one outside this group enacted or proposed redactions to the report. No one outside this group, excluding pertinent sections seen by the intelligence community, has seen the unredacted report.

The report was sent by the Justice Department to Congress following the press conference. Certain congressional committees will be able to see the unredacted report with the exception of grand jury information. This exclusion is likely to be challenged in court by congressional Democrats. The redacted report was reviewed by the White House Office of Legal Counsel prior to the press conference. The White House did not invoke any instances of executive privilege.

Democratic reactions to the press conference have been negative, with many claiming that the attorney general went out of his way to excuse or protect the president. Many members are unhappy that White House attorneys were able to read a version of the report before them. Not ten minutes after the end of the press conference, House Judiciary Chair Jerrold Nadler (D-NY) officially sent a request for Robert Mueller to testify before Congress.

When asked by a reporter why Mueller wasn’t present at the press conference alongside him, Barr said it wasn’t his report to present. “It’s a report he did for me, the attorney general,” he claimed. The public version of the Mueller report is now available online.