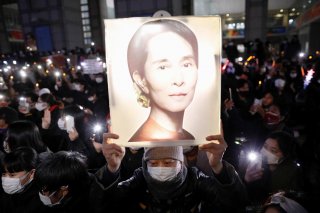 The recent coup d’état in Myanmar is more evidence that democracy is indeed fragile. Myanmar is by no means what anyone would call a functioning democracy. But after several decades of military rule, there was a burgeoning hope that Myanmar was at least on the path towards increased political representation for its multiethnic population.

Just last November, the country held only its second truly contested election in decades—the result of which secured another win for the National League for Democracy (NLD). The NLD is led by Aung San Suu Kyi, the 1991 Nobel Peace Prize laureate who spent fifteen years under house arrest before emerging as Myanmar’s de facto civilian leader five years ago.

While the 2020 election was hailed as a landslide, the latest coup in Myanmar—the most recent in a long history of military rule—is in many ways no surprise. The academic literature on coups and elections indicates as much. Several points merit mentioning.

Second, military leaders are generally reluctant to remove leaders and governments commanding high levels of popular support. Failed coup attempts can be costly and even have provoked civil wars. The most famous instantiation of which may be the Spanish Civil War, which began after General Francisco Franco’s failed coup attempt in 1936.

This point highlights another important finding. Elections reveal information to would-be coup plotters about the strength of the governments they may wish to depose. One study found that when an incumbent’s margin of victory shrinks relative to the opposition’s, coups are more likely. Elections, even those featuring manipulation and fraud, offer signals to the military about the ease with which a government might be removed.

Finally, electoral institutions matter as well. That is, the manner in which votes are translated into political outcomes has bearing on coup propensity in the aftermath of elections. While there are many voting or electoral systems, two of the most common are plurality systems and majoritarian systems. The former (first-past-the-post) awards the contest to the party or leader receiving the most votes. By contrast, in majoritarian systems, winners are required to earn a ‘majority’ of the votes, often incorporating rounds of votes to eliminate less popular candidates.

A key difference between these two systems is that plurality systems can bring to power parties or individuals that are more unpopular than they are popular: if they ran separately against every other candidate in the contest, they would lose each time. The technical term for this is a Condorcet Loser. The upshot of this is that even winners with high vote shares in plurality systems may not have a strong popular mandate to rule. Scholarship suggests that incumbents winning high vote shares in majoritarian electoral contests are less likely to face coups; however, winning—even by large margins—in plurality systems produces no such benefit.

This brings us back to the coup in Myanmar. The recent general elections bringing the NLD to power were contested under a first-past-the-post rule. More than 6,900 candidates from 92 political parties stood for election in 1,171 seats. While the results indicated the party captured enough seats to form the government, all offices up for grabs required only a plurality to prevail.

Why did the military decide to act now? The timing of the coup makes obvious that it acted to prevent the first session of parliament from taking place this week, during which the electoral results would have been endorsed and the next government selected.

While this is a short-term precaution, the military’s longer-term calculus is more difficult to discern. There certainly will be immediate displays of public anger. The question is if such sentiment will translate into a more protracted and costly backlash. This is the question the military very likely weighed before it decided to act.

While the behavior of Myanmar’s military looks reckless and defiant to many, it does display an ironic logic. Yes, the NLD won 83 percent of the parliament’s available seats in last November’s elections. And, yes, Suu Kyi looks to have procured more backing in 2020 than she did in 2015, the last time elections were held. Moreover, it looks as if the military in Myanmar staged its coup because the election results indicated support for Suu Kyi and the NLD were too strong. However, the military’s wager may have been precisely the opposite: that although the elections showed that Suu Kyi and the NLD won enough votes to win the election, at the same time they didn’t win enough votes to offset the consequences of a putsch.

Time will tell. Unfortunately, the electoral system in Myanmar suggests the generals’ calculation may be right.

Sean Zeigler is a senior political scientist at the nonprofit, nonpartisan RAND Corporation.