Naval Gazing as the World Economy Goes Up in Flames 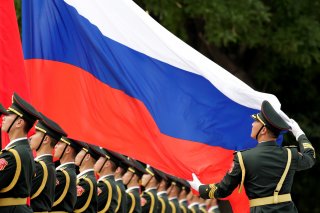 As the global economy continues to evolve in the direction of a slowly unfolding belly-flop “with Chinese characteristics,” we national security analysts should be kind enough to leave economic prognostications to actual economists. Fair enough. Still, it’s worth pausing briefly to consider whether all the hub-bub about “great power competition” (GPC) has significantly weakened the global economic system over the last several years.

Has “decoupling” and tariff mania with China caused businessmen to be confident and move aggressively to invest in new plant and product lines? How about the farmers toiling the soil? If America is constantly labeling China as an “adversary,” then is anyone shocked that the Chinese people are not necessarily highly amenable to shipping emergency medical supplies needed to combat the coronavirus?

One is also prompted to wonder about the larger economic impact of the whole raft of sanctions against Russia, which is just one of the many countries that are often in the sanctions crosshairs of the U.S. Congress. Did anyone think that attempting to cleave the world’s sixth-largest economy in Russia apart from the neighboring fifth, Germany, (using CIA estimates on GDP) would be pain-free? Adam Smith would scoff indignantly at the “fruits” of great-power competition, including both crude and clumsy attempts to “decouple” from China and concurrently damaging efforts to isolate Russia from Europe. So should we. Perhaps one way out of the economic tailspin we increasingly find ourselves in is to learn to love trade and globalization again? And yes, that affection should include both Russia and also China—huge and critical nodal markets for all of Eurasia, to state the obvious. But enough about the “dismal science” of economics. Let us return to our “wheel-house” and the graver matters of defense and national security.

The Russian navy-focused website, Flot.com, has published its “annual naval estimate of combat capability [ежегодный рейтинг боевых возможностей ВМФ]” back in mid-February and the results are a bit shocking. American strategists should pay attention to such estimates, not least if they consider the Kremlin as a major potential adversary, but also because these estimates appear to be based on a reasonably sound, scientific methodology. The findings of this team of Russian naval analysts are interesting for three reasons: for what they say about the future of Russian naval power, their assessment of the current U.S. Navy, but also for their evaluation with respect to the rise of China’s naval power. Let’s take these issues in turn, beginning with the plainly troubled Russian Navy—still reeling from its last major fatal accident aboard the special mission nuclear submarine Losharik back in July 2019.

The Russian appraisal valiantly attempts to put a positive “spin” on the estimates. In the title, it is said that, in terms of the aggregate number of ships, that the Russian fleet is “almost equivalent to the American Navy.” Moreover, its combat rating versus the U.S. Navy is said to be improved over 2018, but there is no hiding the rather disquieting numbers for Kremlin strategists. The Russian Navy is revealed to have less than half (49 percent) of the combat power of the U.S. Navy for 2019.

The authors lament that “the year did not achieve a breakthrough for the Russian Navy [год не стал для российского ВМФ прорывным].” Frigates, corvettes, and amphibious ships were all delayed, as were improved versions of the Yasen-class nuclear attack submarine (SSN) and the Borey-class strategic nuclear submarine (SSBN). Russian shipyards could only manage to hand over a diesel submarine, a trawler, and a handful of corvettes and missile boats, according to this report. It may be useful to consider the combat capability number of 49 percent from a historical perspective. According to this yearly rating, that number reached a nadir in 2012 of 42 percent, likely due in large part to block-obsolescence of Soviet-era warships, to state the obvious. Indeed, that figure could be contrasted to the highest number available—65 percent back in 2007. A string of mishaps, including a significant fire aboard the Russian Navy’s only aircraft carrier, imply that the force is struggling to match the national leadership’s ambitious goals for the fleet. Despite these obvious problems, it still must be said that this challenged force nonetheless packs a solid punch and is now testing the world’s most capable anti-ship cruise missile, Zircon.

And how do Russian naval analysts appraise the current circumstances of the U.S. Navy? Perhaps reflecting the gloomy mood of Russia-U.S. relations, they are not too kind. While admitting that the numbers show that Washington retains roughly double the naval combat capability of Moscow at present, they observe that U.S. shipbuilders have “lost the previously rapid pace [потеряла прежний резвый темп].” They record delivery of a single Burke-class destroyer and Virginia-class submarine in 2019, versus the planned program of two each. It is duly noted that the U.S. Navy did receive six Littoral Combat Ships into its ranks but here the tone is dismissive: “for the rating results, they don’t have much meaning, because their coefficient weight [но для результатов рейтинга они не имеют такого значение, поскольку их весовой коэффициент]” for combat capability is rated as minimal. Finally, the Russian analysts point out problems in the U.S. ship repair system, highlighting that three American aircraft carriers are in the yard for extended periods with little expectation that these issues will be sorted out in the near term.

A certain conclusion buried near the end of the assessment, however, is quite astounding. The Russian authors state: “if you look at the Chinese indicators, the achievements of the domestic Navy will seem rather modest. [если взглянуть на китайские показатели, достижения отечественного ВМФ покажутся довольно скромными].” Then, they observe that the Chinese fleet already exceeds both the Russian, as well as the American fleet in total numbers of warships. Somewhat shockingly, they then conclude: “In terms of the level of combat power, the PRC fleet is almost equal to the U.S. Navy.” No further explanation is given in the article, but numerical tables reveal that Chinese naval combat capability is assessed to be now 93 percent of that of the U.S. Navy. The fact that the Russian analysts neither gloat, nor denigrate this numerical result, but rather state it matter-of-factly, implies it could be an important conclusion. Indeed, one may suspect that Russian military analysts could be inclined to overstate their own country’s military strength, but that seems not to be the case here either.

Even as the big news in this article concerns the evolving U.S.-China naval balance, hope springs eternal for Russian naval strategists. Keels are to be laid in 2020 apparently for two large amphibious ships that the Kremlin has long wished for. Yet, this hardly heralds a grave new threat for NATO neighbors. Don’t forget that the vaunted Western Alliance boasts a defense budget that is about twenty times as large as Russia’s. And that was before the recent collapse of the oil price.

As a Biden presidency becomes ever more likely, the world can perhaps expect the continuation and even acceleration of the “New Cold War” into the extended future. The announcement that Vladimir Putin could govern Russia through 2030 and beyond will only add fuel to that blaze. But should it? Does the world’s future need to turn on the fate of Donbass and Idlib? Do American foreign policy interests really hinge on new leadership in the Kremlin? If Russians are feeling insecure and want to retain their current leadership in the name of stability, then does that need negatively impact U.S. interests?

No, the next U.S. president should instead come to the objective appraisal that Russia has far too many internal problems to make any real trouble. In fact, the greatest threat Russia may present to U.S. interests could well be the prospect for serious tumult within Russia and consequent reverberations, whether in the form of “loose nukes,” Russian nationalism on steroids, or total economic meltdown. The focus of the next U.S. leader should therefore not be on backing an angry bear further into a corner, but rather prudently on arms control, crisis management, as well as resuscitating the global economy by invigorating new and dynamic trade linkages.

To rediscover the charms of globalization, this timely return to commerce should include extending new connections to countries long considered adversaries, thus realizing vast new market potential, including especially with Russia. Such moves will not only buoy America’s understandably anxious but potent entrepreneurs. They would simultaneously present a subtle, cost-effective and thus viable path to partially balance China’s starkly apparent new power.

Lyle J. Goldstein is Research Professor at the China Maritime Studies Institute (CMSI) at the United States Naval War College in Newport, RI. In addition to Chinese, he also speaks Russian and he is also an affiliate of the new Russia Maritime Studies Institute (RMSI) at Naval War College. You can reach him at [email protected]. The opinions in his columns are entirely his own and do not reflect the official assessments of the U.S. Navy or any other agency of the U.S. government.