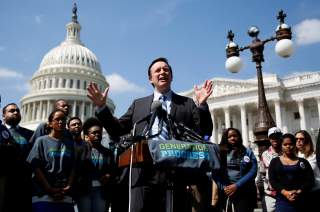 Sen. Chris Murphy (D-CT) has been one of the leading foreign-policy-focused politicians in the Democratic Party for several years. He believes that Democrats need to go on the “offensive” on national-security issues in the 2020 election, making it a keystone of any campaign. He’s also been the primary steward of senate legislation trying to extricate the United States from the Saudi war on Yemen. This morning Murphy spoke at the Council on Foreign Relations laying out what he views as the progressive foreign policy his party should adopt.

“The lack of creativity in American foreign policy today is maddening to me . . . so is the lack of attention to serious national-security thinking amongst leading Democrats,” Murphy said. He believes that foreign policy should be an extension of the policies that the Democratic Party supports domestically.

“I think we should connect our domestic progressive priorities to the fights that we have abroad. We need to understand that if you’re fighting with democracy here, if you’re fighting for human rights here, you have to be engaged globally on these issues.”

While realists believe in the necessity of putting the national interest above preferred social values, Murphy is more of a constructivist who believes the primary interest of the United States is promoting its values. “Promoting democracy abroad is an interest. It’s not just a fuzzy value that Americans have, it’s an interest. We believe that the more people that have access to democracy the more safe the world is, the less threats that we face, and ultimately the more stable our own democracy is,” he said.

“I do think that what does unite progressives is the idea that we should learn from our mistakes in Iraq and Afghanistan while not withdrawing from the world,” Murphy continued, clarifying that he fully opposes massive, overt military interventions overseas. In fact, he’d rather see that funding go to other spots. “I’m not arguing for a massive downsizing of our military. But there is such a thing as too much of a good thing. Especially when military spending comes at the expense of creating capabilities that actually meet the threats that we face.”

“It’s not an antiwar platform in the sense that we always reserve the right to use military force to protect our interests abroad,” he added, which will be disheartening to anti-imperialists on the left.

For example, Murphy identities gun control, one of his pet projects, as an important component of American foreign relations. “Our inability to deal with this issue [gun violence] is one of the things that pushes us away from our allies. And from the very start, our foreign policy has been predicated a creating a model, an economic and governance model here in the United States that’s so attractive to the rest of the world that they want to sign up with us.”

Furthermore, Murphy believes in taking the initiatives of the Green New Deal and making them global. “My view is that we should use the largesse of American government and our finance institutions to actually help finance some of these wind projects, these solar projects, these geothermal projects in and around Europe.”

“Let’s create a new category of foreign service officers dedicated to fighting corruption abroad, so that every single embassy in the world has one or more dedicated American staffers that are working to put the rule of law first,” he proposed as an alternative to Pentagon funding.

When it comes to competing with other global powers such as Russia and China, Murphy believes in fighting fire with fire.

According to Murphy, a progressive foreign policy would see a dramatic ramp up in overseas propaganda efforts. “It would be more effective to empower voices in countries on the front lines of Russia and China’s information wars rather than American military bureaucrats. With small budgets you can only afford to entertain small ideas, so we’re not thinking about funding high-quality content to help independent media outlets for funding a Russian-language version of Al Jazeera that could be a real alternative to Russian satellite channels.”

“We need to be funding counter-narratives,” the senator said.

Chinese economic expansion needs to be met, not with a military build-up, but with our own economic expansion. “We desperately need more economic leverage around the world,” Murphy emphasized. “We need to have an answer to what China has done with 5G, and what they’re going to do with advanced batteries and [artificial intelligence] in the next decade.”

A part of this economic growth includes returning to international trade agreements. “Free trade can be a progressive idea,” Murphy said, hoping to return to a time before the Trump administration turned the trade debate on its head. “We have become, generally, over reliant on using tariffs and sanctions as a way to bully countries into working with us on a host of issues.”

Special ire was reserved for the U.S. relationship with Saudi Arabia, which Murphy has been a longtime critic of. “The Saudis are not being held accountable. Muhammad bin Salman got away with murder,” he said, referring to the assassination of Washington Post contributor Jamal Khashoggi. The senator said he was working with colleagues to find new ways to end arms sales to the monarchy but wasn’t confident in long-term success. “The president has made it pretty clear by now that he’s going to veto anything we do to change our relationship with Saudi Arabia, as he did with our resolutions to pull United States troops out of the military coalition vis-à-vis Yemen.”

When asked about tonight’s Democratic debate, Murphy reiterated that no candidate has laid out a comprehensive foreign-policy vision to his satisfaction. “Bernie [Sanders] and Elizabeth [Warren] have been given speeches or written pieces outlining some of their basic priorities. Pete Buttigieg has given some interviews on this topic. Obviously, those who come from the senate have a built-in set of experiences and expertise. Cory [Booker] is on the Foreign Relations Committee,” he allowed.

Congresswoman Tulsi Gabbard (D-HI) is the only presidential candidate to make foreign policy the heart of her platform. She will not be included in tonight’s debate.