No, America Doesn't Need to Bring Back the Draft 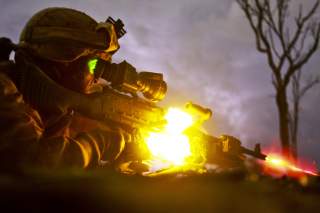 Georgetown University graduate student and Marine officer Nick De Gregorio recently declared in the National Interest that “Defense of America and its ideals must be made collective again.” De Gregorio cites the “cultural costs” of the All-Volunteer Force (AVF), the civil-military divide, and fostering national unity as reasons for arguing in favor of a draft.

Such arguments are hardly novel. Not long after the end of the Vietnam War, along with the end of the draft and the implementation of the AVF in 1973, some Americans were already calling for a return to conscription. But, like most arguments in favor of the draft, De Gregorio’s case is undermined by several erroneous assumptions.

To understand these errors, two facts must first be brought to bear.

First, draft proponents stand virtually alone. Poll after poll reveals remarkable consistency regarding the draft’s unpopularity among the American public and even military veterans and their families. This is crucial, as it implies any attempt to re-institute conscription will run into significant push-back, making such a policy highly unlikely to be implemented. How one plans on defying the will of the American people is something rarely addressed by draft-supporters.

Second, conscription has been the exception, not the norm, in American history. Up until the end of World War II and the beginning of the Cold War, the United States has relied on a relatively small, professional military augmented via conscription to meet the needs of a particular conflict. Since the end of World War II, America has relied on a large standing military that, even with the draft still in practice, had volunteers and professional soldiers forming its backbone. Unless the United States wants to revert to the days of a smaller standing force that expands with conscripts in the event of war, there is no draft to “return” to. Viewed historically, the transition to the AVF is merely a step in the evolution of warfare. The advent of nuclear weapons, for example, played a major role in nullifying the concept of mass mobilization, as General Rupert Smith observed—size matters little if your big armies can be vaporized in a flash. Hence, the latter half of the twentieth century saw greater emphasis placed on professionalism and specialization in the armed forces.

Acknowledging conscription’s unpopularity—and how and why the AVF came to be—is critical to understanding why a draft amounts to cutting off one’s nose to spite the face. A draft is a manpower policy, nothing more, nothing less. Utilizing conscription to unify the nation and avoid the fracturing of society is a perversion of that policy. Drafts took place in the past out of sheer military necessity and, even then, there has been consistent opposition to the policy, including as long ago as the Civil War. Should a draft ever be seriously considered in the future, there needs to be both public and political agreement on the matter, along with a clear and obvious need for it, otherwise, it will only contribute to society’s ills.

De Gregorio, like most draft-advocates, wrongly attributes the cause to the AVF. The AVF has become a punching bag, blamed for all sorts of problems that afflict the country today. But as University of Minnesota Professor Ronald Krebs reveals, the AVF was the product, not the cause, of broader socio-political trends underway long before the draft ended. During the first half of the twentieth century, America underwent a transition from a more civic duty-minded “republican” form of citizenry to the more “liberal,” individual liberty-minded form of citizenry that dominates today. In fact, shortly after the end of World War II, the draft was already becoming less popular and, by the early-1960s, both the Johnson administration and their 1964 election opponent in Barry Goldwater were seriously discussing ending the policy. Bear in mind this took place before the U.S. escalation in Vietnam and the protests that came to define a decade.

For better or for worse, the nature of citizenship today remains the liberal variant, in which Americans treasure their individual rights, while largely resisting the notion of additional responsibilities beyond paying taxes and obeying the law. Draft proponents do make a salient point that this emphasis on rights has created a “one-way street” where the public fails to appreciate the costs of preserving and defending the republic and may not be prepared to make necessary sacrifices when the time arises.

When arguing in favor of conscription, its advocates must remember that not only is a draft an un-democratic policy (especially if imposed without popular consensus), but the military itself is an undemocratic, authoritarian institution. A nation that was founded on the notion of guaranteed individual liberty would risk losing hard-fought gains if it decided to pursue a policy of militarization to “save Americans from themselves,” as De Gregorio put it. In a tragically ironic sense, a draft would address the civil-military disconnect by making the military the preeminent institution in American society, effectively a modern-day Sparta. The possibility of such an outcome makes the idolatry the military currently enjoys particularly disturbing. Given growing concerns about the creeping militarization of the country, conscription seems like a bizarre and self-destructive means of preserving and defending the republic. It becomes even more bizarre when confronting the fact there is little to no evidence greater societal participation in the military translates to more responsible decision-making with regards to war.

Central to draft-supporters' arguments is the notion that public policies create the ideal cultures and societies. In De Gregorio's argument, a draft will "foster a culture of universal contribution" and render America better-able to defend itself. He then evokes the Roman tradition by ending his piece with the old proverb "Si vis pacem, para bellum." Once more, the draft-advocates have it in reverse. As stated above, a draft can only be implemented if society and state agree on its necessity and if the public is willing to make the adjustments necessary to make it successful. By the time military service had become compulsory in Ancient Rome, a tradition of service and sacrifice had long since been established through sheer necessity wrought by centuries of armed conflict and the preeminence of the military in politics and society. In addition to embracing martial values, Roman society was built and mobilized for warfighting. Notwithstanding the fact Rome eventually adopted a professional force of volunteers and ran into serious problems when it tried re-instituting conscription during its decline, the draft worked when it did because serving was a part of the societal fabric of Rome.

America, on the other hand, has never embraced this sort of militarism, nor has service formed a key component of the nation’s social fabric, then or now. As Mark Perry points out, the military is having a tough time meeting its recruiting goals due to the sheer number of Americans in the eighteen- to twenty-four-year-old demographic failing to meet the services' educational, legal, or medical standards. While remedies exist, lowering standards is not one of them. As a society, the United States is not prepared to be mobilized in any fashion for war. This is a problem that needs to be addressed before entertaining any serious conversation governing the institution of a draft.

Even among those who end up serving, not all are cut out for military life or public service, for that matter. In the Army alone, 40 percent of recruits do not make it through their enlistment contract, a proportion made even more staggering when considering the amount of capital expended in the process of acquiring enlistees. As a Marine officer, De Gregorio must have borne witness to those better off not wearing a uniform, bearing arms, or swearing an oath. Why amplify the problem by compelling millions more to serve? Technicalities of a national service program notwithstanding, the state would end up spending more taxpayer dollars on countless citizens who are unable or unwilling to deliver a return on investment.

Furthermore, despite public support for compulsory military service as part of a broader “national service” program is no panacea, either. “De Gregorio cites military writer Thomas Ricks’ 2012 plan as “good place to start” when re-instituting conscription. Nothing could be further from the truth. In fact, if De Gregorio believes “common bonds” and “burden-sharing” to be benefits of conscription, then Ricks’ plan is a recipe for disaster. The 2012 proposal offers two options for national service—military or non-military—and a choice to opt-out at the cost of ceding entitlement benefits.

We see already the proposal will create additional fault-lines in an already fractured-society. Such a plan would first create two militaries—the professional force versus the “non-deployable” (as Ricks put it) conscripts. Then there would exist a divide between those who serve in uniform and those who taught in schools and helped the elderly. Finally, there would be a fault-line between those that chose to serve in some capacity versus those who did not. Within this latter group would also include those unable to serve due to not meeting requirements, extenuating circumstances or other factors beyond their control. It is a situation reminiscent of Robert Heinlein’s Starship Troopers—a society divided between citizens, who earned their status through service, and non-citizens, who possess some rights, but cannot vote nor hold public office. If part of the appeal of conscription is the forging of national unity, it is hard to see how dividing society along the lines of the variety of service one engaged in or whether one served at all will help in that regard, not to mention a host of hidden costs that call into question such a program’s feasibility.