North Korea Is Weaponizing the Naval ‘Gray Zone’ Against the South 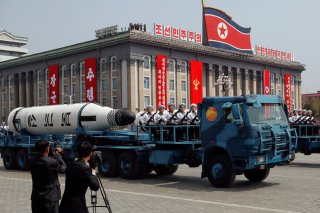 After months of relative restraint, the Korean Peninsula is experiencing a new arms race. Since the announcement of the Medium-term Defense Program in 2020, South Korea commissioned a 3,800-ton Dosan Ahn Changho-class submarine and test-fired a submarine-launched ballistic missile (SLBM) on September 15. The U.S.-Republic of Korea (ROK) missile guideline was terminated in June, freeing South Korea to develop long-range missiles, and the ROK Navy (ROKN) is expected to commission a light aircraft carrier within years. North Korea also test-fired its new cruise missile that flew approximately 1,500 km and recently resumed its ballistic missile testing after a six-month break. While South Korea has been preparing for the future wartime operational control (OPCON) transfer from the United States by acquiring cutting-edge platforms and enhancing its capabilities for autonomous military operations, there has been a lack of debate on a comprehensive strategy to counter North Korean conventional and asymmetrical military threats.

Strategy is not simply about gaining technological superiority over adversaries. As Richard Betts defined strategy, it is a “plan for using military means to achieve political ends.” Before discussing the necessity of new platforms, experts and practitioners in South Korea must carefully examine North Korea’s military strategy and devise tailored operational plans that can best deter North Korean aggression. Because there is no consensus on strategy, South Korea is wasting valuable time overcoming domestic discord on the necessity of certain platforms. Similarly, when South Korea announced plans to deploy U.S. Terminal High Altitude Aerial Defense (THAAD) batteries in 2016, strong domestic resistance delayed the installment of related facilities. The fundamental cause of the delay was the absence of strategy, or the deficiency of a persuasive explanation on the necessity of novel defense systems.

This article intends to facilitate discussions on South Korean military strategy by laying out North Korean capabilities and aims at sea. First, North Korea is absent of a blue-water navy and is focusing on developing asymmetrical capabilities. North Korea has approximately 700 surface vessels but they are mostly small and old. The bulk of its surface ships are high-speed missile boats and patrol ships, capable of conducting operations only in the near seas. Vessels that are considered relatively large are two Najin-class frigates and two Nampo-class helicopter frigates, but the Najin-class frigates were first introduced back in the early 1970s, possessing insignificant armaments, and the Nampo-class frigates cannot compare to the ROKN Dokdo-class nor the Sejong the Great-class Aegis destroyers. Instead, North Korea has approximately seventy submarines; its Gorae-class submarines have demonstrated its capability for launching nuclear-tipped SLBMs. What must be of central concern for the ROKN is, therefore, North Korea’s underwater capabilities.

However, the real question is what North Korea’s objectives at sea are. Compared to South Korea, which has open access to high seas, not only are North Korean waters separated east-west but they are also obstructed by the existence of South Korea and Japan to its south and east. International sanctions have impeded North Korean imports and exports overseas and numerous regimes such as the Proliferation Security Initiative (PSI) have forced North Korea to rely on illegal maritime transshipment of goods. Furthermore, North Korea does not have the necessary naval power to protect its limited sea lines of communication. Therefore, North Korea’s aims at sea cannot be equivalent to the Mahanian concept of “commercial access” to which the American strategy of “freedom of navigation and overflight” is based upon. On the other hand, North Korea is keenly aware of its naval modesty and is likely to have concentrated on developing “anti-access” capabilities.

North Korea’s submarine force is best suited to the purpose of anti-access. Today, underwater detection is a formidable task since the seas are vastly wide and immensely deep. High-end sonars attached to a couple of warships and several buoys installed by surveillance aircraft are insufficient for detection. The only viable measure is to maintain a close watch of berthed submarines and to stay alert once those submarines disappear. In addition to submarines, North Korea also possesses twice as many mine warfare vessels as South Korea, multiple coastal artillery guns, and a variegated set of anti-aircraft missiles such as the SA-2s and the SA-5s to prevent the deployment of adversarial forces into its operational theaters.

In wartime, these assortments of anti-access technologies pose a significant challenge to U.S.-ROK operations at sea. With multiple layers of defensive capabilities, strategic air bombings and landing operations become increasingly difficult and the navigation of aircraft carriers off the coasts of North Korea may be too risky. In other words, another “Inchon landing” that overturned the unfavorable Korean War situation will be impossible in the future scenario. Also, once an outright war erupts in the Korean Peninsula, the potential exchange of nuclear weapons will cloud any other tactical considerations.

Then, can North Korean anti-access capabilities be largely ignored during peacetime? At first glance, North Korean waterways are insignificant as trade routes and commercial traffic is nearly absent above the northern demarcation lines. Ferries regularly sail north to Vladivostok and fishing vessels operate near the northern limit line (NLL) in the West Sea and the East Sea, but are strictly banned from trespassing pre-designated areas and pathways. Chinese anti-access capabilities are particularly threatening since the South China Sea carries approximately one-third of global shipping. However, if the sea lines of communications close to North Korean shores are insignificant, why should we care about North Korea’s anti-access capabilities that are defensive in nature? Paradoxically, it is because North Korea is using them for offensive purposes.

Enter the concept of a “gray zone”—a space between peace and war. It also refers to activities that aim to “achieve one’s security objectives without resort[ing] to direct and sizable use of force.” In the context of North Korea, it is the use of asymmetrical anti-access capabilities to drive a wedge between South Korea and the United States, to weaken the credibility of U.S. commitment, and to eventually drive U.S. forces out of the Korean Peninsula.

North and South Korea are neither in a state of peace nor war. The Korean War ended with an “armistice” in 1953 but has prevented the resumption of war for almost seventy years. Most recently, the two Koreas signed the Comprehensive Military Agreement in 2018 to establish a land/maritime peace zone near the demarcation lines. Despite years of relative peace without a major war on the peninsula, North Korea is taking advantage of the gray zone to achieve its political ends. The Yellow Sea is especially murky. Since the United Nations Command commander General Mark Clark unilaterally promulgated the NLL in 1953, North Korea largely abided by the de facto demarcation line. But during the military armistice commission meeting in December 1973, North Korea demanded prior permission to enter the five islands (Baekryeong, Daecheong, Socheong, Yeonpyeong, and U Island) and in 1977, declared an exclusive economic zone that covered areas beneath the NLL. In addition to diplomatic protests, North Korea provoked armed skirmishes several times in the West Sea, culminating in the sinking of ROKN Cheonan by a midget submarine in 2010.

After 2010, North Korean gray zone operations in the West Sea became increasingly sophisticated. Instead of directly clashing with superior ROK naval forces, North Korea is emulating Chinese artificial island-building in the South China Sea to construct military facilities in contested waters. Representatively, Hambak Island was an uninhabited island before 2017 when North Korea started to install military facilities. Hambak Island is only 8 km north of South Korean U Island and within 60 km of Incheon Airport—one of the busiest international airports in Asia. Not much is known about the exact armaments and purpose of this militarization, but in contingencies, North Korea can readily deploy forces close to South Korea. In 2015, North Korea also installed coastal guns and artillery on other islands adjunct to the NLL such as Gal, Ari, and Changrin Island.

As with Chinese artificial island-building in the South China Sea, North Korea’s militarization of uninhabited islands in the West Sea not only violates the “good faith” of previous agreements with South Korea but also establishes gradual fait accomplis in contested gray areas. Considering that ambiguity, asymmetry, and incrementalism are three characteristics of gray zone operations, North Korea is using its asymmetrical forces in an ambiguous manner to incrementally change the status quo without suffering any severe repercussions. The ultimate goal is to impose limited costs on South Korea, weaken U.S. extended deterrence by engaging in operations that fall short of stated red lines, and eventually drive out U.S. influence from the Korean Peninsula. It is for this reason that Song Kim, North Korea’s ambassador to the United Nations, called on the United States to “take the first step toward giving up its hostile policy,” only days after its test launch of ballistic missiles.

In sum, North Korea perfectly understands its position of weakness in the maritime domain and is emulating China’s revisionist strategy of gray zone operations to gradually overturn the status quo. As such, South Korea must first understand North Korean strategy and respond with tailored measures that prevent the achievement of adversarial aims. The recent additions of 3,800-ton submarines, SLBMs, and future light aircraft carriers will certainly advance South Korean military capabilities. But to reiterate, North Korea perfectly understands its position of technological inferiority and has nonetheless devised a gray zone strategy to achieve its political ends. What ultimately deters North Korea is a reliable nuclear second-strike capability. Will North Korea be deterred by South Korean conventional SLBMs and a slightly bigger carrier than the ROKN Dokdo-class? These are the questions that practitioners must answer before acquiring new platforms and promoting wartime OPCON transfer.