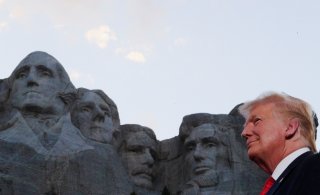 The fallout from the Capitol Riot will no doubt continue for the foreseeable future—and probably longer—so no one who’s not clairvoyant should be overly confident in assessing the consequences. Even the Trump role in the turbulent transition to a Biden administration may wind up looking considerably different to future generations than at present. Still, some major questions raised by these events are already apparent, and some can even be answered emphatically, starting off with the related topic of how I’m viewing my support for many, and even most, of President Donald Trump’s policies and my vote for him in both of his White House runs.

Specifically, I have no regrets on either ground. Like many people, I consider Trump’s words and deeds of the last few weeks to represent major, and completely unnecessary, failures that will rightly at least tarnish his place in history.

All the same, legitimate analyses of many developments and resulting situations need to think about the counterfactual. Here, the counterfactual is a Trump loss to Democratic presidential nominee Hillary Clinton in 2016. And I’m confident that her presidency would have been disastrous in policy terms, ranging from coddling China to moving steadily toward Open Borders immigration policies to intervening militarily more often and more deeply in numerous foreign conflicts of no importance to the United States. It would have been heatedly divisive in political terms, too. For example, there was her grifting behavior in fundraising for the various supposedly philanthropic initiatives she started along with her husband, former President Bill Clinton. Then there was her campaign’s payment for the phony Steele dossier that helped spur the unwarranted and possibly criminal Obama administration investigation of the Trump campaign. Also, her intolerant and extremist instincts would have brought Identity Politics and Cancel Culture to critical mass years earlier than their actual arrivals.

As for the worrisome events of the last several weeks: I don’t regard Trump’s rhetoric at his rally, or at any point during his election challenges, as incitement to violence in a legal sense. But is it impeachable? That’s a separate question because Constitutionally speaking, there’s a pretty strong consensus that impeachment doesn’t require a statutory offense. And since, consequently, it’s also a political issue, then there’s no objective or definitive answer. It’s literally up to a majority of the House of Representatives. But personally, I oppose this measure.

So do I agree that the president should get off scot-free? No. I regard the Trump record since the election as reckless. I was especially angered by the president’s delay in calling on the breachers to leave the Capitol Hill building and the entire Capitol Hill crowd to “go home.” In fact, until that prompting—which was entirely too feeble for my tastes—came, I was getting ready to call for his resignation.

Wouldn’t impeachment still achieve the important objective of preventing a dangerously unstable figure from seeking public office again? Leaving aside the allegations that Trump is “dangerously unstable,” unless he is guilty (as made clear in an impeachment proceeding) of a major statutory crime, including obstruction of justice, or incitement to violence or insurrection, then I’d insist on leaving that decision up to the American people. As New York City talk radio host Frank Morano argued earlier this week, the idea that Congress should have the power to save the nation from itself is both risible and dangerously anti-democratic.

Of course, this conclusion still leaves the sedition and insurrection charges on the table—mainly because, it’s contended, the president and many of his political supporters, which consist of lawmakers who supported challenging the Electoral College votes during the January 6 certification procedure, urged Congress to overturn an election. Others add that the aforementioned and separate charge not includes endorsing violence but urging the January 6 crowd to disrupt the certification session.

First, there’s even less evidence that the lawmakers who challenged the Electoral College vote were urging or suggesting the Trump supporters in the streets and on the lawn to break in to the Capitol Building and forcibly end the certification session than there’s evidence that Trump himself gave or suggested this directive.

Second, I agree with the argument that authorizing a branch of the federal government unilaterally to nullify the results of elections that the Constitution stipulates should be run by the states is a troubling threat to the constitutional principle of separation of powers. This argument has been made by conservatives like Sen. Rand Paul (R-Ky). I’m also impressed with a related argument: that sauce for the goose could wind up as sauce for the gander.

In other words, do Trump supporters want to set a precedent that could enable Congress unilaterally to overturn the election of another conservative populist with something like a second wave of Russia collusion charges? Count me out.

Further, if the Trump supporters who favored the Electoral College challenge are guilty of insurrection or fomenting it, and should be prosecuted or censured or punished in some way, shouldn’t the same go for the Democrats who acted in the exact same ways in other recent elections? P.S. Some are still Members of Congress.

Rather than engage in this kind of “what about-ism” and help push the country further down the perilous road of criminalizing political behavior and political differences, I’d much rather consider these challenges as peaceful efforts—and in some cases, sincere efforts—to insert into the public record the case that these elections were marred by serious irregularities.

How serious were these irregularities? They were very serious and all but inevitable given the decisions (many pre-pandemic) to permit mass mail-in voting. Talk about a system veritably begging to be abused. But was it serious enough to change the outcome? I don’t know and maybe I’ll never know. Two things I do know, however:

First, given the thin Election 2020 margins in many states, it’s clear that practices like fraudulent vote-counting, ballot-harvesting, and illegal election law changes by state governments and courts don’t have to be widespread. Limiting them to a handful of states easily identified as battlegrounds, and a handful of swing or other key districts within those states would do the job nicely.

Second, I believe that at least some judges should have let some of the Trump challenges proceed, if only because the bar for conviction in such civil cases is much lower than for criminal cases; but I can understand their hesitancy because despite this low-ish bar, overturning the election results for an entire state, possibly leading to national consequences, is a bridge awfully far. Yes, America is a nation of laws, and ideally, such political considerations should be completely ignored. But when talking about a process so central to the health of American democracy, politics can never be completely ignored, and arguably shouldn’t.

So clearly, I feel pretty conflicted. What I’m most certain about, however, is that mass mail-in ballots should never, ever be permitted again unless the states come up with ways to prevent noteworthy abuse. Florida, which was the site of epic election procedures failure in 2000, seems to have come up with the fixes needed. It’s high time for other states to follow suit.

Trump will remain influential nationally, and especially in conservative ranks—partly because no potentially competitive rivals are in sight yet, and possibly because Americans have such short memories. But how influential? Clearly, much of his base remains loyal—and given his riot-related role, disturbingly so. How influential? That’s tough to tell. Surely the base has shrunk some. And surely many Independents have split off for good, too. Perhaps most importantly, barring some unexpected major developments, which obviously no one can rule out, this withering of Trump support will probably continue—although the pace is tough to foresee also.

The Republican Party has taken a major hit, too, and the damage could be lasting. In this vein, it’s important to remember that the GOP was relegated to minority status literally for decades by President Herbert Hoover’s failure to prevent and then contain the Great Depression. Those aforementioned short American memories could limit the damage. But for many years, it’s clear that Democratic political campaigns and conservative Never Trumper groups like the Lincoln Project, will fill print, broadcast, and social media outlets with political ads that showcase footage of the riot and Trump’s rally, the effects won’t be trivial.

I’m greatly worried, though, that many of the urgently needed policies supported and implemented by the Trump administration will be discredited. Immigration realism could be the first casualty, especially since so many of the establishment Republicans in Congress were such willing flunkies of the corporate Cheap Labor Lobby for so much of the pre-Trump period, and Open Borders- and amnesty-friendly stances are now defining characteristics of the entire Democratic Party.

The Trump China policies may survive longer because the bipartisan consensus recognizing (at least rhetorically) the futility and dangers of their predecessors seems much stronger. But given Biden’s long record as a China coddler and enabler, the similar pre-Trump views of those establishment Republicans, and their dependence on campaign contributions from Wall Street and offshoring-happy multinational companies, important though quiet backtracking, particularly on trade, could begin much sooner than commonly assumed. One distinct possibility that wouldn’t attract excessive attention: meaningfully increasing the number of exemptions to the Trump China tariffs and remaining metals tariffs to companies claiming that they can’t find affordable alternatives.