Pink Flamingo: The U.S. Military Will Pay for Its Munition Shortage 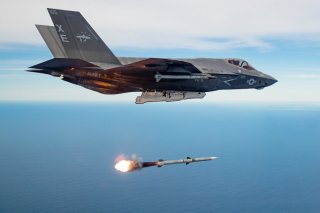 The Biden administration’s efforts to assist Ukraine in its war with Russia shine a light on two serious national security problems: the Department of Defense’s inadequate stockpiles of munitions and the difficulties facing the defense industrial base to respond to quickly increase production of critical items. Unfortunately, these problems were not a surprise to senior defense decision-makers.

It has long been recognized both in and out of government that the Pentagon’s inventory of munitions, particularly precision weapons, is inadequate to support a high-end conflict lasting more than a few months. Nor are the munitions industrial base and supporting supply chains in a position to rapidly refill depleted stocks or surge the production of critical weapons systems. Immediate action is necessary to address these two problems.

U.S. national security elites are continually surprised by real-world events. You might recall the term “Black Swans,” which was a popular concept for a while in defense discussions and publications. This was a phrase taken from a book about forecasting written by Nassim Nicholas Taleb that referred to highly improbable, usually unanticipated events with significant impacts. In defense circles, Black Swans were national security challenges that were difficult to foresee. For example, improvised explosive devices were seen by many as a Black Swan which the U.S. military was initially ill-prepared to counter in Southwest Asia.

But not all unexpected but highly impactful national security challenges are Black Swans. One of this country’s premier defense experts, Frank Hoffman, introduced the complementary term “Pink Flamingo,” which he defined as “a predictable event that is ignored due to cognitive biases of a senior leader or a group of leaders trapped by powerful institutional forces.” In essence, this refers to a surprise situation due to the unwillingness of decision-makers to face up to it.

As a consequence, the United States faces a munitions crisis. The drawdown of U.S. munitions stocks has reached a critical point as demand for these bombs, shells, and missiles has risen dramatically. Unfortunately, decades of underfunding have resulted in a defense industrial base with little surge capacity.

The Ukraine conflict has put what can be described as two Pink Flamingos in the spotlight. The first is the inadequacy of existing stocks of munitions, including both “dumb” bombs and artillery projectiles, as well as an array of guided and precision-targeted weapons. By late summer of 2022, the Pentagon had depleted its stocks of a number of critical munitions and could only promise to provide more of them to Ukraine in a matter of months or even years.

The second Pink Flamingo is the limited ability of the defense industrial base to surge production of critical munitions and weapons. Since the end of the Cold War, the Pentagon has allowed the defense industrial base to shrink and, in the name of efficiency, refused to pay for any productive capacity excess to meet current needs. As a result, with a few exceptions, there was virtually no surge capacity available either to support Ukraine or rapidly fill depleted U.S. munitions stocks.

These are Pink Flamingos because everyone in the Pentagon has known for decades that the existing stockpiles of munitions and missiles were inadequate. In 2019, it was reported that the Air Force used so many Joint Direct Attack Munition (JDAM) guided bombs in Afghanistan and Iraq that it was running short. This is not only true for older munitions but also for the most modern precision strike weapons. Even before the Ukraine conflict began, the Congressional Research Service warned that the Pentagon was procuring advanced long-range precision munitions—the kind that would be most needed in a high-end fight with Russia or China—in such small numbers that the U.S. military would rapidly run out.

Ironically, in the same month that Russia invaded Ukraine, the Pentagon published the results of its study of the state of competition within the defense industrial base. Addressing the condition of the missiles and munitions sector, the report noted that since the end of the Cold War, the number of companies in this sector had shrunk from thirty to only seven. Moreover, the report observed, defense budget pressures had resulted in a chronic underfunding of missile and munitions programs.

Moreover, the existing defense industrial base has a limited ability to rapidly increase production. In the case of Stinger anti-aircraft missiles, the weapon needs first to be redesigned and then tested because some parts have become obsolete. Expanding production is not a matter of money; it is a matter of time. As James Taiclet, the CEO of Lockheed Martin acknowledged, it will take up to two years to double production of the Javelin missile.

What can be done to address the current munitions crisis and prevent a future problem in the event of a high-end conflict? One immediate step, proposed by Rep. Michael Gallagher (R-WI) and others in Congress, would be to initiate multi-year procurement contracts for munitions that maximize production rates. Another near-term action he suggests is to update and expand the authorities of the Defense Production Act to eliminate red tape, provide funding for long-lead items, and support modernizing and expanding production lines. A third step, proposed by others, is to speed up the contracting process and get funds to industry on an expedited basis. Finally and most importantly, as recommended by retired Army Maj. Gen. John Ferrari in a recent article, the military must set realistic requirements for munitions stockpiles based on the certainty of the high rates of expenditures that will be experienced in any future conflict with Russia or China.