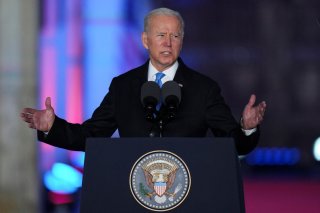 Much has been said and written about the nine words President Joe Biden uttered about Russia’s President Vladimir Putin at the end of his speech given at the Royal Castle in Warsaw, Poland, on Saturday, March 29: “For God’s sake, this man cannot remain in power.” It is quite possible, however, that the Royal Castle speech, and those nine words, will in time pale in comparison to the importance of the words in another speech Biden delivered on the same day.

The Royal Castle speech drew a live audience of thousands and a much larger global media audience. The other speech was made to a rather small group of members of the U.S. 82nd Airborne Division. Other than the nine words, the Royal Castle speech was heavily scripted and carefully prepared. The speech to the troops was unscripted, off-the-cuff, and intended to focus on thanking them for their service. But it did much more.

In addition to thanking the troops for their service, Biden emphasized the importance of their service in that location, in this time. He spoke of the inspiration those in the region draw from the American experience. But, most importantly, he put the service of those troops in the context of history and the changing world in which we all live.

The president told the troops that the world is “in the midst of a fight between democracies and oligarchs.” He challenged comments made to him on a prior occasion by China’s President Xi Jinping, who had expressed the belief that democracies can’t succeed in the twenty-first century because “change is happening so quickly [and] democracies require consensus and we can’t put together consensus as quickly as autocrats can.” This, he said, places at stake “not just what we’re doing here in Ukraine to try to help the Ukrainian people and keep the massacre from continuing,” but what the future will look like for the “kids and grandkids” of those troops, and for their freedom. He noted that in “the last ten years, there have been fewer democracies that have been formed than we’ve lost in the world.”

So, continued the president, what the troops of the 82nd Airborne are “engaged in is much more than just whether or not you can alleviate the pain and suffering of the people of Ukraine.” He described the current conflict as a “new phase” and “an inflection point,” stating that “about every four or five generations, there comes along a change–a fundamental change takes place. The world ain’t going to be the same ... 10, 15 years from now in terms of our organizational structures.”

He then stated the question: “Who is going to prevail?” Will it be the democracies or the autocracies? That, he said, is “really what’s at stake.”

Biden could also have asked, “How will one side prevail?” The U.S. response to the Russian invasion has included support by providing military equipment and humanitarian aid, but it has carefully avoided any U.S. presence on or over Ukrainian soil. That aspect of the U.S. response has received harsh criticism. But international disputes no longer result in dispute settlement only by military means. This is part of the once-in-four-or-five-generation change about which the president spoke. World War II was fought with military weapons. It was brought to an end, in part, through weapons we hope will never again be used. The threat of nuclear weapons, as well as civilized changes in other methods of dispute resolution, have changed the focus of dispute resolution in the twenty-first century. Those changes demonstrate the opportunity for the changes that can make the events in Ukraine the inflection point to which Biden referred.

The war in Ukraine is being fought by military means, but it also is being fought through economic and legal means that did not exist in similar ways during the two world wars of the twentieth century. The United States and its European allies, along with other nations, have effectively used economic sanctions to devastate the Russian economy as well as have dramatic effect on some of those closest to Putin. That process does not produce immediate results on the battlefield or in the cities being indiscriminately bombed, but it has had a clear impact. Economic sanctions often have only limited impact when applied unilaterally, but seldom have so many nations joined in using economic means for a common purpose directed at an arrogant and out-of-touch dictator. The global economic trade system constructed after World War II has contributed to making those efforts effective.

If humanity can move from settling disputes through military means to doing so through economic means, that is an inflection point worth celebrating. But that is not the only development that is occurring in response to the Russian invasion of Ukraine.

It is easy and naturally impulsive to want immediate retaliation against Russian conduct in Ukraine, and to want to do to Putin what he is having his military do to the citizens of Ukraine. But two world wars were fought in the twentieth century with the hope that we would never again have to settle disputes in ways that result in so much death and destruction. No one wants Ukrainians to continue to suffer the way they already have suffered. But neither does anyone want the suffering to be magnified when the number of nations in which military actions occur multiplies.

There is no guarantee that a world war like those of the first half of the twentieth century can be avoided through the economic and legal structures built in the second half of that century. But if the world can use those structures effectively in response to Putin’s actions, and if the result can be that fewer lives are lost and fewer cities are destroyed than would have been the case with a full-scale multilateral military effort, then this inflection point really will make the lives of the “kids and grandkids” of soldiers everywhere better. If we can move from settling disputes through military means to settling disputes through the rule of law, then this once-every-four-or-five-generation change will be a positive one for the entire world, and the people of Ukraine will have led the way to that change for all of us. And Biden’s speech to the troops will prove to have been far more prescient than his words spoken at the Royal Castle in Warsaw.

Ronald A. Brand is the Chancellor Mark A. Nordenberg University Professor, John E. Murray Faculty Scholar, and Academic Director of the Center for International Legal Education at the University of Pittsburgh School of Law.