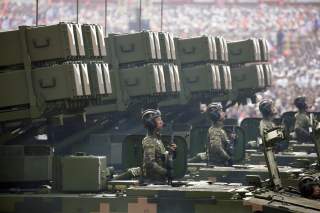 One of the great clichés of politics is the iron belief that there are no permanent enemies or permanent friends, only permanent interests. Upon closer examination, however, Bill Clay’s immortal dictum should be understood in even more radical terms in twenty-first-century geopolitics. After all, nation-states’ interpretation of their interests themselves can dialectically evolve, not to mention the range of interests themselves. This is most especially true in the case of rapidly rising powers such as China.

As perspicacious observers such as Robert Kaplan have noted, “China is only able to act aggressively in its adjacent seas because it is now, for the time being, secure on land to a degree it has never been in its history.” Since the fall of the Ming Dynasty at the dawn of the modern age, China has never been a legitimate maritime power. Within the last generation, however, the Asian powerhouse not only strengthened its economic foundation but also secured much of its land borders, crucially with Russia and Central Asian nations.

As political scientist Taylor Fravel explains in his seminal work, Strong Borders, Secure Nation, Beijing patiently and skillfully resolved seventeen border disputes, including with post-Soviet nations of Kyrgyzstan, Tajikistan, and Kazakhstan as well as Russia, not to mention with Southeast Asian neighbors of Vietnam and Laos. In most cases, China abandoned as much as 50 percent of its original claim to facilitate its big-picture border-stabilization strategy. This historic strategic achievement, overseen by the Jiang Zemin administration, has allowed Beijing to upgrade from a primarily continental power into increasingly a “two-ocean” global force.

The problem with unprecedented strategic success, however, is that it breeds corresponding strategic hubris. This is most especially true in the decade following the 2008 Great Recession in the West, which emboldened Chinese revanchism like never before in the modern age. At first, however, China’s new assertiveness, which further accelerated under President Xi Jinping, rattled and intimidated rivals and near neighbors, especially smaller claimant states in Southeast Asia. Even worse, Beijing managed to, in the words prominent Chinese scholar Yan Xuetong, effectively “purchase” silence and acquiescence among poorer and weaker neighbors to the south.

The Association of Southeast Asian Nations (ASEAN) at times even failed to issue a quasi-critical statement on China’s militarization and “militiazation” of the South China Sea disputes with virtual impunity. The upshot is what the Indo-Pacific Command Adm. Philip Davidson has described as “a great wall of SAMs [surface to air missiles]” across one of the most critical waterways on earth with potentially devastating consequences for freedom of navigation and overflight in the area.

Nonetheless, there are signs of growing resistance as China pushes, with a combination of hubris and self-indulgence, far into the Exclusive Economic Zone of other neighboring countries. Much to the shock of a tone-deaf regime in China, key ASEAN countries have begun to push back like never before. There are signs that Beijing’s policy of co-opting and luring neighboring countries through economic incentives has its limits, especially when matters of national sovereignty and collective dignity are at stake. In rapid succession, Vietnam, Malaysia and Indonesia have begun to draw the line in the seas, warning China of serious diplomatic repercussions amid festering maritime disputes in Southeast Asia.

And while the Philippines under President Rodrigo Duterte has tilted towards acquiescence over confrontation, its earlier landmark arbitration case against China has set an encouraging and successful precedence for other neighboring states seeking to resist Beijing’s worst instincts. The landmark arbitration award in 2016, which marked the culmination of years-long legal warfare (lawfare) by the previous Benigno Aquino administration, made it crystal clear that China’s expansive claims in adjacent waters have no basis in prevailing modern international law.

First came the warning from Vietnam, this year’s ASEAN chairman, when Deputy Foreign Minister Le Hoai Trung openly warned in November that his country is seriously contemplating “[international] arbitration and litigation measures” to challenge Beijing’s excessive claims in the area. Amid a months-long naval standoff over the energy-rich Vanguard Bank, which falls within Vietnamese waters, an influential think tank in Hanoi held a high-profile public forum, where experts openly suggested third party arbitration under the aegis of the United Nations Convention on the Law of the Sea (UNCLOS) to “identify who is right and who is wrong.”

The following month, in December, Malaysia shocked China even further by a bolt-from-the-blue additional continental shelf claim submission at the United Nations, which directly and legally challenges China’s excessive claims across the Spratly group of islands and north of Malaysian coastlines. Just when Beijing thought that it could coax and cajole Hanoi into fruitless dialogue, it faced a direct legal challenge from Malaysia, which, under Prime Minister Mahathir bin Mohamad, has openly criticized both Chinese infrastructure projects and, most recently, expansionism in the South China Sea.

In response to China’s warning against “internationalization” of the disputes, Malaysia’s Foreign Minister Saifuddin Abdullah has characterized Beijing’s claims as ‘ridiculous’ and threatened international ‘arbitration’ to protect its own legitimate sovereign rights in the area. This came only months after Mahathir successfully secured major adjustments and discounts to Chinese projects following a months-long aggressive diplomatic campaign against Beijing’s supposed “debt trap” diplomacy.

Only weeks after Indonesia joined the fray, with Indonesian Foreign Ministry openly accusing China of “violation of [its] sovereignty” amid frequent intrusion by Chinese vessels within its waters off the Natuna Islands, which borders the southern tip of Beijing’s nine-dashed-line claim.

The Indonesian government, invoking the Philippines’ arbitration award, made it clear that China’s claims of having traditional fishing rights within Indonesian waters has “no legal basis” in the UNCLOS.

In response to a dramatic increase in Chinese intrusions into Indonesian waters, no less than President Joko Widodo, long accused of being overly conciliatory to China, visited the contested area and warned Beijing. “We have a district here, a regent, and a governor here,” he said. “There are no more debates. De facto, de jure, Natuna is Indonesia.” All of a sudden, China is no longer surrounded by pliant neighbors, but instead increasingly assertive nations, which have come to terms with their own maritime interests and dangers of China’s unfettered expansionism. In geopolitics, even nations’ interests and their willingness to stand up for them are not permanent.