The Real Roots of Iranian Anti-Americanism 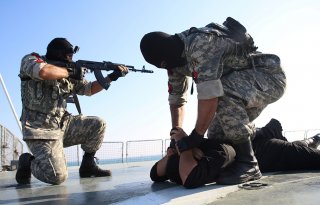 The 1979 seizure of the U.S. Embassy in Tehran shocked not only Americans but also the world. It was an unprecedented event. As the embassy fell and for 444 days after, television transmitted images of raw Iranian hatred toward the United States. Footage of “Death to America” rallies became commonplace, even after the release of the hostages.

Americans immediately began to question the roots of such animosity but were perhaps too credulous as Iranian revolutionary authorities sought to leverage that sense of grievance for policy gain. When on March 17, 2000, for example, Secretary of State Madeleine Albright apologized for the U.S. role in the 1953 coup against Iranian prime minister Mohammed Mosaddegh, Iranian officials responded by demanding reparations. For many American progressives, the U.S. role in the coup was the original sin. Sen. Bernie Sanders (D-Vt.), for example, has repeatedly referenced Mosaddegh’s ouster as the root cause of U.S.-Iran tension. Rep. Ro Khanna (D-Calif.), a vocal progressive voice in Congress, concurs. Former President Barack Obama has also embraced that narrative.

Whether or not Mosaddegh’s ouster was wise, much of the conventional wisdom that leads progressives to blame America is wrong. First, it is incorrect to say the CIA replaced Mosaddegh with the shah. Mohammad Reza Shah was Iran’s constitutional ruler since 1953 (when the British orchestrated the ouster of his father due to Reza Shah’s alleged Nazi sympathies). He had the authority to dismiss the prime minister in order to form a new government as he had done several times previously; at that time, it was rare that a prime minister would serve more than a year. This is why Mosaddegh’s contemporaries interpreted his refusal to abide by the constitution as the initial coup and why they described the premier’s ouster as a “countercoup.”

A greater error among progressives, however, is to assume the current Iranian regime represents aggrieved Iranians. The CIA was not alone in its opposition to Mosaddegh. The idea for his ouster was British, but the rank-and-file officers involved were from within the Iranian army and police forces. The clergy—the predecessors of Iran’s leaders today—also backed action against Mosaddegh due to their distrust of his progressive tilt. This is why, in his memoirs, the late shah referred to the dynamics of the time as the ‘red vs. the black.’ The former referred to the Tudeh, Iran’s communist party with which Mosaddegh had cordial relations while the black referred to the color of the turbans many clergies wore. The irony of Albright’s apology to the Islamic Republic, therefore, implied that she was seeking absolution from America’s co-conspirators.

A further irony for blaming the Mosaddegh ouster for subsequent anti-Americanism is the fact that a decade previously, the United States sent troops into Iran to help secure a supply route to the Soviet Union, an event few today remember but which was a far greater affront to Iranian sovereignty. (Conservatives, however, who have argued that this shows that Iranians would welcome military action are deluded; Iran today is far different than it was eight decades ago and much has happened in the interim).

Progressives are correct that the shah grew more dictatorial after the restoration of his power. In 1961, his White Revolution, a program to transform Iran’s social and economic environment, sparked clerical opposition and led to the eventual exile of Ruhollah Khomeini, who would eventually lead the Islamic Revolution. That said, while many in the West began to question and criticize the shah, few objected to his efforts to make all Iranians equal under the law and enable women’s suffrage. In the decade which followed, however, the shah’s crackdowns chaffed on American liberalism. Carter-era National Security Advisor Zbigniew Brzezinski related in his memories that how “the lower echelons at State, notably the head of the Iran Desk . . . were motivated by doctrinal dislike of the Shah and simply wanted him out of power altogether.”

Even the shah’s human-rights record, however, against the backdrop of U.S. support was not enough to spark the broad anti-Americanism that the regime today embraces. The real root of anti-American sentiment, however, lies elsewhere. Throughout the late nineteenth and early twentieth centuries, both the United Kingdom and Russia targeted Iran with an escalating series of concessionary agreements and exploitive loans in which the shah would receive cash upfront in exchange for exclusive commercial rights in the country. In effect, it was that time’s equivalent of China’s debt entrapment today (and one reason why Iran may be more reluctant to accept loans and terms China demands than many people believe). It was actually American advisors who sought to help Iran at the time unravel Iran’s finances to enable it to preserve its independence. One aspect of the concessions that continued, however, was the diplomatic immunity that the Iranian government granted European businessmen and their families,

In the 1960s and 1970, the shah opened Iran for business, and the economy boomed. One root of the revolution was the subsequent uneven development in Iran. Most Iranians got richer, but wealth inequality also grew. That was not the fault of the United States and is a growing pain that many developing countries experience. The problem was, however, as Pepsi, Bell Helicopter, Ross Perot’s EDS, and other American firms opened in Iran, most demanded their employees to receive immunity. Iranians from the immediate post-Mosaddegh-era often talk about how family members were injured or killed in car accidents, for example, but Americans who may have been at fault were allowed to walk away without consequence. This is one reason why the Iranian-backed Iraqi militias and the political parties that sponsored them took such a hard line on immunity for U.S. forces at the tail end of the Bush-era and the beginning of the Obama administration.

The point here is that while American policymakers may want to amplify the Islamic Republic’s supposed grievances against the United States and show sophisticated understanding by apologizing and offering concessions to make amends, this would mean a distortion of history and a prioritization of perception over reality.  American Enterprise Institute Jeane Kirkpatrick Fellow Wang Xiyue correctly noted in an op-ed published by the Wall Street Journal that “the regime’s hostility toward the U.S. isn’t reactive, but proactive, rooted in a fierce anti-Americanism enmeshed in its anti-imperialist ideology.”

That said, there is a lesson in the troubled history of America’s relationship with Iran: When rapprochement does occur, whether under the current regime as the Biden administration hopes, or in a post-Islamic Republic-era as is more likely, there will be acute sensitivity within Iran to perceptions of legal equality. This in turn suggests that no American should travel to Iran and expect privileged treatment: Iranians will demand that, should any crime occur, real or imagined, that they face the Iranian judiciary. Unless that judiciary reforms and accepts blind notions of justice and modern evidentiary standards, though, premature reconciliation could actually retard relations rather than encourage their positive development.