Days of Blunder: Why U.S. Diplomacy Doesn't Work in Iran 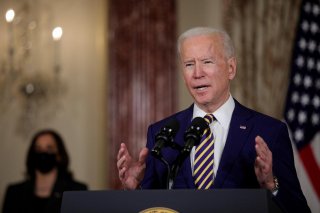 President Joe Biden appeared tough on Sunday, refusing Iran’s demand to lift U.S. sanctions until Tehran again complies with the Joint Comprehensive Plan of Action (JCPOA). But this is simply a tactical dispute. The real story is that by already making unilateral concessions, ignoring Israel, and watering down his rhetoric, Biden will be left with little leverage to fix the JCPOA’s flaws, as he has committed to do, enabling the nuclear Iran that he pledged to prevent.

Last September, Biden declared his “unshakable commitment to prevent Iran from acquiring a nuclear weapon,” echoing former President Barack Obama’s strong 2008 electoral pledge, reiterated early in his presidency, to “use all elements of American power to pressure Iran. I will do everything in my power to prevent Iran from obtaining a nuclear weapon.”

Obama would not live up to that pledge. The JPCOA, as Obama admitted, did not prevent a nuclear Iran but merely delayed it, while ignoring other dangerous Iranian behavior, like developing ballistic missiles.

At the same time, Obama, through talks and leaks, actively sought to stop the one thing, beyond U.S. power, that could have prevented a nuclear Iran: Israeli military action.

Early indications suggest Biden will not live up to his “unshakeable commitment” either.

Indeed, his administration has already backed off his tough language. Secretary of State Tony Blinken, recently told senators that Biden is “committed to the proposition that Iran will not acquire a nuclear weapon.” There is a huge chasm between commitment to a proposition and an unshakeable commitment to action. The policy now seems to be that preventing a nuclear Iran is a worthy, but not necessarily achievable, aspiration.

Biden’s plan is incoherent and fatally flawed. He is intent on reentering the JCPOA even as its restrictions on Iran’s nuclear program have begun to sunset. Then, in an implicit acknowledgment of its flaws, he wants “negotiations . . . [that] strengthen and extend the nuclear deal's provisions, while also addressing other issues of concern.”

Those talks will certainly fail. Even if Biden holds firm, as he promised on Sunday, refusing U.S. sanctions relief until Iran re-enters the JCPOA, he will nevertheless grant it afterward. This will leave Biden to negotiate having squandered crucial U.S. economic leverage.

Biden also seems willing to eschew another form of pressure—indeed, the only one that Iran certainly heeds—the credible threat of force. He did, to his credit, permit continued B-52 bomber regional overflights. However, his sharp criticism of the U.S. assassination of Iran’s Maj. Gen. Qassim Suleimani last year suggests he will avoid pushing back against Iran.

With neither concerted economic nor military pressure, it is unclear why Tehran would agree to the additional restrictions Biden seeks.

Meanwhile, key Biden officials evince little of his commitment to improving the JCPOA.

Calling the JCPOA a “good deal,” Biden’s nominee for Under Secretary of Defense for Policy, Colin Kahl, has dismissed the prospects of a better deal as a “myth” and opposed additional U.S. sanctions. Deputy National Security Advisor Philip Gordon has argued that seeking “a brand-new deal that addresses every problematic aspect of Iran’s foreign policy and blocks its path to a nuclear weapon is a recipe for achieving neither set of goals.” Rob Malley, tapped for Biden’s special envoy to Iran, has opined that the “time-bound nature of some of the constraints” in the JCPOA, the very constraints that Biden wants to extend, “is not a flaw of the deal, it was a prerequisite for it.”

Loath to employ economic or military pressure, Biden will likely achieve little more than returning to the JCPOA, enabling the nuclear Iran he pledged to prevent.

Israel Defense Forces Chief of the General Staff Aviv Kochavi recently made the unusual public declaration that U.S. reentry in the JCPOA would be “bad” and “instructed the army to prepare a number of operational plans” to confront the Iranian nuclear threat “in addition to the existing ones.”

This credible Israeli threat offers Biden the chance to pressure Iran. He should embrace it. Biden could even increase Israel’s leverage by giving it the military tools to prevent a nuclear Iran and prepare for its aftermath, such as greater quantities of precision-guided munitions.

Yet, so far, Biden seems uninterested in truly coordinating with Israel, let alone supporting its freedom to act against Iran. He has not yet made the customary phone call to Israel’s prime minister. He even neglected to mention Israel in his first major foreign policy speech last week.

Biden might want to improve on the JCPOA but he will only return to its mistakes. Biden has time to course-correct, starting with embracing Israel and its military option against Iran, which might yet prevent an unforced, immense U.S. diplomatic blunder.

Michael Makovsky, a former Pentagon official, is President and CEO of the Jewish Institute for National Security of America (JINSA). Blaise Misztal is JINSA’s Vice President for Policy.