Replacing Mattis: 4 Things Trump Needs In His Next Secretary of Defense 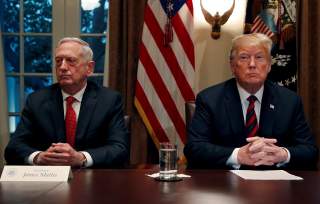 Now is the time for all good men and women to think seriously about what kind of person America needs to install as its Secretary of Defense.

To help guide our thoughts, the resignation letter of Gen. Jim Mattis is a good place to start. It reveals four characteristics that President Donald Trump should look for, to be sure he gets the right leader in place at the Pentagon.

Mattis’s letter flags a criticism the administration should take to heart. The United States must speak clearly and consistently to both allies and adversaries. This is often difficult, given the president’s personal, unconventional style of statesmanship. Yet the president is ultimately responsible for ensuring his administration develops, articulates and implements strong and consistent policies in the best interests of the American people.

The abrupt shift in Syria policy offers a case in point of what happens when the process goes wrong. A permanent American footprint in the country is neither practical nor desirable. The president is right to conclude that, after having defeated the territorial ISIS Caliphate, the U.S. mission should transition to reflect the change in threat.

But the administration must explain its actions, demonstrate its plan is suitable and feasible, and inform Americans how it protects U.S. interests and serves the larger regional strategy. That didn’t happen. As a result, the president’s national-security team was left ill-prepared to defend or implement the president’s policies. As a result, Congress, the American people, and America’s friends and allies, were left surprised, confused and disappointed.

One of the assets Secretary Mattis brought to the Pentagon was his lengthy resume and his reputation. He was widely respected around the world. When he talked, people listened and leaders took him quite seriously. Trump will continue to need an experienced and proven national-security expert at the helm of defense headquarters, someone whose communications skills and credibility will enhance the administration’s coordinated efforts to explain and implement the president’s policies.

On the other side of the coin, Mattis revealed his own limitations in serving the president when he wrote that Trump “had the right to have a Secretary of Defense whose views are better aligned with yours.” Mattis viewed defense policy as “nonpartisan.” It most assuredly is not.

Military operations and defense activities are nonpartisan activities, but defense and security policies rightly reflect the will of the administrations. Political appointees serve at the pleasure of the president to advance his policies.

To both their credit, Trump and Mattis made the arrangement work for two years—but it was not sustainable. As Mattis said, the president deserves cabinet secretaries who share his vision. So his resignation as Secretary of Defense was the good, right and honorable thing to do for both Mattis and the country. Indeed, the manner in which he resigned is a breath of fresh air. Instead of leaking gripes to hostile media as an unnamed source, Mattis left no room for Swamp gossip by publicly explaining the reasons for his resignation. Now President Trump has the opportunity to nominate a new Secretary of Defense whose views are more closely aligned with Trump’s vision.

The president’s will is well laid out in the national-security strategy. Whoever he picks needs to sign on with the president’s agenda. That doesn’t mean being a “yes man.” Officials must give on honest advice and feedback. But when the president makes a policy decision, officials must support the choice as if it were their own—or resign with honor, as did Mattis.

Pick a King of the Hill:

In his letter, the secretary didn’t list congressional relations as one of his big headaches. In part, that may have been because Mattis spent only a modicum of time on the Hill.

The next secretary will have to spend a lot more time there. So Trump should look for someone skilled at working the halls of Congress. The next two years will likely see tough budget fights and contentious debates over policy issues from operations in Yemen to nuclear modernization. In addition, defense will likely see some highly partisan probes masquerading as congressional oversight.

The president will need a leader who is comfortable going to the Hill with sleeves rolled, someone who is ready to wrestle with congressional leaders and fight for the resources necessary to strengthen and grow the  U.S. military.

Mostly what you get from the Mattis letter is that working for Trump isn’t easy. Get over it. There is a nation to defend, and wars to be won. Trump needs a dedicated patriot who serves for no other reason than to provide for the common defense. In that respect, the president ought to be a good partner for a patriotic secretary (as Mattis did with success, despite his final frustration and resignation).

The first two years of the president’s term were anything but a disappointment from a national-security perspective, despite the eventual fallout with the Oval Office.

Together Mattis and Trump did much to improve military readiness. As documented in the Index of U.S. Military Strength, readiness, capacity and capabilities improved this year for the first time in five years. That trajectory needs to continue.

In Europe, the United States strengthened NATO, successfully pressed allies on burden-sharing, conducted more exercises, invested more resources, and proved tougher on Russia than the last two administrations. By being forward-present and forward-leaning, the United States did much to improve transatlantic security. The next secretary has to be committed to keeping it going.

In the Middle East, ISIS lost its Caliphate and the refugee flow dropped to a dribble. The humanitarian crisis ebbed. Iran was pushed back. Friends and allies were reassured. The United States needs to stay on that course.

In the Indo-Pacific region, the United States is now challenging China’s expansionist provocations. Further, the administration is seriously pressing North Korea to denuclearize and doing a remarkable job contributing to stability in South Asia. These are also the right moves.

Trump, by instinct, is neither an isolationist nor an aggressive force looking to remake the world. He seeks the middle ground—the most efficacious means to protect America’s interests. His national-security strategy is a testament of judicious and prudential policies essential to protect America’s freedom, safety and prosperity.

The president now has a responsibility to follow through with both determination and discipline. To accomplish that he needs a sober servant at defense who has the courage not to walk away from tough problems and the wisdom to not be reckless. He doesn’t need an ideologue. He doesn’t need a business person. He needs a solid conservative national-security leader.