The Republican Party Has a New Problem: Itself 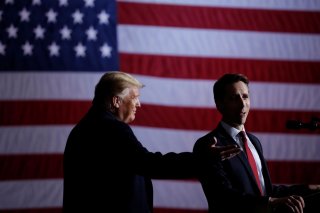 A recent series of concessions on and retreats from hot-button issues by the Republican Party has raised questions about its purpose and future.

Most observers read this as yet another capitulation by the GOP to the National Collegiate Athletic Association, which says it is “closely” monitoring states attempting to restrict the activities of transgender athletes in cross-sex sports.

HB 4042 would dictate on which sports teams transgender athletes can compete in public schools. According to the Houston Chronicle, the measure drew criticism from a “coalition called Texas Competes, which is made up of more than 1,450 Texas employers, chambers of commerce, tourism bureaus and industry associations, on Monday warned at a news conference that anti-LGBTQ legislation will drive out potential new employers and employees.” The NCAA also threatened to cancel future sports championships in Texas.

By April 21, 2021, HB 4042 was dead in the Republican-controlled Public Education Committee. The committee consists of six Democrats and seven Republicans. The wasn’t the Alamo; Texas Republicans chose to lose. “Rep. Dan Huberty, R-Kingwood, the influential Republican who indicated he would not support the legislation at Tuesday’s hearing, did not immediately respond to a request for comment,” the Houston Chronicle reported. On the same day, North Dakota Gov. Doug Burgum, a Republican, vetoed a transgender sports ban.

“North Dakota has fairness in girls' and boys' sports in large part because of the caring and thoughtful leadership of the North Dakota High School Activities Association Board and its members,” Burgum said. “We have every confidence they will continue to ensure a level playing field for the more than 27,000 students who participate in North Dakota high school sports.”

As the GOP continues to fall back from the battle of the biological sexes, it advances with the Democratic Party on hate crime legislation.

On Thursday, the Senate passed a bill introduced by Sen. Mazie Hirono (D-Hawaii) related to anti-Asian hate crimes in a 94-1 vote. Sen. Josh Hawley (R-Mo.) was the lone vote of opposition.

Racial violence is, of course, is bad. But hate crime legislation rests on the preconception that nonwhites must be protected from white violence. However, the evidence shows nonwhites can be overrepresented in interracial violence, which is especially true of hate crimes against Asians. An analysis of New York Police Department data by Heather Mac Donald, the Thomas W. Smith fellow at the Manhattan Institute, bears this out.

“A black New Yorker is over six times as likely to commit a hate crime against an Asian as a white New Yorker, according to New York Police Department data.” According to Mac Donald, New York offers the most extensive data on hate crimes in the country. In 2020, she adds, “blacks made up 50 percent of all suspects in anti-Asian attacks in New York City, even though blacks are 24 percent of the city’s population.” On the other hand, whites made up just 10 percent of all suspects in anti-Asian attacks in 2020 in New York City but account for 32 percent of the city’s population. “If we include black Hispanics in the black category, blacks account for 60 percent of all anti-Asian attacks in 2020.” Mac Donald also points to reams of anecdotal evidence in places like Oakland, California, showing a similar pattern of black on Asian violence.

But in California and New York and underlying Hirono’s bill is the idea that white supremacy is the driving force of anti-Asian hate crimes. Many Republican lawmakers are aware that this narrative is untrue—they also know the law is not really about keeping people safe. Indeed, Sen. Ted Cruz (R-Texas) initially denounced the measure because it "is not designed to do anything to prevent or punish actual crimes.”

“It is instead a Democratic messaging vehicle designed to push the demonstrably false idea that it is somehow racist to acknowledge that COVID-19 originated in Wuhan, China and that the Chinese Communist Party actively lied and suppressed information about the outbreak, allowing it to become a global pandemic,” Cruz added." Sen. Tom Cotton (R-Ark.) joined Cruz in proposing an amendment to the bill that would prohibit federal funding for “any institution of higher learning that discriminates against Asian Americans in recruitment applicant review and admissions.”

It would have been more appropriate to rally support against the law in general. At any rate, the amendment failed, but Cotton and Cruz went along anyway—Cotton even deleted a tweet critical of the legislation.

Kansas Republican Sen. Roger Marshall also supported the bill after opposing it last week on a procedural vote. As backlash mounted, he caved, then prevaricated about the fact. “These changes were impactful enough for me to vote in support of this final package, but this is still largely a messaging bill,” Marshall said in a statement. If that’s true, then why support it at all? Further, Kansas Republican Sen. Jerry Moran, with help from Connecticut Democratic Sen. Richard Blumenthal, widened the bill’s scope to include law enforcement grants.

Hawley is the only Republican who saw this legislation for what it is. “As a former prosecutor, my view is it’s dangerous to simply give the federal government open-ended authority to define a whole new class of federal hate crime incidents,” he said. “My big problem with Sen Hirono’s bill that Senate voted on today is that it turns the federal government into the speech police—gives government sweeping authority to decide what counts as offensive speech and then monitor it,” Hawley added in a tweet. It also incentivizes law enforcement to do just that through grants with strings attached in the form of semiannual summaries to state and local governments of policing activities related to this politicized definition of a hate crime.

The GOP doesn’t seem to worry about what may happen to its constituents by empowering people who view them as a threat, as Hirono does. In fact, they actively work against them.

On Tuesday, a twelve-member jury found Derek Chauvin guilty on all counts for the murder of George Floyd. Sen. Tim Scott and other Republicans nationally celebrated the conviction, promising to work with Democrats on criminal justice reform. “I think our justice system is getting more just, I’m thankful for the verdict and certainly thought it was murder,” Scott said. In the lead-up to that verdict, the Minneapolis Star-Tribune published biographical information of all twelve jurors plus two alternates. “Without naming the jurors, reporters Paul Walsh and Hannah Sayle on Tuesday published enough details about their lives, internet sleuths and local snoops may be able to figure out who they are,” political journalist Debra Heine reported.

Some people might say that media reports influenced the jury. Indeed, around the time details about the jurors became public, Rep. Maxine Waters (D-Calif.) attended a rally at Brooklyn Center where she urged protestors “to get more confrontational” were the jury to acquit Chauvin. In response, Republicans took the contradictory position of condemning Waters' tactics while celebrating the outcome.

All signs point to the conclusion that regardless of the Republican Party’s electoral victories, Democrats end up steering the country’s political direction anyway. Moreover, the GOP consistently adopts a “moderate” position of whatever issues Democrats establish as salient, effectively moving the party to the left on issues over time. Therefore, many Republican voters may be wondering what good is voting for or donating to the GOP if it merely offers the Democratic Party’s platform at a slower rate. And that is indeed a good question.

Pedro L. Gonzalez is a Senior Editor for American Greatness.