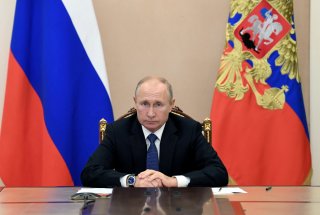 AS SURELY as geese fly south every autumn, the arrival of a new American president resounds with calls for a new policy toward Moscow. To be sure, there have been mistakes in the policies of our past two presidents toward the Kremlin. President Barack Obama thought that he could diminish the national security dangers emanating from Moscow by declaring Russia a mere regional power and naively suggesting that its aggression in Ukraine was a European problem. President Donald Trump seemed to think that burrowing his head in the sand would somehow protect the United States from Kremlin cyberattacks or election interference. There is a certain logic to taking a fresh look at our policy towards the Kremlin as the new administration’s foreign policy team takes up its duties.

Our relationship with Moscow is a tense one. One school argues that difficult U.S.-Russian relations are dangerous because Russia, as our only nuclear peer, has the unique capability to annihilate the United States. Therefore, they argue that we must take a new approach based on dialogue and a new effort to “understand” Russia. This position was argued by a distinguished group of former senior officials and experts in Politico last August.

It is always important, whether dealing with friend or foe, to understand major powers. The right policy towards Russia begins with a true understanding of the country—its capabilities and its intentions. As for its capabilities, besides being one of two nuclear superpowers, Russia has by far the strongest conventional military in Europe and vies with China for having the second most powerful conventional military in the world. Russia also boasts a significant military cyber capacity. But Russia’s economy, while ranking eleventh in GNP, has been sputtering for the last decade, and its relatively large GNP is based principally on natural resources. Massive corruption from the top and substantial capital flight explain this. Russia is a power in decline, but with great military capability.

But the importance of this decline should neither be exaggerated nor minimized, which brings us to the matter of the Kremlin’s intentions. Since his truculent speech at the Munich Security Conference in February 2007, President Vladimir Putin has not hidden his objectives. He believes that the Kremlin got a raw deal in the new security system that emerged at the end of the Cold War, even though Moscow signed the international agreements that defined it. The Kremlin believes that it must enjoy a sphere of influence and, as the sign put it at one of the Valdai conferences, there will be new rules for global order or no rules. In a word, Putin wants to rewrite history.

PUTIN HAS not limited his revisionism to speeches and conferences. Quite the contrary. He launched a cyberattack on Estonia in the summer of 2007, a real war on Georgia in 2008, another on Ukraine in 2014—starting with the seizure and annexation of Crimea and then a not-quite covert war in the Donbas that continues. Since then, Kremlin activities have included interfering in multiple elections in the United States and across Europe; promoting Catalan independence in Spain; trying to block the Prespa Agreement between Greece and Macedonia; a failed coup attempt in Montenegro; massive cyberattacks like the one on SolarWinds in the United States; violations of major arms control agreements; assassination attempts with banned chemical weapons in Western cities; and dubious adventures in Afghanistan, Libya, Syria, and Venezuela. These activities are not one-off events. Instead, they are part of an overall policy designed to destabilize the international system and damage the interests of the United States.

Any realistic—or truly realist—policy towards Russia must begin with this understanding. Any other “understanding” is, in truth, a call to self-deception exemplified in the wonderful German word Putinversteher, or Putin-understander. Seeing Russia’s intentions clearly reveals something important, which is that tense relations with Moscow are not a result of our blundering or provocative policy, but of our decision, finally, to protect American interests from Moscow’s aggressive designs.

It took the United States and the West some time to reach this level of awareness. There was only a short period of criticism and no penalty on Moscow for its war against Georgia. The sanctions for Crimea were mild. Only after Moscow extended its war against Kiev into eastern Ukraine, and its soldiers mistakenly shot down a commercial airline, did major sanctions follow. It took two more years for NATO to boost its deployments among its eastern members and declare publicly that the reason for it was to deter a frisky Russia. And only a year after did the United States see fit to send lethal, defensive weapons to Ukraine. Policy in the Biden administration will be built, as it should be, on this foundation.

WHERE SHOULD it start? President Joe Biden’s first order of business is to repair our relationship with allies, friends, and partners. NATO and the other relationships and institutions that we have built since the end of World War II are great assets and contributors to global stability. Our ability to deter and contain a revisionist Kremlin will be more effective and less expensive if we do it together with our allies in NATO, Japan, South Korea, and elsewhere. The most important task here is to strengthen NATO’s presence in its southeast quadrant. We need to match the buildup in the Baltic region with a greater presence in the Black Sea. This should include more patrols for NATO ships, and greater cooperation with Romania, Ukraine, and Georgia. We also have some work to do within NATO to persuade Ankara and Sofia of the need to do more in support of these efforts.

Greater cooperation with the EU is also essential to ensure a more effective sanctions policy. Sanctions have not persuaded Moscow to pull out of the Donbas or Crimea. But they have imposed a significant penalty on Moscow for its aggression—costing the Russian economy approximately 1 percent of GNP growth a year—and one reason Moscow insists that it is not fighting in eastern Ukraine is to avoid further sanctions. So they serve as a deterrent to further aggression.

First, the United States and EU should raise the price of Kremlin aggression in Ukraine by announcing that every twelve months additional sanctions will be imposed if the fighting in the Donbas has not ended, and Russian soldiers (principally officers), mercenaries, and weapons are not returned to Russia.

Second, the United States and EU should explicitly use sanctions as deterrence by announcing conditional sanctions that would be imposed if Russia 1) escalates in Ukraine; 2) sends troops or other security personnel to crackdown on demonstrators in Belarus; or 3) continues to expand the occupied parts of Georgia further into the rest of the country.

Third, the United States should make clear—and this requires the administration to work with Congress—that an end to Moscow’s aggression in Donbas would lead to a timely end to Donbas-related sanctions. This increases the incentive for Russia to cease aggressive behavior.

Our policy of deterrence and containment also requires that we raise the cost of Moscow’s aggression on the ground. The Russian people have made clear in numerous polls that they do not want their troops fighting in Ukraine; that is another reason why Putin hides the fact that Russian soldiers are in eastern Ukraine. This makes combat casualties a political vulnerability for Putin. Therefore, we should provide more military assistance to Ukraine to deter Kremlin escalation. Our interests would be well served if we increased military assistance for Ukraine to over $500 million a year and provided additional Javelins, fast patrol boats like the Mark 6, Harpoons, or more advanced anti-ship missiles, and air defense systems.

We also need to establish an effective deterrent policy to Kremlin cyber operations and interference in our internal politics and elections. Sadly, U.S. and Western policy on these matters has turned Teddy Roosevelt’s old proverbial saying on its head. We complain loudly and carry a peashooter, which only gratifies the Kremlin.

Instead, we should send a private message to Moscow that cyber and disinformation operations will have a cost. When the Kremlin launches the next cyberattack, we should be ready with our own cyber response inflicting, if possible, slightly more damage. As for disinformation operations or electoral interference, we should play on Kremlin vulnerabilities. We should launch our own information operations (based on true data) revealing the holdings in the West of the massive assets of Putin, his cronies, and other senior Russian officials. Discreetly, we should use our capabilities to make this information widely available on Russian social media. We should also establish a system to monitor and prevent corrupt money from Russia and other places abroad from finding a safe haven in the United States.

THESE MEASURES are not meant as a substitute for dialogue with the Kremlin. It is the precondition for a sensible dialogue that advances our interests. The new team should certainly reach out to Moscow and seek early talks at the secretary of state or national security advisor level. In these talks we should stress: 1) our determination to counter provocative Kremlin policies; 2) our willingness to cooperate where our mutual interests may overlap, such as arms control agreements, as the Biden administration has already done with START, or counter-terrorism or counter-narcotics; and 3) our readiness, if Moscow puts aside its revisionist policies, to establish a cooperative relationship and even a partnership.