Russia’s New Front In the Balkans Heats Up 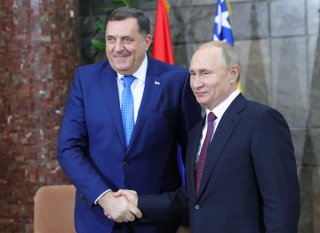 Shortly afterward, British prime minister Boris Johnson named Air Chief Marshall Sir Stuart Peach as his envoy for the Western Balkans. Johnson argued that “The Western Balkans are experiencing the biggest threat to their stability and security in over two decades. We have a responsibility to do all we can to preserve the gains achieved through peace and dialogue—we cannot allow any return to the violence and division of the past.”

Wars in the Balkans traditionally erupt in spring or summer, with political tensions preceding in the months ahead. This year, the usually chilly autumn was marked by heated tensions and warmongering above average even for Balkan standards.

If there is one person who is solely responsible for the deteriorating stability in Bosnia and Herzegovina, which can have an impactful spillover effect, it is Milorad Dodik. The firebrand Serb ultra-nationalist, who serves as a member of the country’s tripartite rotating presidency, has been making headlines over the past decade for openly working toward the destruction and dismemberment of his own country.

Dodik and his henchmen have for years advocated for the creation of their own Abkhazia-styled mini-state which would encompass forty-nine percent of the country. It would be the finishing touch of Serb nationalist aspirations dating back to the 1990s and their genocide against Muslim Bosniaks. To be clear, what Milorad Dodik is advocating for is no different from what notorious war criminals such as Radovan Karadžić and General Ratko Mladić wanted some thirty years ago.

More recently, Bosnian Serbs have upped the ante by pledging to re-create their own army, even threatening to expel Bosnian army troops from their barracks located in the Serb half of the country. If the West tries to intervene, warned Dodik, he would call his “friends” for help. This was a thinly veiled reference to Serbia and Russia, perhaps even Hungary, with whom Dodik has been nurturing ties in recent years.

Serbia’s position towards Bosnia and its open support towards Milorad Dodik and his policies is rather clear. Serbia is unwilling and unable to accept that its imagined dominions are now independent states. As it has never given up on its dream to create a “Greater Serbia,” it continues to fret, posture, and lash out in an attempt to assert its former status. Its drive to dominate the region stems from its implicit assumption of entitlement and exceptionalism.

But why would Moscow be interested in fomenting instability in the Balkans and why is Serbia its loyal ally?

To start with, Russia sees the geographical location of the Balkans as being the soft underbelly of the European Union. The region remains the last significant part of Europe that has not yet fully integrated into the EU and NATO structures, yet borders a number of NATO and EU member states. There are the tit-for-tat dynamics: since NATO has been infringing upon Soviet-era zones of influence in Moscow’s backyard (i.e., Georgia and Ukraine), Moscow feels entitled to reciprocate in NATO’s backyard.

In addition, the Balkan region is located on the crossroads of a hydrocarbon route running from Russia to Turkey and the Black Sea. Moscow knows all too well that energy and geopolitics are intertwined.

Finally, a controlled crisis in the Balkans would keep the EU preoccupied while giving Russia leverage over more important projects, such as invading Ukraine or militarily scaffolding the Belarusian regime.

However, unlike the post-Soviet Central Asian states or the Caucasus, Russia is incapable of physically penetrating the Balkans, hence its reliance on local players. Moscow enjoys a series of local assets including highly placed nationalist Serb politicians, biker gangs, friendly paramilitary militias, murky businessmen, pro-Russian media outlets, and above all the Serbian Orthodox Church. Their combined actions are enough to keep fragile states in a permanent state of latent or low-intensity conflict, something that serves Russian interests.

Moscow has for years been sending up trial balloons to see what it can get away with before hitting hard when the opportunity arises. It seems that the Western silence was taken as a green light.

The EU seems to be distracted and rudderless, absolutely lacking a common approach towards its foreign policy and security issues. The block’s biggest economic powerhouse, Germany, is in a post-Merkel transition, while France, another major player, is busy preparing for next year’s elections. The number of recalcitrant member states, such as Poland and Hungary, is constantly rising. Given the fourth wave of Covid-19, the EU is more concerned with digital Covid vaccine passports than with outlining a cogent response towards Moscow’s hybrid wars.

On the other hand, Washington has made a number of lamentable blunders in the past couple of months, including its disastrous withdrawal from Afghanistan, caving on Nord Stream II, and mishandling the sale of nuclear submarines to Australia so badly that longtime ally France temporarily pulled its ambassador in anger.

The Kremlin interpreted all of this as a lack of a coherent transatlantic strategy.

Russian president Vladimir Putin recognizes the moment, and with the winter in full swing, he is upping the ante by manufacturing a series of concurrent crises. The migrant crisis along the Belarus-Poland border, the gas war with Central and East European states, constant violations of Baltic airspace, the massing of troops along Ukraine’s borders, and the Balkan security crisis are all part of the same hybrid war. His goal is to divide, pressure, and weaken the EU while at the same time testing NATO’s resolve.

Polish prime minister Mateusz Morawiecki, with his country directly affected by the migrant crisis, had no doubts as to who is behind the crisis. ‘‘This attack which Lukashenka is conducting has its mastermind in Moscow, the mastermind is President Putin,” Morawiecki said. Similarly, former Croatian foreign minister Vesna Pusić cleverly noted ‘‘There is no doubt that Russia is the main disruptor in the Balkans, using its local pawns to implement that policy. Its objectives, however, most likely transcend the region and include finding a broader compromise with the EU.’’

Looking at this from a broader perspective, the EU is now surrounded by a belt of instability. Emboldened by the inability of the EU and United States to firmly stand up to its actions, Moscow is set to continue pursuing its strategic goals.

However, it is a highly pernicious illusion to think that the EU has the will and capacity to act in a unified manner against Kremlin’s hybrid wars.

Much like in brokering peace following the Yugoslav wars in the 1990s, the only force capable of confronting Moscow’s designs today is the United States. How the United States responds to these overt military threats will have far-reaching consequences for the security of Europe and the transatlantic alliance.

The United States should start by increasing its military presence in Bosnia and Herzegovina to ensure that the liberal democratic order is maintained and that the country does not slide into conflict. Should Bosnian Serbs declare independence and secede, then NATO will have an Abkhazia-like state on its borders. Second, the United States should send higher-ranking leadership instead of mediocre State Department officials who are merely interested in short-term solutions to ensure quick career promotions. Finally, the Biden administration should push for fast-tracking Bosnia’s accession to NATO. This would anchor the country firmly within the alliance and secure American political investment in the region.

The conflict with Russia cannot be avoided. It has already begun.

Harun Karčić is a journalist and political analyst based in Sarajevo covering foreign influences in the Balkans. He tweets @HarunKarcic.