Securing the Taiwan Strait Will Require More Than Arms 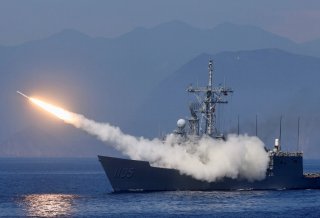 The ghosts of the Soviet-era Sino-Russian axis have come back to haunt American policymakers, who are kept awake by a terrifying prospect: simultaneously repelling Russia in Ukraine and China in Taiwan. Washington must prepare for such a two-front scenario with eyes wide open, should this nightmare become reality. U.S. secretary of state Antony Blinken recently sounded the alarm when he stated China could seize Taiwan on a “much faster timeline.”

Despite strong bipartisan support to defend democracy in both Europe and Asia, the data illustrates the limits of American industrial power.

As the war in Europe intensifies, Washington appears incapable of simultaneously arming both the Ukrainian and Taiwanese militaries. Since Russia invaded Ukraine in February, the United States has provided Kyiv with $18.5 billion in military assistance, including over 1,400 Stinger anti-aircraft systems and 8,500 anti-armor Javelins. Close to one-third of America’s entire Javelin stockpile has reportedly been depleted and, according to the Center for Strategic & International Studies, “it will be many years before the inventory is fully replenished.”

Despite Washington’s commitment to providing Taipei with “arms of a defensive nature” through the Taiwan Relations Act, Taipei has faced arms sales delays due to the Ukraine war, supply chain disruptions, and U.S. bureaucratic “red tape.”

Future U.S. foreign policy prioritization will require hard choices. With America and its allies in the West experiencing rampant inflation, high-interest rates, a looming recession, and underemployment, maintaining existing levels of military aid to Ukraine while supporting Taiwan’s defense will be a daunting task.

The Biden administration has threatened pre-emptive sanctions against China, hoping to deter a People’s Republic of China (PRC) invasion of Taiwan. Such measures alone are unlikely to work. Sanctions didn’t prevent Russia’s invasion of Ukraine and have not yet forced the Kremlin to end the war. The economic weapon has been overused and rendered ineffective through evasions and de-dollarization. The Chinese Communist Party (CCP) has begun to sanction-proof China’s economy, focusing on “independence and self-reliance,” including efforts to upend the U.S. dollar as the global reserve currency through a digital yuan and a SWIFT payment system alternative.

To have any efficacy, pre-emptive sanctions must be highly targeted to specific jugular chokepoints (such as semiconductors and, to a lesser degree, the U.S. dollar) where China still remains uniquely vulnerable. Attempts to isolate China from the global trade system wholesale will likely fail and potentially backfire, damaging U.S. economic relations with third countries and sapping international support for Taiwan’s cause.

Sanctions have a role to play, but Washington must learn the lesson of Ukraine—the threat of economic warfare cannot forestall an invasion indefinitely. Instead, Washington must double down on bolstering Taiwan’s defenses.

With Taiwan Strait tensions worsening since U.S. speaker of the House Nancy Pelosi’s visit to Taipei, and Beijing planning a potential invasion of the island by 2027, according to former U.S. naval commanders, Washington should use its geopolitical capital to help broker a ceasefire in Ukraine and mediate a political solution between Moscow and Kyiv.

Washington should refocus its global efforts on deterring Beijing from invading Taiwan, as such an event would severely diminish America’s global influence, enabling the CCP to seize economic and military hegemony over Asia and approximately half the world’s GDP.

America and its Indo-Pacific partners should initiate a two-prong economic and military denial strategy in the Indo-Pacific to deter China’s hegemonic ambitions and prevent the Taiwan invasion disaster. The economic prong should aim to deepen commercial ties between America and its regional partners. Increasing trade will require greater market access, securing supply chains, and targeted decoupling from China to mitigate the West’s economic dependence on the CCP. Washington must move beyond its “all guns, no butter” approach in the Indo-Pacific, and drive investment to its partners, including helping facilitate private-sector financing for energy security and other hard infrastructure needs.

The military prong should re-divert resources to the Indo-Pacific and arm Taiwan to be mission-ready. Success here hinges on the “porcupine strategy”—leveraging anti-amphibious weapons platforms to exploit the topographical advantages that make the island of Taiwan a natural fortress.

Rather than bristle with easy-to-hit “vanity platforms” like Abrahams tanks and F-16s fighter jets, Taiwan should be stocked with mobile and concealable “shoot-and-scoot” systems that have turned the tide in Ukraine. Taiwan’s mountainous terrain provides the elevation and cover needed for Javelin, FIM-92 Stinger, and HIMARS rocket launcher units to effectively target Chinese vessels crossing the Strait well before they reach Taiwanese beaches.

These platforms are also easier to build at scale, and Washington should leverage Taiwan’s high-tech manufacturing prowess to lighten the burden on the already overstrained American industrial base. Delays in deploying munitions have hamstrung Ukraine's defense. U.S. defense contractors should consider joint ventures in Taiwan so the smaller units, like Javelin and the Stinger, can be built on the island for speedy deployment on the battlefield.

This prong must also leverage the forward projection capability of U.S. military bases in the Western Pacific and its alliance network in the region to credibly deter Beijing. Programs that enhance integrated defense capabilities between Japan, the Philippines, South Korea, the UK, and Australia, must be taken further.

These partners must modernize their militaries and prevent the PLA from reaching parity with the U.S. Navy. Expanding AUKUS to include Japan and focusing on joint training, forward positioning supplies, freedom of navigation exercises, etc., will help maintain a free and open Indo-Pacific.

Only by seeking a solution to the Ukraine conflict and doubling down on this two-prong strategy in the Indo-Pacific can Washington hope to secure the Taiwan Strait and its national interests.

An invasion of Taiwan would be a human tragedy and a strategic catastrophe America will not recover from. The global economy will unravel as air and sea trade routes are suspended, supply chains upended, and semiconductor foundries destroyed. The CCP will forward project force past Taiwan and toward U.S. interests. Breaking through the First Island Chain, China will dominate the West Pacific and dictate terms to American allies South Korea, Japan, and the Philippines. With hegemony over East Asia, China will squeeze U.S. companies out of the region and effectively end the U.S.-led Pacific Rim trade ecosystem that has powered global innovation and growth for decades. In short, the U.S.-led world order will collapse.

Darren Spinck is an Associate Fellow at the Henry Jackson Society and author of Securing the Strait: Engaging Taiwan in the UK’s Indo-Pacific Tilt.

Liam Gibson is a Taipei-based analyst who regularly writes for Al Jazeera, Nikkei Asia, and other regional publications. He is also the founder of Policy People, a podcast and newsletter focused on Indo-Pacific geopolitics.