Securitized Competition with China Is Working Against America 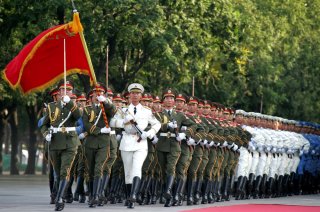 In November 2021, U.S. president Joe Biden and Chinese president Xi Jinping held their first face-to-face meeting on managing great power competition and averting a “new Cold War.” The talks, however, failed to produce a diplomatic breakthrough. There was no agreement on substantive policy issues such as arms control, the coronavirus pandemic, climate change, and trade disputes. While the summit may ultimately ease tensions in the medium-term, the two countries were less inclined to agree on a framework that would encourage a more conciliatory approach. Part of the difficulty appears to be a political atmosphere that is increasingly hostile to diplomacy and a rising disposition to framing competition in security terms.

The occasional rhetoric of non-confrontation aside, the threat perceptions of policymakers in Washington and Beijing are normalizing an existential contest for the twenty-first century. Instead of strengthening existing economic partnerships in the Asia Pacific region, the U.S. foreign policy establishment is more willing than ever to rally allies and lean on security partnerships—such as AUKUS—to buttress the rules-based international order it has traditionally led.

As China has risen to be an economic powerhouse in its own right, the United States has consistently resorted to “securitization” as a policy of choice. The militarization of Washington’s posture in the Pacific predates Biden and his immediate predecessor. Much overlooked is the Obama administration’s once-touted “pivot” to Asia and its aim to reassign U.S. defense priorities to the region. On one hand, the “pivot” meant an increase in U.S. military spending and additional U.S. Navy assets in the region; on the other, China began ramping up its own military spending as well as its island-building efforts to secure its claims and trade routes in the South China Sea.

Consequently, the regional military buildup can exacerbate tensions in several turbulent theatres. For instance, the prevailing security dilemma among the two powers can further escalate military tensions over Taiwan, sparking a conflict with disastrous consequences for regional stability and the world economy.

Overstating security as the framework for competing with Beijing has ramifications: Washington risks not only squandering the political capital that could address economic rivalry but miscalculating the degree to which economic decisionmaking becomes securitized. As a recent white paper from the Institute for Peace & Diplomacy observes, “heeding the reality of multipolarity and ceasing to see the rivalry from a militarist prism would allow the U.S. to capitalize on the rules-based system it has carefully orchestrated to rebuild.”

Meanwhile, the United States has neglected multilateral economic arrangements in the region. Beijing recently filed an application to join the Comprehensive and Progressive Agreement for Trans-Pacific Partnership (CPTPP) that Washington abandoned. Japan, the agreement’s largest economy, has reservations about securitizing its relations with China given its geographic proximity and trade ties with Beijing. Tokyo, however, is open to a more coordinated economic strategy to counter China’s growing influence in the region and hopes for the Biden administration to rejoin the CPTPP, a policy prescription that could foster healthier economic competition.

The Biden administration has so far refused to return to the CPTPP that it partly designed to contain Beijing’s economic clout. Meanwhile, China and much of the Asia Pacific have signed onto the Regional Comprehensive Economic Partnership (RCEP)—a fifteen-member free trade agreement that will tighten regional interdependence at the expense of non-members. Once RCEP is implemented, further economic integration will bring the Asia Pacific closer into China's orbit and enable the Asia Pacific's largest economy to exercise greater influence over the pact’s rules and arrangements from within.

In other words, an overemphasis on security has produced a U.S. strategy that is increasingly incompatible with the economic basis of Sino-American competition. It is vital for China’s competitors to forge a more robust, multi-vectored economic agenda that would counterbalance those regional arrangements wherein they have ceded policy influence to Beijing. Moving forward, American support for such initiatives could be key to their impact and sustainability.

A more thoughtful grand strategy that takes geo-economic realities seriously can coexist with policies that address legitimate security concerns including China’s ascendancy in strategic industries. For instance, New Zealand has carefully tightened its telecom regulations to address security concerns around 5G networks. At the same time, Wellington successfully upgraded its free trade agreement with Beijing this year. Other U.S. partners could strike a similar balance between security and economic imperatives, but it is the latter where U.S.-China competition is most acute.

Using ideology and negative public opinion to lower the risk threshold and securitize Sino-American relations are recipes for escalation and dangerous zero-sum framing of competition. The prevalence of fear-based politics only ensures that the two countries cast each other as existential threats, increasing the prospect of armed conflict while sidelining the real economic drivers of the competition which guide how the rest of Asia both engages and competes with China. Instead, the United States must utilize economic competition to counterbalance China, fostering global economic growth while avoiding the dangerous implications of security competition.

Pouyan Kimiayjan is a Research Associate at the Institute for Peace & Diplomacy. He writes op-eds and policy briefs, hosts expert panels, and provides foreign policy analysis to various media outlets, including for The Hill Times, The Responsible Statecraft, and the National Interest. Pouyan’s research mainly concerns Canadian foreign policy in the Asia Pacific, West Asia, and Europe.

Johnsen Romero is a Policy Research Assistant at the Institute for Peace & Diplomacy and a Yenching Scholar at Peking University. He has previously served as a Policy Analyst for the Canadian Foreign Ministry.