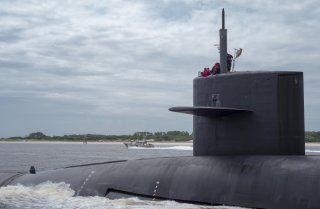 During the debate over the nuclear deterrent policy of the United States, the average person will hear many misconceptions about that policy advanced as “statements of fact.” But these aren’t facts, they are really just ideological tropes. Seven very earnestly held misconceptions tend to dominate the nuclear debating landscape and deserve to be examined.

The first misconception is that national nuclear policies are reciprocal. There is no difference between the policies of the United States and those of Russia and China. There is moral equivalency between all three policies. What would deter the president of the United States is the same as what would deter Russian president Vladimir Putin, Chinese leader Xi Jinping, or even North Korea’s crafty Kim Jong-un.

Well, if a person believes there is no difference between a defensive policy and an offensive one, then that might be true for them. But of course, there is a huge difference.

U.S. nuclear deterrence policy, in the broadest sense, is virtually unchanged since the Kennedy years. America’s nuclear weapons serve to deter nuclear attacks on the United States and its allies and, as a last resort, to deter major non-nuclear strategic attacks. U.S. policy and programs seek to make clear to potential aggressor leaderships that there will be no winners in a nuclear war, and that an act of armed aggression against the United States or its allies risks escalation to nuclear war and the destruction of the aggressor’s homeland.

Conversely, over the past decade and a half, Russian nuclear strategy has evolved into one seeking offensively to menace and intimidate Moscow’s neighbors (many of whom also happen to be our allies).  As part of this, it appears that the Kremlin leadership contemplates the use of low-yield weapons to consolidate aggressive gains accomplished by conventional means. Chinese nuclear strategy remains, as it always has, opaque, but there is strong and emerging intelligence that Beijing is studying and adopting the Russian model.

As a result, a person cannot approach deterring Putin or Xi as if they were benign democratically elected leaders. These men, and the coterie of advisers, courtiers, and mobsters who surround them, are interested in power and in the use of power, both at home and abroad.  If they believe they can commit aggression at no or little cost, then the prize might seem worth the risk. For Putin, the prize is reassembling in some form or another the failed Soviet state, in restricting the freedoms of his democratically-oriented neighbors, and in expanding Russian influence while reducing US influence in Europe.  When he deems the cost to be low, he does not hesitate. The world has watched this occur in Georgia, in Crimea, in Eastern Ukraine, and in Syria. For Xi, the goal similarly is restoring China to great-power status. This goal will likely be accomplished by turning the South China Sea into a Chinese inland lake and by systematically eliminating internal opposition and eliminating ethnic minorities. China will seek hegemonic status over the various South East Asian nations and even ruthlessly stamping out the remnants of the vibrant democracy in Hong Kong, a democracy the Chinese government solemnly swore to respect in its treaty with Great Britain, to achieve this goal. Ultimately, Xi seeks to take over Taiwan. Appealing to the better angels of China’s nature will not alter its course; no, deterrence must rest on making clear to China that if it attacks the United States or its allies, then the costs it will impose in response will be unacceptable to them.

The second misconception is that whatever Russia and China are building and the deployment of these weapons is solely in reaction to what the United States began doing first. It will be easy to dispose of this misconception. A simple glance at the last two decades will quickly demonstrate that Russia and China began modernizing and expanding their nuclear forces around 2010 when the United States was only talking about the wisdom of modernizing our own aging force. Now, almost eleven years later, Russia and China have both deployed, placed in operational service, new intercontinental ballistic missiles (ICBM), submarine-launched ballistic missiles and ballistic missile submarines (SSBN), air-launched nuclear weapons and bombers, and new non-strategic nuclear weapons. Meanwhile, the United States has progressed to simply beginning to build new systems, none of which will be fielded until mid-decade at the earliest.

“Indeed, those worried about the start of a new arms race miss the lesson of the past two decades: despite decades of American and allied reserve—for 25 years our nations have refrained from building anything new—many countries, including Russia, North Korea, and more, have been doing just that,” former Defense Secretary Ash Carter wrote in an op-ed published by the American Interest. “And some of these nations are even building some new types of weapons. So those who suggest that the U.S. recapitalization is a major stimulus to other powers to build more do not have the evidence of the past 25 years on their side.”

A third misconception is that investing in modernizing U.S. conventional forces is far more important than investing in our nuclear forces. This contention breaks down on a number of different fault lines.

First, it ignores the fundamental fact that U.S. nuclear deterrent forces form the backdrop against which all U.S. interactions with Russia and China take place. Whenever either leader contemplates armed aggression against the United States or its allies, they must take into account that such aggression could well escalate into the use of nuclear weapons and that using nuclear weapons could destroy the regime and nation they are so keen to protect and dominate.

Second, all conventional capability, and all other plans, rest on the assumption that strategic nuclear deterrence is “holding.” If strategic deterrence fails, then none of the conventional force is going to operate as designed and might not work at all. Strategic forces establish the ultimate permissive operating condition. One can consider projecting power against a nuclear-capable opponent with an acceptable risk of avoiding a nuclear retaliation, which even an unlimited conventional force cannot deter.

The United States now faces opponents that can unilaterally escalate at will to any level of violence they choose, in all domains, worldwide, and with all instruments of national power, if they perceive the stakes are high enough and if they are willing to take the risk. This applies to all unilateral decisions. The United States has not faced opponents with those capabilities in thirty years. Now, it faces two at the same time who have to be deterred differently.

A fourth misconception is that we no longer need a triad of strategic nuclear forces. The misguided missile comes in several forms. First, there is the assertion that the submarine leg of the triad and the bomber leg of the triad are sufficient for deterrence. That ignores the fact that the bomber leg of the triad doesn’t currently stand alert; although it could be recalled to do so, senior Air Force officers have made clear that it could be on alert only for a very limited period of time because over the last twenty to thirty years the government neglected to procure the necessary spare parts and sustainability items need to support a prolonged alert. Then again, until the current aging air-launched cruise missile is replaced by the long-range stand-off weapon (something also opposed by the progressives) its deterrent punch is obsolescing. The AGM-86B air-launched cruise missile was designed to defeat the Soviet air defenses of the 1980s—not the ultra-modern systems Russia deploys today. Finally, the “no triad” argument overlooks the critical role each leg plays in hedging against the possibility that a technical failure or a Russian or Chinese advance will negate (even temporarily) one of the triad legs. Take away the ICBM force and there is no adequate backup if the United States has issues with either the SSBNs or with the Trident missiles they carry. The no-triad crowd also ignores the vital role our ICBM plays in complicating our enemies’ target planning, a complication that contributes to deterrence.

A related and fifth misconception is that the U.S. ICBM force is on a “hair-trigger” and that it is more dangerous to the United States than it is to its adversaries. This usually begins with the spurious bogeyman. For example, a false alarm could cause a president to order a nuclear strike. To be sure, the United States did experience two false alarms, one due to a chip failure and one due to human error; those occurred in 1979 and 1980. Thus, the country has not experienced a false alarm in over forty years nor does it expect to given the recent improvements to its warning systems.

A sixth misconception is that the required modernization of the U.S. sea-based deterrent can be accomplished solely through building a minimum of twelve new Columbia-class SSBNs. The focus on the SSBNs, while necessary, ignores the fact that the Trident II missile system also requires updating and eventual replacement. The proposed W-93 warhead, just beginning concept development, is needed to rebalance the SLBM fleet and eliminate a looming and dangerous over-reliance on the W76 thermonuclear warhead.