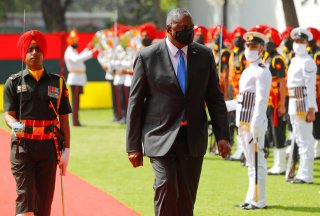 In recent weeks, the Biden administration has undertaken a flurry of diplomatic activity with allies and partners across the Indo-Pacific region. One of its most important goals has been advancing the United States’ relationship with India, a central partner in U.S. efforts to offset rising Chinese power. So far, there are mixed results on the report card. Despite several successes, significant shortcomings, not least the determination to deny Trump administration achievements, raise concerns for the future.

On the positive side of the ledger, the Biden administration has signaled its intent to continue longstanding United States efforts to prioritize and promote the U.S.-India relationship. Its “Interim National Security Strategic Guidance” stated that the United States will seek to “deepen ties” with India, and the administration sent Secretary of Defense Lloyd Austin to New Delhi to meet Indian leaders. It was there that he promised that the two countries would “work together to build greater capacity going forward.” These measures can enhance trust between the two countries, helping to reassure India that, despite the recent change in administrations, the U.S.-India partnership remains on stable ground.

The administration also has shown strong support for the U.S.-India-Japan-Australia Quadrilateral Security Dialogue or “Quad,” participating in the first-ever summit between leaders of its member states. At the meeting, the four countries re-iterated their collective commitment to maintain a “free and open” Indo-Pacific region, based on “democratic values” and “rule of law.” Although it involved players beyond the United States and India, this Quad diplomacy advanced the shared interests of the two countries by enhancing India’s strategic role in the Indo-Pacific region; expanding U.S.-India cooperation beyond the bilateral into the multilateral sphere; and laying the foundation for a four-way partnership, with nodes stretching across the Indo-Pacific region, to anchor regional efforts to offset Chinese power.

Finally, the administration has taken the danger of a rising China seriously, identifying it as the United States’ most urgent strategic challenge, and publicly criticizing repugnant and destabilizing Chinese behavior from Hong Kong to Xinjiang to the South China Sea. Despite India’s longstanding and widely publicized conflict with Pakistan, China is far and away its most urgent strategic concern. If the Indians are to partner closely with the United States, then they must believe that the United States appreciates the magnitude of the China challenge and is determined to meet it. The administration’s willingness to take a tough line on China may help convince the Indians.

Despite these successes, the Biden administration’s approach to the U.S.-India partnership has fallen short in a number of important areas. These could cause problems in the months and years ahead.

For example, although the administration’s interim strategic guidance promises to “deepen ties” with India, the document particularly stresses the importance of United States treaty allies, which it describes as “America’s greatest strategic asset,” vital to the U.S. ability to “hold countries like China to account.” Non-allied partners like India, by contrast, are portrayed as useful mainly for burden-sharing and widening an undefined “circle of cooperation.” They are lumped together in an amorphous second tier of states that includes both India and Vietnam.

Treaty allies are, of course, essential to U.S. strategic efforts in the Indo-Pacific region. But given the size of the region, and pressing resource constraints, allied support will be insufficient to ensure success. Non-allied partners that share the United States’ commitment to a free and open region will be indispensable to meeting the China challenge as well—especially when, as in the case of India, they bring to the table strategically advantageous geography and significant physical, economic, and military heft. To discount the value of these partners because they are not formal allies is a mistake.

Austin’s recent trip to India foreshadowed other potential problems in the U.S.-India relationship. At one level, the visit was unremarkable, stressing the importance of ongoing cooperation, and suggesting new areas for collaboration, such as artificial intelligence, space and cyber. Nonetheless, Austin’s handling of two sensitive issues raised hackles in New Delhi.

First, Austin publicly acknowledged broaching concerns about India’s human-rights record with members of the Indian Cabinet. The Indian government subsequently claimed that any discussion of human rights had focused on shared U.S.-Indian values, rather than on purported Indian shortcomings.  In the Indian view, contentious domestic issues such as human rights should not fall within the ambit of U.S.-India defense cooperation. For the United States Defense Secretary publicly to address such matters, the Indians believe, constitutes both diplomatic clumsiness and unwelcome meddling.

Austin also stumbled over the issue of India’s impending acquisition of Russia’s S-400 air defense system, which could trigger retaliatory U.S. sanctions. Although Austin denied raising the possibility of sanctions, he said publicly “we did address with the Minister of Defense the issue of the S-400.” Indian critics concluded that, as a practical matter, the threat of sanctions had been raised, suggesting that the United States sought to exercise veto power over India’s defense purchases. This also reinforced the impression that the new administration is inclined to indiscretion, publicly raising issues that should be managed privately between the two sides.

Together, Austin’s handling of the human rights and the S-400 matters managed to resurrect the Achilles’ heel of U.S.-India relations—India’s concern that the United States is an unreliable partner, which will punish or even abandon India if it fails to conform to U.S. demands. This concern, which has long plagued the two countries’ relationship, had receded significantly in recent years. Austin’s visit has helped to bring it back toward the fore. If the theme of U.S. unreliability gains traction in New Delhi, it can significantly impede progress in the U.S.-India partnership.

Perhaps the Biden administration’s strangest failing in its approach to India has been its insistence on peddling a falsehood about U.S. diplomacy: That the United States is “back” on the world stage, and by implication “back” in the U.S.-India relationship, after a four-year absence during the Trump administration. In fact, the Trump administration never left the U.S.-India relationship. Rather, it built on a bi-partisan legacy of cooperation from the Bush and Obama eras and made U.S.-India partnership a centerpiece of its strategic efforts in the Indo-Pacific region. As the recently declassified “U.S. Framework for the Indo-Pacific” shows, the administration sought to “accelerate India’s rise and capacity to serve as a net provider of security,” and “solidify an enduring strategic partnership with India.”

Consequently, the two countries reached many important milestones, which would have been impossible had the Trump administration been absent or indifferent. These included signing “foundational” agreements facilitating military cooperation and interoperability, helping to revitalize the Quad, institutionalizing an annual “2+2” Dialogue with India’s Ministries of Defense and External Affairs, easing high-technology export controls by granting India Strategic Trade Authorization-1status, expanding joint military exercises, and reaching $20 billion in U.S.-India defense trade.

The Biden administration will seek to advance the U.S.-India strategic relationship even further. It is fortunate that, in doing so, it can build on the legacy of prior administrations, including that of former President Donald Trump. But this will be difficult to do if the Biden administration ignores the history and accomplishments of the past four years. Drawing on the efforts of previous administrations can help ensure that Biden’s India policy enjoys more successes, and suffers from fewer mistakes, in its next report card.

S. Paul Kapur is a professor in the Department of National Security Affairs at the U.S. Naval Postgraduate School. From 2020–2021, he served on the State Department’s Policy Planning Staff. The opinions in this article are his alone.