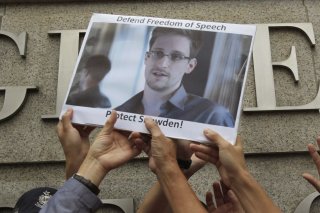 Seven years ago, a government contractor named Edward Snowden first came on the international stage when he provided classified court records to the media about the National Security Agency’s collection of phone records from U.S. companies for intelligence purposes. That was followed by more than a year of even more disclosures to the media of highly classified documents containing highly sensitive and detailed secrets about how and where the U.S. collects intelligence on its allies and adversaries.  In total, an estimated 1.7 million classified documents were allegedly stolen by Edward Snowden, and he was criminally charged for their theft and unauthorized disclosure. Now, President Donald Trump is considering a pardon for Edward Snowden even though his own attorney general is vehemently opposed to the idea.

Snowden claimed his “sole motive [was] to inform the public as to that which is done in their name, and that which is done against them.” However, a 2016 House Permanent Select Committee on Intelligence report judged that Snowden caused “tremendous damage to national security,” and asserted the vast majority of the documents he stole had nothing to do with individual privacy interests but pertained to military, defense, and intelligence programs. The committee said Snowden’s disclosures provided invaluable classified information to America's adversaries.

Snowden has never denied that he has done exactly what he is accused of; in fact, he has since written a book about his actions.

Reasonable people can debate how to run the country’s national security apparatus, what privacy protections are appropriate, and whether to restrict certain intelligence collection activities. They can debate whether the intelligence community’s whistleblowing apparatus is sufficient to protect from harm the employees and contractors to which it applies. But if the intelligence community is to exist and operate effectively as part of a national security system, it must rely on personnel who serve as custodians of America’s most sensitive secrets. Most of the trusted workforce will protect those secrets because they have agreed to do so, because they are patriotic, and because they understand the harm that can come from divulging sensitive information.

Trusted personnel are also made aware there will be grave repercussions—including potential criminal charges and jail time—if they knowingly and willfully divulge highly sensitive information to an adversary, the media, or any unauthorized party.  These consequences serve as both a punishment and a deterrent.

The risk, then, in a president actually pardoning Snowden brings with it the encouragement of similar vigilante behavior that puts at risk the very sensitive information and operations—meaning American interests and lives—that the U.S. national security system is intended to protect. Encouraging such actions—by making them devoid of accountability in one of the most famous and egregious cases of such a leak—could create a snowball effect, with other individuals holding highly sensitive information at their disposal thinking they, too, can be the sole arbiters of U.S. national security and the public good. In doing so, they could cause additional grave harm to the United States.

Sina M. Beaghley is the associate director for the Cyber and Intelligence Policy Center at the nonprofit, nonpartisan RAND Corporation. Previously, she was the director for intelligence and information security issues on the National Security Council staff and a member of the White House Disclosures Task Force.

Marek N. Posard is a military sociologist at RAND Corporation and an affiliate faculty member at the Pardee RAND Graduate School.