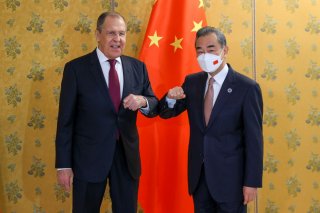 Successive U.S. presidential administrations have begun the monumental task of shifting American foreign policy back towards great power competition—namely with China and Russia. President Joe Biden has framed the competition as a larger contest between democracies and autocracies. This week’s Summit for Democracy, which over 100 countries will attend, may be the most significant framing of the contest yet to take place on the world stage. However, America still falls short when it comes to the strategic clarity that our two adversaries possess in the contest they began years ago to dismantle the U.S.-led order.

While differences exist between them, China and Russia both have a singular vision of their strategic interests and greater ambitions in the international system. Until relatively recently, the United States has been primarily focused on combating terrorism, giving Russia and China the opportunity to act with enthusiasm against U.S. national interests. The lack of strategic focus is to our detriment.

The Chinese Communist Party (CCP) has revealed its vision of global preeminence. Through numerous interlocking strategies, from military modernization to the Belt and Road Initiative, to industrial policies which seek to dominate the emerging technologies and strategic industries of the twenty-first century, China’s leadership seeks to position itself at the center of the global economy and to build military power that can best any nation, including the United States. From Southeast Asia to Australia, the CCP has turned economic engagement into a tool of coercion and influence in an effort to make the world more pliant to its goals. China’s dangerous activities include a process of continuous expansion from Hong Kong to the Himalayas, to the human rights atrocities taking place in Xinjiang, to the campaign to anchor its 5G network in the infrastructure of countries from Europe to Latin America. China’s actions demonstrate that the challenge posed by its authoritarian expansionism did not die with the end of the Cold War.

Russia, in the meantime, seeks to reclaim its role as a global player. Because it lacks the economic heft and the capabilities of China and the United States, Russia conducts asymmetrical operations to punch above its weight class—whether they be state-sponsored influence campaigns or state-sanctioned ransomware attacks. Its military incursions into Ukraine, Georgia, and Syria are strategically chosen to push its territorial position forward and to increase its access to warm water ports without inviting serious international pushback. Its pursuit of the Nord Stream II pipeline is designed to entrench European reliance on Russian energy, allowing Moscow a seat at the table for nearly any conversation in Brussels. Furthermore, its leader, Vladimir Putin, has fused Russian foreign policy to his own efforts to reclaim dignity lost from the collapse of the Soviet Union. As a spymaster president, Putin looks to his intelligence agencies as the chief mechanism to realize his foreign policy goals. Which, first and foremost, is undermining the West and its democratic values.

In light of the challenges posed by these formidable opponents, the United States is now consistently confronted with strategic rivalry in nearly every arena of international security and foreign policy. At the same time, the United States is trying to protect itself from a continuous onslaught of intelligence assaults and industrial espionage from Russia and China, respectively. This predicament places the United States in a de facto defensive position: Washington is seeking to counter China’s economic and military ascent while also trying to stave off an endless Russian assault of disinformation campaigns and cyberattacks.

To successfully emerge from this defensive position, the United States needs to better define its offensive posture and articulate its long-term strategic goals as clearly as Russia and China have. Part of that clarity will come from unabashedly tying American economic power to U.S. values of freedom, rights, and democracy. America must define a strategy to maintain economic preeminence before China can claim this superior position. Mobilization of the global community of democracies from Europe to Asia would tie American power, values, and security together with those of many other nations. It would also place a clear choice to countries where the United States, China, and Russia are vying for strategic influence: “Embrace China and Russia and surrender your freedoms, or choose the U.S. and embrace economic and democratic prosperity.”

The world is on the precipice of a possible new kind of Cold War, where it already confronts a schism between visions for the future: an autocratic one and a democratic one. This dichotomy could apply to numerous elements that affect our daily lives. There likely will be bifurcated 5G networks, Internets, major supply chains, and banking systems. Two systems with two very different outcomes for the people who live under those systems. But the extent of this schism can still be addressed with a clearer strategic posture. To prevent the onward geopolitical march of China and Russia and the dystopian outcome of a world in which adversary systems have truly global range, the United States and its allies must cultivate a modern-day containment strategy towards our authoritarian challengers. It is time for Washington to be as unambiguous about its strategic posture as Beijing or Moscow.

Jack Devine is the former Acting CIA Director of Operations, President of The Arkin Group, and author of Spymasters’ Prism.

Dr. Jonathan D. T. Ward is the author of China’s Vision of Victory and the Founder of Atlas Organization.