The Strategic Dilemma of Taiwan’s Democracy 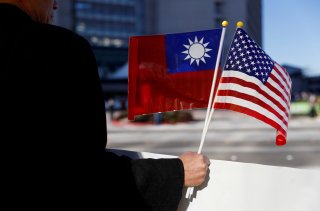 Taiwan’s President Tsai Ing-wen told an American think tank audience via a Dec. 9 video chat that the people of Taiwan are “determined to safeguard our freedoms and way of life. We have made it a priority to strengthen our most valuable asset: that is, democracy.” This message resonates with the audience because the United States has a shared identity with Taiwan. America is a multi-ethnic democracy, as is Taiwan, and that is one of the core elements of the bilateral relationship. It is also a key reason why Washington provides Taipei with diplomatic, material, and moral support against pressure from Beijing.

This was not always the case. Initially, democracy was incidental if not irrelevant to the U.S.-Taiwan relationship for the first half of the relationship. U.S. support for Taiwan largely dates to 1949, which is when Chinese Nationalist leader Chiang Kai-shek fled to the island to escape the impending victory of the Chinese Communists under Mao Zedong. Chiang made Taiwan the base for the “Republic of China (ROC),” his rival to Mao’s regime. When the Korean War broke out, the United States intervened militarily to prevent a Communist Chinese takeover of the island. This led to the establishment of a military alliance with the ROC—recognizing it as the legitimate government of China.

Washington supported Chiang because he was an anti-communist, not because he was a democrat. Thus, the natives of Taiwan (both indigenous and ethnic Chinese) learned the hard way that he was not pro-democracy. Chiang governed the island harshly under martial law and Sinification policies that discriminated against the native population until his death in 1975. It was only under the presidency of his son, Chiang Ching-kuo, that martial law was lifted and Taiwan began the process of democratization and popular government in the late 1980s.

The intervening years of the 1970s and early 1980s brought the normalization of relations between Beijing and Washington via the Three Communiques, which included a series of mutual understandings on the status of Taiwan. Washington agreed to withdraw diplomatic recognition from—and end its military alliance with—the ROC, and shift that recognition to the People’s Republic of China. In the communiques and accompanying statements, it also affirmed that it had “no intention of pursuing a policy of ‘two Chinas’ or ‘one China, one Taiwan’”; and that the United States “expects that the Taiwan issue will be settled peacefully by the Chinese themselves.”

Democracy did not exist on Taiwan when these agreements were reached and thus did not enter into the equation or the U.S.-China normalization of the “one China” framework. However, in the Taiwan Relations Act (TRA) of 1979, the United States reaffirmed its interest in “the preservation and enhancement of the human rights of all the people on Taiwan” and its attention to “any threat to the security or the social or economic system of the people on Taiwan.” But the TRA was a unilateral U.S. law that Beijing has never endorsed or felt bound by.

As Taiwan subsequently started to democratize in the late 1980s, its “national” identity evolved. The Taiwanese people were eager to escape the confines of an authoritarian regime, and a complex domestic polity emerged. Its diverse fault-lines included distinctions between multigenerational natives of the island—including many ethnic Chinese mainlanders—and the more recent mainlanders that Chiang had brought with him to form the Nationalist regime; and between the historically dominant Nationalist (Kuomintang) Party and the opposition Democratic Progressive Party (DPP) that emerged with a distinct local Taiwanese identity. Overlapping this political spectrum was a range of views on how to deal with Beijing, and on whether Taiwan could or should become formally independent of mainland China (thus unilaterally exiting the Chinese Civil War that Chiang had also brought with him from the mainland). One consequence of this evolution of Taiwan’s politics and identity was that it made obsolete the notion that “the Chinese themselves” would ultimately resolve the cross-strait dispute. This is because a growing percentage of people on Taiwan did not view themselves as “Chinese,” and in any event, the people of Taiwan had not been consulted during the U.S.-China normalization process. Leaders in both Beijing and Taipei continued to talk about the goal of peaceful resolution of their dispute on mutually agreeable terms, but the differences between the two political systems—and especially the emerging plurality of views within Taiwan on cross-strait political and identity issues—made that increasingly problematic. And that plurality of views became a central element of the discourse in Taiwan’s budding democracy.

The United States responded incrementally to the evolution of democracy on Taiwan and the cross-strait tensions it generated. Washington’s “Taiwan Policy Review” of 1994 began the process of expanding and strengthening U.S.-Taiwan interactions and U.S. support for Taiwan’s international profile. This process continues today: Assistant Secretary of State David Stillwell in August 2020 outlined the latest measures to “upgrade” the U.S.-Taiwan relationship.

One of the most substantial elements of the U.S. response to Taiwan’s democratization was the incorporation into U.S. policy statements, starting in the late 1990s, of the position that the China-Taiwan dispute should be resolved not only peacefully but also “in a manner acceptable to the people of Taiwan.” Crafted by then Chairman of the American Institute in Taiwan Richard Bush in 1998, this position has since been reiterated by U.S. presidents and other senior officials and has remained an integral part of U.S. policy toward the Taiwan issue.

But here’s the problem: although Taiwan’s democratization has fundamentally altered the U.S.-China-Taiwan dynamic, it neither negates nor automatically supersedes the prior understandings between Washington and Beijing on how Taiwan should be handled. History cannot be erased by more recent history. Indeed, the Taiwan Policy Review of 1994 and all subsequent U.S. policy statements have routinely reaffirmed American commitments under the Three Communiques and reiterated Washington’s “one China policy.” Moreover, Chinese leaders in Beijing—who fundamentally distrust democracy—have never accepted a role for it in determining Taiwan’s future. (They have given lip-service to the notion that the cross-strait dispute should be resolved in a way that is acceptable to people on both sides of the strait; but this is essentially meaningless because the PRC regime would dictate what was acceptable to the people on the mainland.) Although Washington views the idea that the cross-strait dispute should be resolved “in a manner acceptable to the people of Taiwan” as an acknowledgment of reality, Beijing almost certainly has viewed it as a unilateral moving of the goalposts by Washington—and certainly not as part of the original U.S.-China normalization deal.

Taiwan’s democratization arguably created a paradoxical dilemma for U.S. policy: Washington fully supports democracy on the island but cannot support Taiwan’s independence—unless it is prepared to risk its relationship with Beijing. And as long as Taiwan’s democracy is a potential vehicle or rationale for either pursuing de jure independence or rejecting any version of unification, Washington is at odds with those in Taiwan or the United States who equate the island’s democracy with national sovereignty or self-determination and is constrained from supporting them. This is because of U.S. commitment to Beijing not to support “two Chinas” or “one China, one Taiwan.” Moreover, this dilemma has been reinforced by Taipei’s incremental retreat from the “one China” framework—starting with President Lee Teng-hui in the late 1990s—which has opened a potential fault-line with Washington’s “one China” policy.

This is the historical trap in which Taiwan—and U.S. policy toward Taiwan—has been caught: the island’s status and future are being held hostage by forty-year-old agreements between Beijing and Washington to which Taiwan was not a party, and thus does not wish to be bound. In some ways, it is similar to the historical trap Palestine has long struggled with, in which its self-determination has been compromised by great-power politics. At the very least, both situations have eluded easy solutions, partly because of proponents on both sides of the sovereignty issue who reject any form of compromise.

Taiwan’s democracy deserves to be championed by the United States, and preserving it should be a key U.S. objective. Moreover, Taiwan should not perpetually be held captive to the U.S.-China rivalry, with Taiwan always subject to being used as a pawn between them. This should not be a case of Thucydides’ maxim that “the strong do what they can and the weak suffer what they must.” But Beijing’s historical position cannot be denied or wished away, nor can the existence of the historical dilemma that Taiwan’s democratization created for Washington.

If a solution to this conundrum is possible, then it will require both acceptance of the reality of the hands that have been dealt, and creative thinking aimed at promoting cross-strait mutual understanding—and probably some kind of accommodation. All three parties—Beijing, Washington and Taipei—will need to reassess their positions and their wish lists.

One thing Washington has continued to do is make it clear to Beijing that the mainland’s approach to Taipei in recent years has been counterproductive. Rather than coercion and intimidation, which reinforces Taiwan’s resistance and lack of interest in negotiation—let alone unification—Beijing needs to offer incentives and proposals to Taiwan which its people would find acceptable. A recent task force report from the Center for Strategic and International Studies (CSIS) recommended that “US policymakers should consistently stress to PRC officials that Taiwan is a genuine democracy in which the people’s views will ultimately determine Taiwan’s choices about its future.” Beijing probably will not achieve a peaceful resolution that does not address this fact. In addition, China’s regional and global image, and East Asian regional security, would benefit immensely from Beijing’s demonstration of a flexible, creative, and confident non-military approach to Taiwan. Unfortunately, its recent treatment of Hong Kong has not been encouraging in this regard; on the contrary, it has only reinforced resistance on Taiwan to Beijing’s “one country, two systems” model for unification. But the Hong Kong example underscores the crucial importance of the path Beijing should pursue if it is genuinely interested in a peaceful resolution with Taiwan.