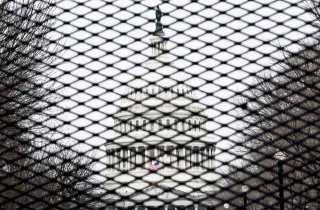 Civil libertarians concerned about the National Security Agency and potential surveillance from other bureaucracies in the executive branch might also consider worrying a little about Congress and whether it’s OK for a House committee to bypass transparency protocols to obtain the phone and text records of lawyers for the opposition, a journalist, and another member of Congress.

So, what are the limits of congressional surveillance? The D.C. Circuit Court of Appeals might provide some parameters to that, after arguments last month in a Freedom of Information Act lawsuit.

Judicial Watch, a conservative government watchdog group, sued the House Intelligence Committee and its chairman, Rep. Adam Schiff, D-Calif., for the secret subpoenas to AT&T and Verizon in an overlooked legacy of the first Trump impeachment saga.

In 2019, the committee Democrats got the data on then-President Donald Trump’s lawyers Rudy Giuliani and Jay Sekulow; John Solomon, a right-wing reporter who became entangled in the Ukraine scandal; the committee’s ranking member Rep. Devin Nunes (R-Calif.), and lawyer Victoria Toensing among others who were unaware Congress was gathering their personal data.

Regardless of whether one considers one or all of these people to be unsavory doesn’t matter. Republicans could win the majority one day and do the same thing to Democratic players in a politically charged investigation. Moreover, it particularly raises obvious First Amendment concerns when government goes after a journalist’s communication with a source.

This also sparked the interest of FCC Commissioner Brendan Carr, who wrote Schiff last year: “At the same time, courts long ago established a process for Americans to seek judicial review before Congress obtains and then publishes documents in response to a congressional subpoena. The Committee created out of whole cloth a secret and effectively unreviewable and unchecked mechanism for obtaining call records on any and all Americans.”

The committee majority’s 2019 impeachment report was largely a rehash of what was already known. But the secretly obtained call and text records were the lone exceptions. The records don’t show the contents of the conversation, only who they spoke to—not so different from the sort of metadata Edward Snowden ratted out the NSA for capturing.

The committee is claiming “sovereign immunity;” and privilege under the “Speech or Debate Clause” to not release any information. This week, Judicial Watch released the transcript of the oral arguments before the U.S. Court of Appeals for the D.C. Circuit in late March.

“Congressman Schiff secretly subpoenaed the phone records of a number of private citizens from telephone companies,” Judicial Watch attorney James Peterson argued to the appeals court. “He did not provide notice to these individuals in advance that their phone records were being sought. He did not subpoena the phone records directly from the citizens. Instead, he subpoenaed the phone companies for the records, preventing any opportunity for the private citizens to seek court review, as would happen in any other case in where the government is seeking this kind of information about any citizen.”

Congress isn’t typically bound by FOIA, but Peterson contends the committee’s actions were “unprecedented and illegitimate.”

House Democrat lawyer Todd Tatelman argued there was little public interest in making more information public and said two interests of the committee should be protected.

“One is, you know, making sure that its investigative sources and methods and its decisions about its investigative process would need to be protected, but also, there’s likely to be substantial privacy interests on the part of the many people whose numbers, phone numbers may have been sought as part of this inquiry,” Tatelman told the three-judge panel.

“Well, I do think it’s, if not ironic, noteworthy that one of the interests you've just put forward is the invasion of privacy when the whole claim of Judicial Watch is that this committee invaded the privacy of private citizens in the first place,” Henderson said.

Still, this is also largely a matter of individual rights. It’s not difficult to see how allowing Congress to target the communication records of private individuals would lead to no place good. Certainly, some were in the former president’s orbit. It’s a stretch to say that others were.

Verizon and AT&T likely presumed they better play ball upon seeing a congressional subpoena. But, as a general matter, Americans don’t like the notion of these companies making private data available. As Carr noted, the FCC has considered heavy fines against telecom companies for releasing data to third parties.

Courts are sometimes cautious about meddling with executive vs. legislative disputes. But this is clearly not a typical instance of congressional oversight, and if deemed acceptable, will happen again, with either party depending on who has the majority.

To be clear, the U.S. Court of Appeals for the D.C. Circuit isn’t deciding whether the House can do this again. But, if sunlight is the best disinfectant, then requiring an extra layer of transparency—in this case forcing the committee to make the controversial subpoenas available—could be a future deterrence.