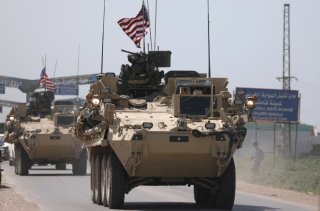 THOUGH HE is not the first American to question the U.S. presence in Afghanistan, President Joe Biden’s rationale for leaving reveals a broader problem with how Washington is fighting its Middle Eastern wars. Much as George W. Bush’s Afghan war evolved from a campaign of revenge and counterterrorism into a nation-building enterprise, Barack Obama’s intervention in Syria expanded far beyond his administration’s original intentions. It is imperative that the Biden administration aggressively appraise its strategy for Syria to ensure that U.S. policy is actually advancing American interests in the Middle East. If not, it must immediately be revised with an eye towards producing the conditions for an honorable U.S. exit. To do otherwise will only guarantee that Syrians and U.S. allies alike are left in the lurch once Biden, or a future U.S. president, ends what has ineluctably become yet another U.S. “forever war.”

U.S. INVOLVEMENT in the Syrian conflict began in earnest in 2013, two years after Syrian president Bashar al-Assad began a brutal crackdown on protestors that provoked a civil war. Although the Central Intelligence Agency (CIA) had been actively advising America’s Middle East allies on aiding Syria’s rebels since 2012, President Obama was hesitant to directly intervene due to fears of mission creep and inadvertently arming terrorists. But Assad’s viciousness and pertinacity in response to demands for his resignation exhausted Obama’s patience. Obama ordered the CIA to launch Timber Sycamore, a clandestine operation to train and provision Syrian rebels in order to force Assad from Damascus, even as he vetoed more vigorous proposals to punish the besieged dictator.

Timber Sycamore was a tactical success, training and arming thousands of fragmented Syrian fighting factions who made impressive territorial gains and, according to Washington Post columnist David Ignatius, killed or wounded more than 100,000 Syrian Arab Army or regime-allied forces. By 2015, CIA-backed forces had captured such extensive Syrian territory that the opposition began to seriously imperil the Syrian Alawite heartland along the Mediterranean coastline and, increasingly, Damascus itself. Both Assad’s enemies and allies took notice: while CIA officers anxiously spoke of a “catastrophic success”—where Assad would be toppled without a sure moderate successor to replace him—the regime’s allies sprang into action. Tehran dispatched Islamic Revolutionary Guard Corps major general Qassem Soleimani—whom Donald Trump would assassinate in a January 2020 airstrike—to Moscow with a strategy to save Assad, and the Russians, which had been covering for Assad at the United Nations, answered with a massive military intervention. Russian Air Force jets began flying over Syria and, in what the Wall Street Journal called a “direct challenge” to the Obama administration, forged a new balance of power by methodically targeting the CIA’s proxy forces and other “terrorists.” The rest is history. Russia not only saved Damascus from defeat but cemented its forward-deployed military posture by signing a number of permanent basing agreements with the Assad regime, engendering perennial Western protestations of Russian “malign influence” in Syria. What began as a tactical triumph ended as a strategic failure.

ISIS’ genocidal blitzkrieg across Iraq and Syria had not factored into the White House’s Syria strategy, but it diverted attention from Obama’s impotent response to Assad’s crimes and provided Washington with new opportunities to shape the conflict. In the summer of 2014, the U.S. military began pummeling ISIS-held territory from the air while seeking out local partners that could supplement its ground game. After Ankara spurned a U.S. request to send in Turkish troops against ISIS—instead opting to enable the terrorist menace against Damascus—the Obama administration initiated the Syrian Train and Equip Program, a Congressionally-approved Department of Defense venture to train a vetted anti-ISIS rebel force of 8,400 soldiers with Turkish, Jordanian, and Saudi Arabian assistance. However, within thirteen months, the program was dead: Congress deemed it a “total failure” after $500 million had been spent training fewer than sixty fighters, many of whom were promptly routed by extremists and lost or surrendered their U.S. weapons to ISIS and the Al Qaeda-aligned Nusra Front. In October 2015, the Obama administration pulled the plug on the Pentagon program and began looking elsewhere for indigenous, moderate proxies.

Since Syria’s Sunni Arab opposition had proved itself generally unwilling to adhere to the Obama administration’s official policy of only fighting ISIS—instead exhibiting Turkey’s similarly unyielding preference to topple the Assad regime—Washington partnered with the Syrians who were already battling the jihadist caliphate, and in September 2015 the Defense Department began backing the Kurdish and Arab fighters that would comprise the Syrian Democratic Forces (SDF). Although U.S. support for the SDF fashioned a highly effective anti-ISIS force, it also inadvertently incited a standoff with Turkey, as Ankara viewed—and continues to view—the secessionist Kurdish People’s Protection Units (YPG) that provide the bulk of America’s on-the-ground allies as a dire threat to its territorial integrity and national security. As one State Department official told Foreign Policy, this became “a nuclear bombing waiting to go off.”

Nevertheless, for the Obama administration, fighting ISIS brought clarity to an otherwise tumultuous Syria policy. Throughout his tenure, Obama unsuccessfully sought regime change in Damascus by championing a deadlocked UN-backed political process, sanctioning the Assad regime, and tepidly abetting armed resistance. However, the president concurrently endorsed the conviction that Syria had “no military solution”—rejecting kinetic reprisals in response to Assad’s use of chemical weapons and eschewing the establishment of a formal no-fly zone, even as the White House lamented massacres committed by Assad’s air force and as U.S. fighter jets had de facto control of large swaths of Syrian air space. But this political disarray did not hinder the U.S. military’s anti-ISIS operations, which expanded with great success. Fighting ISIS, therefore, became the focal point of Obama’s Syria policy, and U.S. strategy shifted in kind. For example, the United States, which at one time myopically weighed leveraging ISIS against Damascus and its allies, ultimately changed tack and began cooperating with Russia and Iran to defeat the shared terrorist threat.

AFTER INHERITING Barack Obama’s policy confusion, Donald Trump espoused both continuity and change in Syria. On the one hand, the new president kept ISIS as the cynosure of U.S. policy with the intention of extricating the United States from the conflict. But, on the other hand, Trump nearly leaned into regime change when he directed the U.S. military to strike a Syrian air base and considered assassinating Assad for again using chemical weapons in the spring of 2017. Nonetheless, by that summer, the White House clarified its agenda. The president ended the CIA’s support for Syria’s anti-Assad rebels—lambasting it as a “massive, dangerous, and wasteful” program—but also loosened the Defense Department’s rules of engagement and increased the number of deployed U.S. soldiers to aggressively roll back ISIS’ caliphate. The administration continued America’s military partnership with the SDF—even approving direct U.S. arms shipments to the Kurds for the first time—while repeatedly stressing to both its leadership and Turkey that the relationship was, in the words of former Defense Department official Dana Stroul, “temporary, tactical, and transactional.” It did little to mollify Ankara’s anger, but by December 2018, enough progress had been made that Trump declared a total victory. “We have defeated ISIS in Syria,” the president announced on Twitter, “my only reason for being there during the Trump Presidency” (emphasis added).

It quickly became apparent that this “mission accomplished” moment was anything but. Trump’s snap announcement that the United States would be leaving Syria emitted global shockwaves and warnings that, absent U.S. pressure, ISIS would regenerate. The president’s civilian and military advisors lobbied hard against a total withdrawal and won; the U.S. presence was only cut by half to 1,000. National Security Advisor John Bolton soon proclaimed that rather than leave, the United States would remain in Syria until ISIS was defeated and the Syrian Kurds’ safety was ensured, and he echoed Secretary of State Mike Pompeo’s promise that Washington would “expel every last Iranian boot” from the country. Syria’s civil war, Special Representative for Syria Engagement James F. Jeffrey affirmed, had “become a great-power conflict.”

As the Syrian conflict assumed great power dimensions, U.S. military efforts intended to disrupt ISIS were recast as leverage against Russia and Iran. The U.S. military outpost at Al Tanf, which sits along the Syrian-Iraqi-Jordanian tri-border area, is illustrative of this evolution. In March 2016, U.S.-backed rebels captured Al Tanf from ISIS and began using it as a staging ground to secure the Iraqi-Syrian border area. However, when ISIS left, the United States stayed. Despite Washington’s assertions that its posture in the region is all about ISIS, it has long been apparent that the United States is utilizing the Al Tanf garrison, which straddles the Baghdad-Damascus highway, as a base to strangle the Syrian economy and disrupt an Iranian land bridge to the Mediterranean Sea. In fact, General Joseph Votel, then the commander of United States Central Command, conceded during a 2018 visit to Al Tanf that the U.S. military’s “defeat ISIS mission” was having “an indirect effect” on Iran and its proxies “malign activities”—a remarkably modest reading of what Jeffrey specified was the Trump administration’s “dual purposed” strategy of countering ISIS while “denying terrain and resources to the Assad government and its allies.”