Taiwan Should Be the Target of U.S. Vaccine Diplomacy 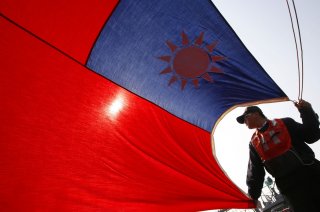 As the United States was grappling with the first wave of coronavirus, reaching a peak in April 2020, one country put two million high-quality face masks on planes and sent them to America. This gift from Taiwan occurred as it became clear the United States was dangerously reliant on China for protective equipment.

No one will ever know how many medical providers’ lives were saved by Taiwan’s gift during those early days of the pandemic before researchers fielded effective drug treatments and vaccines. Despite its proximity to China, Taiwan had successfully controlled coronavirus. That reality combined with its ability to mass-manufacture masks gave the pro-American government there the confidence to share.

Now the situation is drastically different and Taiwan and other Pacific partners need America’s assistance. The country now has community spread of coronavirus, and while numbers are still low compared to surges in the United States or Europe, Taiwan is enduring a shutdown similar to those that harmed the economy during the early epidemic in the United States. According to Bloomberg, Taiwan has given a number of vaccine shots equal to less than one percent of its population.

China is a culprit. On May 19, a spokesman for Taiwan’s president said that “Taiwan access to vaccines continues to be slowed down by Chinese interference, while they insist we buy Chinese-made ones.” Beijing is hoping for a propaganda coup by forcing the country, which China frequently threatens with “reunification,” to accept its own dubious vaccine.

Specifically, Taiwan had arranged a significant order of vaccines from BioNTech SE, the German company that partnered with Pfizer to bring one of the first effective vaccines to market. After agreeing to sell to Taipei, BioNTech then demanded Taiwan not call itself a country in media related to the sale. Even after Taiwan agreed, the deal fell apart, reportedly due to pressure from Beijing.

With more than half of its population having received at least one dose of a vaccine, plus untold millions of others with at least medium-term immunity from having had the disease, the United States is now reaching the point where the coronavirus has dropped to extremely low levels. This is demonstrated by an average death rate from the disease that is now lower than at any point since the first wave of infections in the spring of 2020. For that reason, the Biden administration has begun offering to divert some of America’s excess orders to other countries in need. U.S. allies and partners in the Indo-Pacific region should be the priority. In addition to Taiwan, Japan, Australia, the Philippines, and Vietnam also have low vaccination rates. Singapore is faring better, but also has reduced economic activity. Japan is increasing restrictions with just two months to go until the delayed summer Olympic Games.

Given America’s competition with China, which ranges from a military standoff in the South China Sea to the soft-power battle for hearts and minds throughout East Asia and the Pacific, the United States should prioritize the distribution of excess vaccines to this region. Doing so will not just offset China’s influence operations. It will also help ensure that the important economies that counterbalance China will not lose up to half a year with shutdowns while the rest of the world (including China) is reopened.

Washington should start by pressuring U.S. companies to prioritize Taiwan and divert its own excess doses. In a year when shortages of goods like semiconductors from Taiwan have impeded the U.S. economic recovery, the need for this step should be clear—and will enhance U.S. alliances.