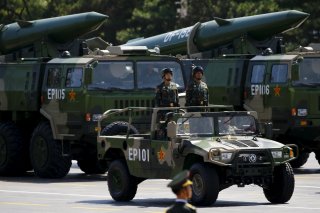 The fastest track to bloody war between China and the United States runs through Taiwan. If the current crisis provoked by House Speaker Nancy Pelosi’s untimely trip and China’s robust military response leads to a collision between Chinese and American naval vessels or aircraft, even an “accident” could provide the spark that ignites a great fire. In June 1914, Archduke Franz Ferdinand was advised not to go to Sarajevo—as Speaker Pelosi was by the Pentagon before her visit. But no one imagined that during his visit he would be assassinated, providing the spark that ignited a conflagration so devastating that historians had to create an entirely new category: World War.

Fortunately, the American and Chinese governments know that a hot war would be a disaster for both. No serious person in either government wants war. Unfortunately, history offers many examples in which rivals whose leaders did not want war nonetheless found themselves forced to make fateful choices between accepting what they judged an unacceptable loss, on the one hand, and taking a step that increased the risks of war on the other. The classic case is World War I. After a terrorist with shady ties to the government of Serbia had assassinated his successor, the Emperor of Austria-Hungary judged that he had to forcefully punish Serbia. Since Austria was its single ally, Germany felt it had no option but to give it full backing. Russia felt obliged to support its Orthodox Christian brothers in Serbia. One step led to another in a vicious cycle of actions and reactions that had all of Europe at war within five weeks.

On the larger canvas of history, when a rapidly rising power seriously threatens to displace a major ruling power, the rivalry most often ends in war. The past 500 years have seen sixteen cases of such Thucydidean rivalries. Twelve resulted in war. In each case, the proximate causes of war included accidents, unforced errors, and unintended consequences of unavoidable choices in which one of the protagonists accepted increased risks hoping that another would back down. But beneath these were underlying structural drivers that Thucydides highlighted in explaining how the two leading city-states of classical Greece destroyed each other in the Peloponnesian War. As he wrote: “It was the rise of Athens and the fear that this instilled in Sparta that made war inevitable.”

Today, the United States and China are engaged in the GOAT rivalry—the greatest rivalry of all time. In this struggle, is war over Taiwan inevitable? The historical record suggests war is more likely than not. But as the past five decades show, it ain’t necessarily so. Fifty years ago in 1972, when Nixon and Kissinger opened relations with China, the differences between the United States and China over Taiwan were certainly irreconcilable. But statesmen demonstrated that irreconcilable did not mean unmanageable. They created a framework of strategic ambiguity that has provided five decades in which citizens on both sides of the straits have seen greater increases in their incomes, health, and well-being than in any equivalent period in their long histories.

The brute facts about the face-off between China and the United States over Taiwan today are three. First, not just Xi Jinping but the entire Chinese leadership and nation are unambiguously committed to preventing Taiwan from becoming an independent state. If forced to choose between accepting an independent Taiwan and a war that destroys Taiwan and much of China, Xi and his team will choose war.

Second, what Winston Churchill called the “deadly currents” in domestic politics are now running rife in both the United States and China. A fundamental axiom of American politics forbids letting a serious competitor get to one’s right on an issue of national security. Republican and Democratic politicians are thus rushing to show who can be tougher on China than the other. Presidential hopeful Mike Pompeo has called for the United States to recognize an independent Taiwan, and given the dynamics among Republicans, this will likely be a common plank in the Republican Party’s platform in the 2024 presidential campaign. In Taipei, Pelosi heralded the United States’ “solemn vow … to support the defense of Taiwan.” And this week, Sen. Bob Menendez, the Democratic chairman of the Foreign Relations Committee, and Sen. Lindsey Graham, a Republican leader on defense issues, introduced the Taiwan Policy Act, which would designate Taiwan a “major non-NATO ally” and commit $4.5 billion in military aid. Meanwhile, as Xi is arranging the political pieces for a precedent-breaking third term as general secretary and virtual emperor for life, the pressure for him to stand up to the United States and stand strong on Taiwan is more powerful than ever.

Third, while most American politicians have yet to recognize it, the military balance in the Taiwan Strait has been transformed in the quarter century since the last Taiwan crisis. The local balance of power has shifted decisively in China’s favor. As I explained in an article published here last year, the United States could lose a war over Taiwan. Indeed, as former Deputy Secretary of Defense Robert Work has stated publicly, in the Pentagon’s most realistic simulations and sensitive war games, in conflicts limited to Taiwan, the score is eighteen to zero, and the eighteen is not Team USA.

Were the United States to fight a local war over Taiwan, the president would likely face a fateful choice between losing and escalating to a wider war in which the United States would have the upper hand. Despite its huge leap forward in military capabilities, the United States continues to dominate the blue water seas on which China is dependent both for the import of energy and for exporting its products. Of course, that wider war could escalate further. And the upper rungs of this escalation ladder include the use of nuclear weapons.

In the nuclear domain, there is no question about the fact that the United States could erase China from the map. There is also no question about the fact that it could not do so without China retaliating with nuclear strikes that would kill most Americans. China now has a robust nuclear arsenal that creates a condition Cold Warriors called MAD: mutually assured destruction. In a nuclear war, neither the United States nor China could destroy the other without being destroyed itself. In that world, as President Ronald Reagan taught us, “a nuclear war cannot be won and must therefore never be fought.” But while no rational leader would choose to fight a nuclear war, the history of the Cold War includes a number of confrontations in which leaders chose to take increased risks of war rather than to accept the Soviet seizure of Berlin or the emplacement of nuclear-tipped missiles in Cuba.

If the best the current U.S. and Chinese governments can manage is statecraft as usual—which is what we’ve seen this past week—then we should expect history as usual. Tragically, history as usual would mean a catastrophic war that could destroy both.