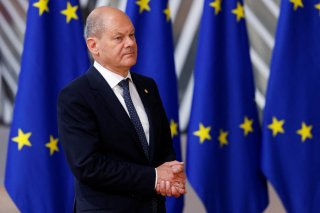 German chancellor Olaf Scholz recently published an essay in one of Germany’s leading newspapers calling on the European Union (EU) to unite and take on a new role as a “global actor” in the face of Russia’s advance. Such calls are not new but Scholz seems to misunderstand what being an actor requires and fails to see that the balance of power within Europe is shifting in a direction that threatens German strength.

Vladimir Putin, Scholz said, is a neo-imperialist and the “autocrats of the world are watching very carefully whether he is successful. In the 21st century, is it the law of the stronger or the strength of law that counts?”

Scholz, of course, wants to say that the strength of law is what counts, and thinks that the European Union can be a global actor that operates by following international law, issuing regulations, and setting a good example. But Russia’s invasion demonstrates a very different truth: sometimes, the law of the stronger matters. Russia failed to take Kyiv not because of international law or even European solidarity, but because Ukraine, with the support of the United States, United Kingdom, Poland, and much of Eastern Europe, blunted the Russian advance. In Ukraine, the stronger will win, and the rule of law does not matter very much.

Other European countries understand this lesson better than Germany. Notable among them are Sweden and Finland (who have abandoned their neutrality to join NATO), the United Kingdom (whose outgoing prime minister is more popular in Kyiv than London), and Poland.

In March, Poland committed to a plan that will raise defense spending to 3 percent of gross domestic product (GDP). In July, Jaroslaw Kaczynski, president of the ruling PiS party, promised to raise this to 5 percent over time. That expenditure will fund Poland’s plan to double the size of its armed forces to 300,000, with 250,000 active-duty troops. Poland plans to reach this goal in five years by introducing a new option of one-year military service. This will provide military training to many people who wouldn’t otherwise have it and recruit civilians who wouldn’t consider serving. Poland hopes that many will choose to stay on for longer. Poland is also purchasing over 250 U.S. Abrams tanks and it will be the only European Abrams operator. Warsaw is also purchasing F-35 fighter jets and possibly Apache attack helicopters. The initial F-35 order is small, consisting of only thirty-two aircraft, but fleet size will surely increase as defense expenditures continue to rise.

What does that mean? In fewer than ten years, except for Ukraine, Poland will have the largest standing army and modern armored force in Europe. And Poland’s military is already among Europe’s best.

Of course, the one army that will likely remain bigger is Russia’s. No one can predict the future, but a Russian victory appears highly unlikely at present. If Western support continues, Ukraine can hold the current line of contact and probably retake Kherson and parts of the Donbass region—all the more so because Russia, not Ukraine, faces more immediate manpower issues. Ukrainian defense minister Oleksii Reznikov has claimed that Ukraine could put up to a million citizens under arms. This is an exaggeration but only for lack of equipment and time more than a lack of willing volunteers. As the war continues, Ukraine’s armed forces will likely become stronger and better-armed, even as Russian combat power declines.

These nations are supported by a United Kingdom still trying to negotiate its post-Brexit role in Europe. Whatever role this eventually becomes, military power and the willingness to use it in support of allies are among the United Kingdom’s most valuable tools. London rushed to aid in Ukraine’s defense with a speed and intensity few nations matched. Boris Johnson was welcomed in Kyiv with a warmth European Commission president Ursula von der Leyen never quite received. In some ways, Brexit disadvantages the United Kingdom since it can’t work or vote with Eastern Europe in European institutions. But defense cooperation will surely continue to grow, and British defense spending will probably increase too so long as the Tories remain in power.

Cooperation will grow between the United Kingdom and Eastern Europe because both parties share mutual interests. But it will also grow because it’s helpful for the United States as it pivots toward China and it's the best way for London to exercise its leverage in Europe. It is a means of balancing against France and Germany, even internally dividing Europe, a return to the United Kingdom's traditional balancing role. Downing Street probably doesn’t strategize quite so explicitly, but a defense partnership with Eastern Europe—soon to be home to the continent’s two largest militaries—will have this effect.

But does military power still generate political influence in Europe, or does Scholz have the right understanding of power? Ukraine has no power to wield within European institutions. But even if it does eventually join the EU, and generally votes with Poland and other Eastern European states, this bloc will be insufficient for a qualified majority in the European Council, especially without the United Kingdom. Nor will the European Commission suddenly adopt a pro-Eastern view. Even if Poland and Ukraine put a million soldiers under arms, it may not translate into greater political advantages.

However, suppose that the security situation in eastern Europe deteriorates further. Russia might begin to win (in this case Poland will matter still more) or, if it is defeated on the battlefield, Russia could begin to collapse or disintegrate, suffering civil unrest, ethnic revolutions, and a crisis of succession reminiscent of 1917. At some point, French and German priorities on other issues will begin to appear irrelevant amidst a massive security crisis. If things get bad enough, protecting Europe’s energy security may even depend on a Russian defeat. European collective decision-making, including in the EU, will then prioritize the concerns of Eastern European states.

A disaggregation of institutional tools from military power may have other effects. For much of Europe’s post-war history, and especially during the period of increased integration between the signing of the Maastricht Treaty and Brexit, the nations that were the most politically influential within Europe also happened to have the largest and best-equipped militaries. Since the dissolution of the Soviet Union, however, France and Germany have had no reason to give much thought to relative military strength. But suppose that Germany’s eastern neighbor suddenly has a far larger military. Poland is not an enemy, but it is not really a friend either, especially at the European level, and the two nations share an acrimonious history. It would be disconcerting for France and Germany to realize that nations who hold a different vision of Europe’s future have more military power and are vital for defending Europe’s territorial integrity. Germany has not built up an intense concentration of military power since Soviet leader Mikhail Gorbachev withdrew Soviet troops from East Germany. A new military balance may lead to a new intra-European rivalry.

For example, Germany may decide to build up its own armed forces beyond its current limits to maintain parity with Poland. This could result in increased defense competition among the continental powers that lead to more disagreements within the EU. This is not the kind of path that leads to armed conflict but it doesn’t promote unity either. Military power is critical for a new kind of balance-of-power competition that outweighs integrationist impulses.

In his article, Scholz called for a common European defense and promised that Germany will offer “concrete plans” to this effect. A real European army might obviate the need for national buildups, though it might also become the object of national jealousies. But creating a European army is politically impossible and Scholz knows it, hence the lack of specifics. There is a fundamental tension between the Franco-German vision of power through regulation, law, and example, and the realities of hard force. The EU is an institution founded and designed for the use of the former.

The lesson European nations, especially those in the east, will take from this war is the enduring importance of military strength—not the need for European integration in defense or elsewhere. Of course, it’s true that Ukraine wants to join the EU and Brussels has opened accession negotiations with Albania and North Macedonia. But EU enlargement is not the same as deeper integration, and those countries will not necessarily strive for Scholz’s vision of a globally active EU. Instead, they will participate in intra-European rivalries and competition.

The war in Ukraine will not lead to a surge in European integration, a new geopolitical role for the EU, or the future Scholz foresees. It will more likely create a new kind of continental balance-of-power politics, with a renewed focus on military strength that allows the United Kingdom to play its customary balancing role. Scholz seeks a utopian future but he must instead confront the returning past.