The Iran Nuclear Agreement: Tehran "Achieved All It Wanted" 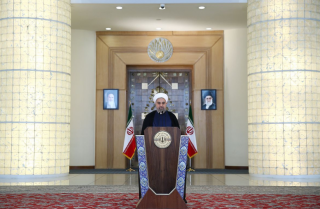 President Obama now has the deal he eagerly sought—so early, in fact, that he reportedly instructed his negotiators to bring home a deal no matter what. According to Mr. Obama, the so-called Joint Plan of Action (JPOA) “demonstrates that American diplomacy can bring about real and meaningful change—change that makes our country, and the world, safer and more secure.” Real and meaningful change will certainly be the result of this agreement. Unfortunately, the change will only be for the worse.

Iran has achieved all that it wanted. As the Iranian publication Mehr News Agency has pointed out:

– Iran will be recognized by the UN as a country with nuclear technology and entitled to rights of peaceful nuclear program including enrichment and full fuel cycle.

– All economic and financial sanctions against Iran will be removed through a new Security Council resolution.

– All nuclear facilities in Iran will retain their activities. Contrary to the initial demands of the other side, none of the nuclear sites will be shut down.

– Iran’s nuclear infrastructure will be preserved. No centrifuge will be [destroyed] and research and development on all advanced centrifuges including IR-4, IR-5, IR-6 and IR-8 will continue.

– Arak heavy water reactor will remain as such. Any demands to return the facility to a light water reactor have been dismissed. The facility will be modernized and enjoy new additions through cooperating with owners of most advanced and secure world technologies.

– Iran will enter global markets as a producer of nuclear products especially in the case of “enriched uranium” and “heavy water.” All sanctions and limitations against imports and exports of nuclear material will be annulled.

– All economic and financial sanctions in the fields of banking, oil, gas, petrochemicals, insurance, and transportation as imposed by the EU and the US under the pretext of Iran’s nuclear program will be immediately lifted upon the implementation of the agreement.

– Iran’s arms embargo will be lifted, replaced with some restrictions to be removed in 5 years.

– Billions of Iran’s blocked revenues in foreign banks will be unfrozen.

– A total of 800 individuals and legal entities, including the Central Bank of Iran (CBI), the Islamic Republic of Iran Shipping Lines and the National Iranian Oil Company (NIOC), will be released from any sanctions.

Virtually none of these outcomes was presaged when the United States first undertook to negotiate an agreement with Iran. Indeed, many of the elements now conceded to Tehran were considered to be “deal breakers.” Yet these have proved to be no more effective than the administration’s “red lines” regarding the Assad regime’s use of chemical weapons against the Syrian opposition.

It is noteworthy that while the Iranian side has greeted the agreement with nothing short of elation, only the president, the secretary of state, and their immediate circle of advisors have evinced a similar reaction. Indeed, Mr. Obama has compared himself to John Kennedy, who sought to reach an arms agreement with the Soviet Union, as if Iran, with no nuclear weapons, was somehow a nuclear superpower as the USSR was when JFK first reached out to Moscow. In reality, America, with its allies in tow, has made concession after concession to an economically starved state whose delusions of grandeur will now be greater than ever.

President Obama’s assurances notwithstanding, the Middle East (and indeed, the world) will now be far less stable. Iran will have little trouble cheating IAEA inspectors while it proceeds along its path of nuclear-weapons development. After five years, it will have complete freedom to acquire arms of all sorts. More ominously, Iran will now be flush with cash, with tens of billions of dollars accruing from both petroleum sales and the lifting of financial sanctions. No doubt Tehran will put that money to good use: increasing its support for Hezbollah, Hamas, Hafez Assad and the Houthi rebels; destabilizing Bahrain, Saudi Arabia’s eastern province; and extending its terrorist reach worldwide.

It remains to be seen whether the Congress can muster enough votes to override an inevitable presidential veto of any attempt to block the deal. In this regard, Prime Minister Benjamin Netanyahu, who opposed the deal, hardly helped his case at all. In seeking to muster support for Congressional opposition to any deal, he alienated a large number of Democrats by going behind the president’s back to address a joint session of the Congress. Now he needs those Democratic votes for an override, and he may not get them.

Should an override fail, and the agreement come into force, the larger Sunni Arab states can be expected to seek their own nuclear-weapons capability, as Saudi Arabia’s King Salman has already indicated would be the case if the P5+1 capitulated to Tehran. The Gulf States, as well as Egypt, Jordan and Morocco, will no doubt also request additional American military equipment, financed by aid or sold outright. Israel will follow suit, except that Jerusalem, despite its ability to deter Iran, may yet attack that country’s nuclear facilities purely out of desperation and frustration with American policy.

It did not have to be this way. The P5+1 could have continued to negotiate, while retaining the interim agreement signed in November 2013. Tehran would have had to face ongoing sanctions, which, even if China and Russia evaded them, would have continued to stress the Iranian economy. The West could have held out for a better deal, for the choice was never between war and peace, as the president kept asserting, or between a bad deal or no deal, as Israel’s prime minister insisted. Now the die has been cast; only the Congress stands in the way of a rollback of two decades of bipartisan efforts to contain the rogue state that to this day wishes to do harm to the country it continues to deride as “the Great Satan.”