The Only ISIS Strategy Left for America: Containment 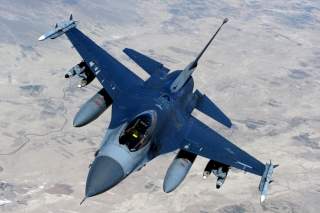 By now it should be clear to everyone that the current American policy for dealing with ISIS is failing badly. Numerous commentators have pointed out that administration evaluations of the situation on the ground seem to change with ever increasing frequency, yet retain a tone of optimism that seems increasingly divorced from reality. Just as the Bush administration held on too long to the fallacy that opposition to the American presence in Iraq was limited to what we're at the time termed "Former Regime Elements," so today the Obama administration seems to believe that ISIS is on the run thanks to American air power supplemented by an increasingly well-trained Iraqi army and Syrian rebel forces.

ISIS clearly is not on the run. It may have lost Tikrit in Iraq and Kobani in Syria, but its capture of Ramadi demonstrates that it continues to expand its control in western Iraq, while the fall of the strategic and historic city of Palmyra, and the seizure of  the al-Tanf crossing in Homs province, likewise point to the self-styled caliphate’s momentum in central Syria. These victories, especially Ramadi, have enabled ISIS to add to its stocks of higher grade military weapons. Moreover, with every triumph, and subsequent propaganda on the web, ISIS continues to attract recruits, both local and foreign.

And what of the Iraqi Army? Once again, it failed miserably. Once again, Iraqi troops turned tail and ran, leaving their weapons behind. The Iraqi army is no better, indeed is much less capable, than when it collapsed before Coalition forces 2003. Then, at least, the Iraqis could contend that they could do little against America’s land and air power, which constituted the world’s most powerful fighting force. Today, American air power is on their side; while ISIS hardly offers the same opposition as the American and allied coalition did over a decade ago. The Iraqis’ performance on the battlefield demonstrates just how little impact a dozen years of U.S. and allied training has had.

The Syrian opposition, notably its remaining moderate elements, have hardly fared better. With far less intense air support, and with the slow pace of Western weapons transfers and personnel training, it was only to be expected that ISIS would maintain the upper hand. To the extent that aid is flowing to the opposition, it continues to find its way to the more fundamentalist elements fighting Bashar Assad. This has been the case throughout the four-year civil war, which the administration had anticipated was to have ended years ago with the departure of Assad. He is still in Damascus, and the war goes on.

The Iranians are the clear beneficiaries of the turmoil that has gutted the cohesion of both Iraq and Syria. Baghdad’s desperate call for Shi’a militias to retake Ramadi once more inserts Iran into the heart of Sunni Iraq. In Syria, despite all the predictions that Assad’s forces are on the defensive, together with his battle-hardened Hezbollah allies, he continues to keep ISIS at bay and, unlike the Baghdad government, is taking cities from ISIS, not losing them.

Where does all this leave Washington? In the first place, its long-standing hope that ISIS could somehow be defeated without western, and particularly American, boots on the ground has been proved once and for all to be a quixotic pipedream. Because America will not dispatch the hundreds of thousands of troops required both to defeat ISIS and pacify Iraq and Syria, a conventional victory over ISIS is no longer conceivable.

Second, because it cannot defeat ISIS without its own troops on the ground, it will have to continue to rely on Iran and its Shi’a allies in both Iraq and Syria to confront the Islamic State’s forces in the field. The more Washington does so, however, the more intense its cooperation with Iran becomes, and the more eager it will be to reach a nuclear deal with the Ayatollahs, thereby in turn opening the door for a more vigorous partnership in the battle against ISIS.

Washington’s reluctance to be further embroiled in yet another Middle Eastern conflict is understandable. After thirteen years of fighting in the region, Americans still do not have a good grasp of the nature of the people they are fighting against, or, for that matter, those they are fighting for. The battles in Iraq and Syria reflect both religious and national rivalries that are age old and that Americans cannot sort out.

There have been other paroxysms of violent Islamic fundamentalism in the past, for example, the Almohads of 12th century North Africa and Spain, and the Mahdi of Sudan in the late 19th century, to name but two. The Almohads eventually became a spent force, while the Mahdi and his followers were vanquished by the British. Since there is little prospect that any western power will attempt to vanquish ISIS, it therefore falls to its regional antagonists to do the job, or wait until it implodes, as inevitably it will.

In the meantime, ISIS must instead be contained. Doing so will call for maintaining the current web of uneasy partnerships. These consist of Kurdish forces in northern Iraq and northeastern Syria, American and allied air power, and Shi’a militias supporting—actually bucking up—Baghdad’s official army. Containment will also require a seriously enhanced American and allied effort to arm the Kurds, train the Syrian rebels, and intensify the training of the hapless Iraqi Army.

Containment is a messy solution to an awful problem, however, there is none other in sight. The Obama administration, its strategy, if ever there was one, now in ruins, its credibility at an ebb, is left with no other choice.