Transforming the Marines for an Uncertain Future 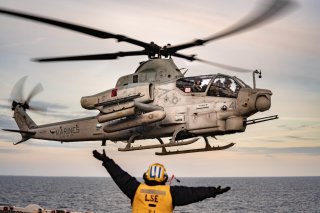 Whether described as transformations or revolutions in military affairs, from time-to-time armed forces must engage in periods of self-inspection. Spurred by changes in threats, advancements in technology, the realignment of national goals, fluctuations in resources, and guidance from their civilian masters, the services must reexamine their doctrines, organizations, and cultures to ensure they comport with the nation’s security needs and expectations. Having repaired the internal and external ravages of the Vietnam War, the U.S. Marine Corps came face-to-face with the need to transform itself in the latter part of the 1980s.

Dictionary definitions are cumbersome, but the clearest and most succinct definition of “transformation” is just three words: “this changes everything.” An important, relatively recent transformation of the Marine Corps has its roots in two events that occurred over the space of nine months. In October 1986, the Goldwater-Nichols Department of Defense Reorganization Act was signed into law, changing the way the Department of Defense was structured and permanently altering how the U.S. military would fight future wars. Among its provisions, the chairman of the Joint Chiefs of Staff was designated as the senior military advisor to the president, the role of the service chiefs was compressed to manning, training, and equipping the force, and a constellation of regionally and functionally oriented commanders was tasked to fight the force. This diffusion of power and authority was willingly accepted by some senior officers and resisted by a few.

Nine months later, in July 1987, Gen. Alfred Mason Gray was installed as the twenty-ninth commandant of the Marine Corps. Gray was among the senior leaders who embraced the tenets of Goldwater-Nichols. This tough-talking, tobacco-chewing New Jersey native’s gruff demeanor failed to disguise a razor-sharp intellect. He immediately set about the task of refocusing the Marine Corps on its traditional core competencies. Measures of merit for leaders changed dramatically, and while the Corps’ emphasis on physical fitness and a sharp personal appearance was undiminished, highly shined shoes and shaved heads took a back seat to the study of military history and critical thinking about the nature of war and the qualities needed by the men and women who would fight them.

The twenty-ninth commandant’s mantra was encapsulated in a pamphlet-sized publication, simply titled “Warfighting.” Sure, there were quips, but for the most part, they were good-natured. Warfighting? Isn’t that like “food eating” and “water drinking”? The response was direct and uncompromising. Eating and drinking are physical acts that sustain life, while warfighting is, first and foremost, an intellectual activity that often ends it. While Warfighting redefined the character of war, a companion concept, “Maneuver Warfare,” emerged as an offshoot of that epistle. Drawing on lessons learned from Genghis Khan, the German Blitzkrieg, and Israeli operations in the Middle East, maneuver warfare redefined how the Marine Corps would fight on future battlefields. Dismissing the last man standing tenants of the attrition models prevalent in the two world wars and previous conflicts, maneuver warfare was and is a philosophy that seeks to shatter the enemy’s cohesion through a variety of rapid, focused, and unexpected actions that create a turbulent, quickly deteriorating situation with which the enemy cannot cope. Reduced to its simplest terms, Marines would both outfight and outthink their adversaries. Under this concept, massed forces gave way to massed capabilities, an operational approach best executed by versatile combined arms teams. Accordingly, Gray retained and enhanced the Marine Air Ground Task Force (MAGTF) organizational model that had served the Corps well in multiple “climes and places.”

Emphasizing the virtues of maneuver warfare and the aggregate utility of MAGTFs, Gray vigorously supported the activities of the geographic combatant commanders carrying out their responsibilities defined under the Goldwater-Nichols act. His direction to MAGTF commanders was forceful and direct. They were enjoined to be the combatant commanders' “force of choice” for initial responses to unexpected, fast-breaking combat and non-combat contingencies. Active players rather than passive spectators, they were counseled not to wait to be asked to undertake these tasks. Rather they were directed to step up to the plate and offer their forces and capabilities along with rapidly conceived plans for their employment.

Attuned to and supportive of joint force concepts and doctrine, Marines were expected to study the capabilities and operational techniques of the other services and joint commands, with particular emphasis on those of the Special Operations Command created by the 1987 Nunn-Cohen Amendment. Under Joint Force Doctrine, forces from the respective services were expected to be complementary, not duplicative. In the case of the Marine Corps, this led some critics to assert that the nation did not require two land armies—a valid position, as the United States already had the best army in the world, a fact fully appreciated by Marines. Still, when the occasion demanded, it proved useful for the nation to have at its disposal a force capable of rapidly reconfiguring itself, with minimal augmentation, to perform many of the functions of a second army. The Gulf War, the last conflict in which the United States achieved all of its strategic objectives, serves as a case in point. President George H.W. Bush and Generals Colin Powell and Norman Schwarzkopf found it beneficial to have a force adept at operating with coalition partners and capable of breaching an extensive barrier system while mounting a frontal attack on Iraqi forces. The Marines played a key role in supporting the brilliant Army-led flanking main attack through Saudi Arabia that unhinged the Iraqi Republican Guards. Simultaneously, the presence of a Marine Expeditionary Brigade offshore on amphibious ships posed an additional threat to Iraq, requiring the diversion of four combat divisions.

Gray’s successor, Gen. Carl Mundy, inherited a vigorously debated and rigorously tested philosophy buttressed by an impressive array of operational concepts. Still, the Marines needed to codify the philosophy, harmonize with joint force concepts, processes, and procedures, and fully integrate expanded Marine Corps capabilities into the war and contingency plans of the geographic combatant commanders. Under Mundy’s precise and articulate leadership, this was accomplished. Possessing boundless energy and imagination and a keen appreciation for organizational design and management, it fell to the thirty-first commandant, Gen. Chuck Krulak, to develop and implement a systemic approach for the integration of concepts and doctrine, as well as requirements and programs that were flexible, affordable, and responsive to constantly shifting threats and national security priorities. Krulak’s answer to these challenges was the “Combat Development Process,” which, when conscientiously employed, still enables the Corps to remain abreast of these threats and challenges.

Simultaneously, Krulak foresaw the need to augment the training of new Marines to instill in them the self-confidence, appreciation for teamwork, and total commitment to mission demands required by maneuver warfare. He conceived a single event, the “Crucible,” to test Marines’ endurance, resolve, and ability to subordinate individual desires to unit goals. Only in this way could they complete the transition from civilian society to the lifestyle of Marines. With these tools at their disposal, five succeeding commandants continually rethought, refined, retrained, and re-equipped the Marine Corps to provide the nation with a versatile “middleweight” military organization, on the scene or deployable by multiple means, rapidly reconfigurable, and possessing the range of capabilities needed to carry out differing missions in varying environments, either independently or as part of a larger joint or international force.

Now, the Marine Corps has embarked on another transformation, one that is, in many ways, the antithesis of the former. While the previous transformation was largely intellectually based, the current one is primarily structurally oriented.

Based on guidance and direction issued through a transformational roadmap titled “Force Design 2030,” the range and depth of the Marine Corps’ capabilities are being significantly reduced. Deep cuts have been imposed on the infantry, cannon artillery, and tactical aviation components of MAGTF combined arms teams, while armor, bridging, and military police capabilities have been or will be eliminated outright. As a consequence, Marine Corps formations that have previously served as a “one-stop shop” for combatant commander responses to fast-breaking contingencies at the lower end of the conflict spectrum will now require external augmentation, resulting in extended timelines for planning and force deployment and employment. Moreover, the elimination and/or reduction of key capabilities will negate one of the cardinal virtues of the MAGTFs. As a functionally self-contained force, Marines arrived on scene fully integrated. Troops and equipment constituting the ground, aviation, logistics, and command and control elements had prepared for likely missions as a single entity, thus eliminating time-consuming requirements for arrival, assembly, and integration. In short, the “flash to bang time” between force movement and mission execution was essentially eliminated. Finally, the Corps’ unrelenting insistence on immediately responsive support of the combatant commanders has been tempered by the internal focus on the implementation of Force Design 2030.

In a strategic context, the tenets of warfighting and maneuver warfare recognize no geographic restrictions, nor do they establish priorities among potential adversaries. They provide substance to the phrase “any clime and place.” Under Force Design 2030, “Stand in Forces” and “Marine Littoral Regiments” that are clearly optimized for a future conflict with China will be or have been created. The wisdom of this approach is questionable. To paraphrase an insightful observation by former Secretary of Defense Robert Gates, “we have a perfect record when it comes to predicting future conflicts—we always get them wrong.” History supports Gates’ assertion. Former Marines and others with extensive operational experience have urged those involved in developing the forces of the future to optimize them not for a single possible adversary, but for the uncertainty that characterizes the twenty-first-century international security environment. That counsel has gone unheeded.