The Trump Brand Prevails at CPAC 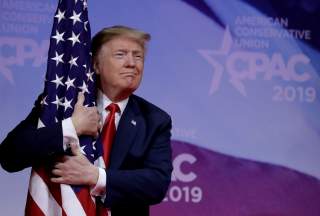 This past week, over nine thousand people traveled to National Harbor, Maryland, to attend the annual four-day Conservative Political Action Conference (CPAC). A kind of conservative Coachella, for years it’s been a meeting place for activists, students, political candidates, and rightwing thought leaders. “I think that the most important thing is to transmit to the world that the youth of America are not entranced by socialism, and then to have a full indictment and explanation as to why socialism doesn’t work,” Matt Schlapp, Chairman of the American Conservative Union and CPAC’s host, told the National Interest. “It’s unnerving to have one of the two major parties in America embrace the Green New Deal, embrace open borders, embrace post-birth abortion, these insane concepts. So, we’re spending a lot of time talking about them.”

Among the endless parade of suited-up college Republicans, girls in GOP elephant skirts, and attention-grabbing paraphernalia (one young man wore a white t-shirt with an image of Bill Clinton emblazoned with the word “RAPE”) came the fringe actors that give CPAC its special flavor. These included internet activist Jacob Wohl (banned from entering, he spent his days hanging out in the hotel lobby), professional provocateur Laura Loomer (who had her press pass revoked and was banned on the final day of the conference), and Canadian white nationalist Faith Goldy (denied a press pass, although vouchsafed entrance as a regular attendee). When asked by TNI, Goldy said she was getting an overwhelmingly positive response from other attendees, although she admitted she couldn’t know how much they were aware of her ethno-nationalist politics.

CPAC had only a single twenty-five-minute panel on immigration. Conservative author and commentator Michelle Malkin took issue with that, going overtime in her fire and brimstone speech. She was happy to call out those who she saw as betraying Republican promises on immigration, saying “I’m looking at you, Bush family,” and “yes, I’m looking at you, the ghost of John McCain.” She delivered this line with her finger pointed towards the heavens, surrounded by thunderous applause. This was practically the only mention of either the Bushes or McCain, who seem to have been extinguished from conservative history.

According to CPAC’s annual straw poll, 74 percent of attendees supported President Trump’s emergency declaration along the southern border in an attempt to grant him the authority needed to construct his long-promised wall. “I believe that it is within the National Emergencies Act for him to do it. I think the legal challenges are on weak grounds, although it will ultimately depend on which judges hear the case. If it goes to the United States Supreme Court, I’m confident the president will prevail. The National Emergencies Act is written in very broad terms,” former Kansas secretary of state Kris Kobach told TNI. Kobach, who lost a race for governor in November, is one of the country’s most hardline immigration advocates, and has received vocal support in the past by commentators like Ann Coulter.

What went unmentioned in the official halls of CPAC was the congressional bill that Trump signed alongside the emergency declaration, which brought hellfire down on him from his issue-driven base. “The immigration bill, or rather the funding bill if you want to call it that, has some real problems in it,” said Kobach. “The biggest problem is it creates a de facto amnesty for anyone who claims to be a member of a household of an unaccompanied minor. We’re talking about, potentially, well over a million people who would fall into that category. And ICE is prohibited from removing them from the United States. So, it’s a big, big poison pill that was stuck in that bill, unfortunately.”

Despite the lack of results and poor execution, Kobach did not think Trump’s 2020 odds were that daunting. “Absolutely, President Trump can be reelected,” he said. “I think it’s critical though that he make every effort possible to not only begin constructing the wall…there are more than 1,800 miles that are unsecured right now against pedestrian traffic, it’s going to be almost impossible to secure all of that. But he has got to show the American people that he’s doing every single thing he can to reinforce the rule of law and to build the wall. I think if the American people see that he is trying, and not only trying but trying really hard, then they will reelect him.”

Foreign policy discussion at CPAC received a lot more attention than immigration, with organizers attempting to find a working balance between Donald Trump’s pushes towards realism and the Republican establishment’s shibboleths about a permanent war footing. Often, it was the latter who was overrepresented.

The 2011 Libya intervention received brief mentions. Utah Senator Mike Lee, a firm constitutionalist, criticized Obama’s war in the North African country as illegal. And Lieutenant Colonel Oliver North of Iran-Contra fame and current president of the National Rifle Association, said that Hillary Clinton lied about the 2012 terrorist attack on Benghazi. The irony of North calling another person a liar was lost on both the speaker and the audience.

Sebastian Gorka has become a common sight at CPAC in recent years. The former deputy assistant to the president bestrode the halls of the conference, eager to be noticed and asked to be photographed by attendees. Refer to him as anything other than “Dr. Gorka” and you will be ignored or dressed down. When addressing the “conclave” (his word), the Hungarian-born Gorka set his sights on Russia. He said that Vladimir Putin had violated “a seventy-year taboo, international taboo, when he invaded the Ukraine and annexed the property, the territory of another nation for himself. Not since 1945…has that taboo been broken.”

Describing Russia as a destabilizing force in Syria, the Baltics, and in Asia, he slammed the Obama administration for not providing weapons to the Ukrainian government. This trepidation had existed due to Kiev’s use of neo-Nazi militias as their vanguard military force. Gorka boasted that Trump had provided these same white supremacists with “anti-tank missiles.” Economic sanctions enacted by the administration had “put Russia back in its box.” “America first, America always,” closed Gorka, although his brand of “America First” is very different than the president’s, who has continuously supported improved relations with Russia. This disagreement did not prevent Gorka from having an extended phone conversation with the president on Thursday after the Hanoi Summit, according to a source.

Sen. Lindsey Graham apologized that “Rocket Man” couldn’t be in attendance, “and if he doesn’t get a deal with Trump he won’t be anywhere much longer.” This threat to assassinate a foreign leader, and the consequences of such an action, received giddy assent. Graham said that Trump was able to start negotiations with the Taliban over leaving Afghanistan because “we’ve been kicking their ass.” He expressed a worry that Chinese students and professors were coming to the United States to steal the country’s intellectual property. Referencing a stunt by candidate Trump early in the 2016 primaries, Lindsey Graham said, “I gave him my phone number and he uses it.” Restrainers have worried previously about the South Carolina senator’s influence over the president’s ear.

The conference hosted a debate on U.S. policy in Syria between former Bush administration speechwriter Marc Thiessen and conservative radio personality Buck Sexton. When the moderator read President Trump’s tweet announcing a withdrawal from Syria, it received a smattering of applause. There was bigger applause when Thiessen blamed the rise of ISIS on Obama’s “precipitous withdrawal from Iraq,” which was outdone yet again when he praised the CIA agent who waterboarded Khalid Sheikh Mohammed. One man yelled out “hero!”

“ISIS is not defeated,” continued Thiessen, advising that “if we take the boots off their necks…they’ll come for us here at home.” Sexton said that if the United States didn’t leave now, it wouldn’t end up leaving for decades. Nor would Iran or any other foreign fighters be out of Syria any time soon. “The foreign policy echo chamber in DC never changes its mind about anything,” Sexton said. “It’s been decades already, we’re done.”

“We don’t get to decide when the war ends,” rejoined Thiessen. Sexton said that he doesn’t want permanent military deployment anywhere, and that under the theory Thiessen espoused we’d require “bases in Yemen, Syria…everywhere.” “We’re gonna have to do a lot of military deployments as long as the rest of us are alive” if that policy is followed, warned Sexton. “That’s true,” agreed Thiessen, who proceeded to positively compare American policy in Syria with arming the Contras in Central America. It’s “the Reagan Doctrine” applied to the Middle East, he assured the audience. Sexton referenced the 1983 withdrawal of American forces from Lebanon, saying “that’s another lesson of Reagan’s we shouldn’t forget.” Thiessen concluded by saying Reagan’s withdrawal from Lebanon helped lead to the 9/11 terrorist attacks.

CPAC included one other foreign policy panel, sparsely attended, this one including the president of the Center for Security Policy, Fred Fleitz; Sen. Joni Ernst of Iowa; and Congressman Roger Williams of Texas.