War of the Words: Inside the Donald Trump and Ann Coulter Feud 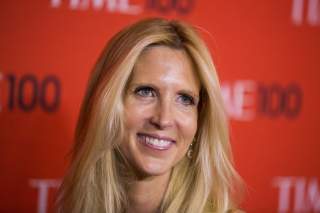 It’s rare that a conservative political infatuation begins and ends on HBO’s Real Time with Bill Maher. But Ann Coulter has been able to synchronize her support for Donald Trump to do just that.

In June 2015, just three days after Donald Trump rode down an escalator and changed the world, Bill Maher asked Ann Coulter which Republican candidate had the best chance of winning the general election. To which she responded, “Of the declared ones, right now, Donald Trump,” which was met by howling audience laughter and bug-eyed incredulity from her fellow panelists. The author of ¡Adios, America!, who had in years past become a single-issue voter laser-focused on immigration, was impressed by Trump’s demand for a wall along the U.S.-Mexico border and the end of all illegal (and perhaps some legal) immigration.

Now, less than three weeks ago on the same program, Coulter had a very different song to sing about the New York real estate developer turned president. The interview came on the same day as the end of the thirty-five-day government shutdown, the longest in U.S. history. The shutdown occurred due to an inability of the White House and Congress to agree on funding Trump’s long-promised wall. It ended with no additional funding.

“I promise you the country would be run much better if I had a veto over what Donald Trump [does],” Coulter told the liberal comedian. The media had been speculating that Coulter, through her Twitter account and public condemnations of the president when he deviated from preferred policies, was successfully manipulating Trump to back away from poor decisions. Coulter dismissed the claim.

During his February 15 announcement of a national emergency, Trump addressed the rumors himself, stating explicitly that he didn’t know Ann Coulter well, he hadn’t spoken to her in over a year, and he didn’t follow her work. While he liked her (primarily due to her prediction of his victory on Maher’s program), she was now  “off the reservation.”

With a divided Congress and a Democratic Party hostile to funding a barrier at all like the one Trump promised, it seems politically impossible that the president will be successful in his goals. But Coulter is having no excuses. “Crazy that I expect a president to keep the promise he made every day for eighteen months,” she said during the interview. Many immigration restrictionists are angry for the administration for in their minds wasting the first two years of his presidency. At the beginning of his term Trump ceded prioritization to the Republican congressional leadership, which eschewed his campaign themes of ending illegal immigration and funding infrastructure in favor of more traditional Republican preferences like tax cuts and health care. Now, after losing the House of Representatives in the midterm elections, Trump is unlikely to ever have the opportunity and flexibility he did in the beginning.

Coulter has become the face of the Trump supporters disappointed in the president’s performance. But she makes it clear that it’s not just her who is upset. “It’s the base, that’s what happens. The base is what has rebelled here, and they can take me as a stand in for the base, but that’s all I am, a member of the base.” Politically, this puts Trump in an unenviable position. Elected as a minority president, his favorable in polling have consistently hovered around 40 president. To have any chance at re-election, Trump needs to repeat his 2016 success by satisfying just enough voters (his base) in key electoral states. But some observers aren’t worried by the murmurings of rebellion.

“I don’t think it damages his re-election odds significantly as things now stand,” said Daniel McCarthy, editor of Modern Age. “In November 2020, Trump as an imperfect immigration restrictionist will face a Democrat who isn’t a restrictionist at all. Restrictionist voters will make their choice accordingly, and probably with a great sense of urgency.” Whether or not a “lesser of two evils” argument will be enough to convince the political activist fraction of the base or professional message promoters like Coulter remains in limbo.

There is, however, a tipping point for voters. “[M]arginal losses to Trump from disappointed restrictionists, noninterventionists, and other core supporters have the potential to add up. He’d be ill-advised to take his base for granted, even if he’s not in danger yet. Ann Coulter is an early-warning system,” said McCarthy.

To avoid another shut down, a new deal to fund the government has been announced and will be signed Friday afternoon. The deal allocates $1.375 billion for a “wall,” which it describes as “primary pedestrian fencing.” This amount is less than the $5 billion Trump was requesting in December, and much less than the estimated $25 billion total cost. Construction of this “wall” can only take place in very specific areas, and must go towards “steel bollard designs,” instead of concrete barriers.

With such anemic results, Ann Coulter may have departed the Trump Train for good. Will voters be far behind?