Trump-Kim Summit in Vietnam: End the Korean War with a Peace Declaration 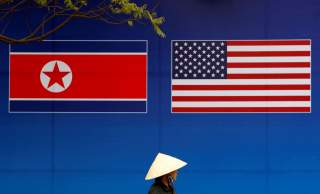 In our quest to convince North Korea to give up its nuclear weapons, Washington seems to have once again lost sight of one of the most important aspects of the seventy-year-old Korean challenge: the plight of South Korea and our collective security as allies.

There’s no shocker there. U.S. foreign policy is crafted—as are all nations—from our own national historical experience, tragic events and our identity that we project out upon the world. And since the early 1990s, Washington’s obsession with eliminating Pyongyang’s nuclear weapons first—a viewpoint I shared until last year—blinded it from almost alternatives to reduce the danger to Northeast Asia, the Korean Peninsula and the U.S. homeland from North Korea. Especially since the days of 2017, when ICBMs were tested and turned America into a potential North Korean nuclear target, all Washington cared about was ensuring its own security from atomic attack. It’s to be expected, sure, but such a singular focus also doesn’t consider other pathways to at least mitigate, if not eliminate, the nuclear threat posed by North Korea.

There might be no better example than the collective Washington yawn over the possibility that President Trump may sign a peace deceleration ending the Korean War—something clearly in both Washington’s and Seoul’s collective national interest. Scholars around the beltway decry such an action as a concession, appeasement and a complete waste of America’s time. Go on social media and say the words peace, North Korea and Trump in the same tweet and watch the hawks swoop in. I know this all too well.

That’s disturbing, but not surprising. When did not ending a war that technically has been going for over seven decades seem like a good idea? The last time I checked, I don’t see the Korean People’s Army battling Republic of Korea or U.S. forces along the demilitarized zone. And let’s thank God for that, as such a war fought with today’s modern weapons would likely mean a death sentence for millions of people.

Why is the overwhelming consensus here in Washington, D.C. among the so-called foreign policy elites so against a simple piece of paper that says a war that ended in 1953 is over, an act that would bring a sense of closure to millions of South Korean and American families still haunted by this seemingly forgotten conflict?

I have a one-word answer, and it’s not what you expect: vulnerability.

You see, as human beings, no one wants to be the first person to make a concession, show weakness or take a risk that could end up in utter failure—that’s where fear takes over. Take such an attitude and apply it to the hard knocks arena of international politics, and well, no one can ever show anything but strength and take any real risks, even if the risk might be small. Courage, as we can all see in our own domestic politics, seems in short supply these days.

Now is the time to think differently. It is time for America to show some foreign policy vulnerability and offer to sign a peace declaration to North Korea. It is time to take a small risk that could advance our interests and those of South Korea. Now is the time to be bold. We have tried carrots, sticks, so-called “strategic patience” and nothing has reduced tensions or the potential threat coming from Pyongyang. A peace declaration might just do that.

Therefore, it’s time to do what should have been done so long ago—and not to ask for any concessions, because such a declaration is the right thing to do. And, in fact, the upside could be huge. If America is going to have any hope in convincing North Korea to give up its nuclear weapons—which is America’s top priority for the summit—Washington needs to find a way to convince Pyongyang that it is serious about forging a new relationship and that decades of tension can finally end. There is only one way to do that: the signing of a peace declaration ending the Korean War once and for all.

If Washington was to sign with Pyongyang a simple political declaration ending the war, Kim may have the proof he needs to not only trust America’s intentions but to go back to his own people—especially the military of political elites—with evidence that America no longer has any hostile intent. Then he can begin denuclearization. That would be historic and is our only real chance at ending the endless ups and downs in U.S.-North Korea relations that nearly started a war back in 2017. For if we were to begin again a cycle of missile tests and nuclear threats, we have no guarantees that we will be as lucky as were last time. I, for one, think a conflict would be a real possibility.

There is no downside to this at all—except perhaps allowing pride or national ego to get in the way. Some will say America will be made a fool if North Korea still won’t give up its nuclear weapons or cheats on a future agreement after a peace declaration is signed. That’s just silly, and admitting reality only makes common sense and has no downside whatsoever. In fact, having such a declaration can only go to prove to Chairman Kim Jong-un that U.S. efforts toward détente are not only sincere, but backed by deeds and not just words.

If North Korea is willing, I say to President Trump it is time to make history. And let us never, ever, label the cause of advancing peace as weakness. History would never forgive us if such a label were to stick.

Harry J. Kazianis is Director of Korea Studies at the Center for the National Interest. You can follow him on Twitter: @Grecianformula.