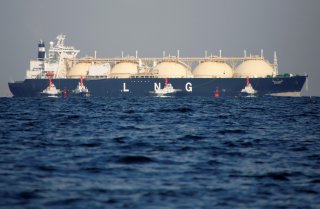 In a nationwide address today, Turkish President Recep Tayyip Erdoğan announced, “Turkey has discovered its biggest natural gas [reserve] in Turkish history in the Black Sea. Our drilling ship, Fatih, has found 320 billion cubic meters natural gas in our Tuna-1 area.” Speaking from the Fatih, Finance Minister Berat Albayrak, Erdoğan’s son-in-law, said the discovery marked a “new era” and that Turkey’s “current account deficit issue will be off the agenda thanks to the natural gas discovery.”

If Erdoğan and Albayrak are accurate, the gas discovery, while significant is not the game-changer they claim.

This is not to diminish Turkey’s find: It is possible Turkey will discover more natural gas in the Black Sea, and Erdoğan continues to violate Cypriot and Greek exclusive economic zones, which he says are based on “nonsense maps,” to search for gas.

Erdoğan and Albayrak are wrong, however, if they believe the gas find will be a panacea for Turkey’s economic woes. Turkey’s current account energy deficit was $34 billion in 2019, a 12 percent decline over the previous year. While they may hope that natural gas will fill that gap, the gas—most of which will not find its way to market any time soon—will not be a cure-all for Turkey’s economic woes.

Consider by comparison Egypt, a country with just ten million more people than Turkey. Egypt’s Zohr field, discovered in 2015 and developed by Italy’s ENI, currently has known reserves of approximately 850 billion cubic meters. While its exploitation has blunted some pressure on President Abdel Fattah el-Sisi’s regime to end subsidies, it has not resolved Egypt’s fundamentally dysfunctional economy. Simply put, for Egypt’s economy to thrive, it needs to build investor confidence, reduce corruption, and remove the influence of its generals in the market. Oil and gas income will never substitute for a fully transparent economy governed more by rule-of-law than connections and family ties.

For many countries and territories, hydrocarbons are more a curse than a blessing. In rentier states, an energy windfall leads governments to delay much-needed reforms. This has been the case with both Russia and Iraq. Oil and gas exports, for example, account for about 40 percent of Russia’s budget. Iraq is even higher: About 93 percent of its budget relies on oil exports. The energy market has always been volatile, and what goes up must come down.

Not every energy-rich country is like Norway or the United States which have successfully integrated energy into their economies without unnecessarily distorting them. Most states have far less capacity. In countries like Turkey which are plagued by opacity and poor rule-of-law, oil and gas resources can exacerbate corruption and undermine stability. This has been the case with East Timor, South Sudan, and Venezuela, none of which should be poor but all of which have been cursed by leaders which put family above country. Iraqi Kurdistan likewise seeks to present itself as a beacon of stability and security, but the noxious brew of corruption and family infighting could erupt into violence at any time.

Zaki Yamani, who served as Saudi Arabia’s oil minister from 1962 to 1986, a half century ago quipped, “The Stone Age did not end for lack of stone, and the Oil Age will end long before the world runs out of oil.” His words were prescient. As new technologies allow more countries to find and develop their own oil and gas resources or look elsewhere for their energy needs, the era of any particular country being able to reap windfall profits is over. Turkmenistan, South Sudan, Iraqi Kurdistan, Azerbaijan and other countries each believed that they would become center of the next black gold rush only to discover that corruption and their poor business climates repelled potential investors.

So too will it be with Turkey, where Erdoğan and Albayrak have allowed family concerns and politics to overshadow the business climate. They target companies deemed insufficiently loyal or unwilling to hire Erdoğan loyalists as ghost partners. Those who stand up for their contractual rights find themselves on the wrong end of politicized audits or criminal cases. This has led international banks and foreign firms to cut their losses and flee. Erdoğan and Albayrak’s opacity, corruption and, at least in Albayrak’s case, general incompetence. Rating agencies now rate Turkey’s sovereign credit firmly in junk bond territory. Turkey may believe it has the winning hand in extracting and marketing gas, but it may soon find that most international companies likely will not want to risk investing heavily in Turkey.

Erdoğan and Albayrak may see the Black Sea oil as a windfall and a means to enrich themselves. Patriotic Turks should instead demand Turkey to establish a sovereign wealth fund, monitored by technocrats from across the political spectrum, to ensure that Turkey’s gas wealth is both put to use for all Turks and can help shield Turkey from economic volatility. Norway’s Government Pension Fund Global today holds more than $1.1 trillion. The Abu Dhabi Investment Authority’s portfolio is worth almost $580 billion. Kuwait and Singapore are not far behind. Not by coincidence, each of these states weathered the current economic downturn better than most.

Erdoğan sees himself as among the greatest rulers Turkey and the Ottoman Empire have ever had. Too often, however, he prioritizes ego and wealth ahead of the country. How he manages offshore gas—if and when it is found in significant quantities—will determine whether his legacy is to transform Turkey into a United Arab Emirates or Norway, or to continue its descent into an East Timor, South Sudan, or Iraqi Kurdistan.