Under William J. Burns, the CIA Is Back 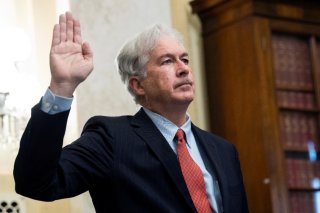 With William J. Burns as its director, the CIA is back.

Burns has earned the trust and support of both Democratic and Republican presidents over his thirty-two years in the U.S. foreign service. (President George W. Bush even handpicked him for a secret 2008 rendezvous with Iranian leaders). He was one of the youngest ever promoted to the rank of career ambassador, equivalent to a four-star general in the United States Armed Forces. His nomination by President Joseph R. Biden, to serve as CIA director, won unanimous consent by the U.S. Senate in March 2021.

Biden cited Burns' skillful handling of “the thorniest issues.” Biden was right, and Burns is proving to be one of his shrewdest appointments.

In his first year, Burns deployed his considerable skills—his long and hard-won expertise, his warm temperament, and his ability to listen—to restore intelligence and diplomatic cooperation with U.S. allies around the world. Personal diplomacy—managing the emotional states of heads of state and other decision-makers—had gone out of fashion at the CIA and the State Department. Fluent in both Russian and Arabic, Burns knew that the approach had paid dividends in the past. Direct contact with Jordan’s king, Congo’s emperor, and Libya’s dictator had produced diplomatic breakthroughs in past decades. It could work again, if it was tried. Burns did so.

Burns has also returned the CIA to its primary mission, collecting intelligence about America’s rivals, including its oldest global competitor, Russia.

All of this proved vital when Vladimir Putin’s tanks roared into Ukraine on February 24.

Burns is now facing down Putin, a former KGB officer. From his time in East Germany in the 1980s, Putin learned how to use proxy groups to carry out “deniable” attacks and how to manipulate Western ideals about self-determination, national identity, and human rights for his own benefit. Now Putin is using his same manipulative tool kit to bolt eastern Ukraine onto Russia.

Faced with such a capable adversary, Burns has rolled out a new weapon, which uniquely draws its strength from social media.

Traditionally, the CIA would quietly gather information, sharing it only with carefully cleared U.S. officials, so the target would never know that his secrets had been stolen. What if the CIA reversed all three of these things?

In what would have made covert traditionalists’ heads explode, Burns decided to start revealing what the agency knew. Under Burns, the agents of the shadows have chosen light as their weapon—and it proving to be devastating.

Starting with the first satellite photos of Russian troops massed along Ukraine's borders in April 2021, Burns and the Biden administration has chosen to reveal virtually everything it knows about Moscow's plans. The United States had never released so much information and analysis, in so much detail, so quickly and so consistently. With so much objective data presented to the public, the overwhelming majority came to see Russia as a potential aggressor in 2021. Antiwar movements did not take to the streets in Europe or America. And, over the course of that year, the public gradually came to support the Biden policy of deterring invasion by shipping weapons to Ukraine.

This open information policy unified Western public support for a beleaguered democracy that its giant neighbor sought to devour. Where the people led, the leaders followed. Funding for arms and military training for Ukraine has been repeatedly rushed through Congress with large, bipartisan majorities.

The vastness of these CIA revelations is unprecedented. Many European allies doubted this information up to the moment of the invasion. The head of the BND, the German secret service, was in Kyiv for meetings on the day of the Russian invasion. He had to leave by road.

At 5:40 a.m. on February 24, the world fully realized that the CIA was telling the truth.

The CIA’s word, considerably devalued because of previous failures (September 11, the war in Iraq, the Afghan file) has now been revalued. And the CIA’s verified warnings moved even the most reluctant European countries, including famously neutral Switzerland, to take a stand.

By sharing its secrets, the CIA united the world against the Russian invasion and made it harder for Putin to hide the truth of his vicious assault.

But Ukraine isn't the only crisis blinking red in the CIA’s cockpit. Other long-sleeping Cold War fronts are stirring back to life. The Strait of Formosa separates China from Taiwan with barely 100 miles of water. Soon China may cross that strait in force. China’s premier, Xi Jinping, who announced with Putin the boundless friendship between their two countries a few weeks before Russia’s invasion of Ukraine, shares with his ally a certain frankness about his intentions. He never ruled out the use of force to “reunite” the rebel island.

Facing the risk of a two-front war if China invaded Taiwan while Russia fights in Ukraine, Burns increased the CIA staff focusing on China, adding many Mandarin speakers to analyst ranks. Now, China knows that its aggressive moves toward the island democracy will be retailed to the world.

The Korean Peninsula is another flashpoint. North Korea multiplied the number of its ballistic and hypersonic missile tests since January. It even launched missiles that could strike Los Angeles or San Francisco.

Iran is also testing land and ship-based rockets, which could rain down on Israel or America’s Arab and European allies. Iran’s allies in Yemen, the Houthi Shiites, routinely launching rockets to murder and maim civilians in Saudi Arabia and the United Arab Emirates, key U.S. partners.

Add to that, the ongoing pandemic, the destabilizing rise in food and energy prices across the world, the threat to the supremacy of the U.S. dollar, and climate change. The CIA faces a hurricane of crises, ranging from the urgent to the important, from the now to the near-now.

Few predicted that the CIA’s constant release of intelligence would unite the world against Russia. Now it has. For China and the other threats, Burns may have a few other new cards up his sleeve.

Ahmed Charai is a Publisher of The Jerusalem Strategic Tribune. He is on the board of directors of many think tanks including the Atlantic Council, International Crisis Group, Center for Strategic and International Studies, Foreign Policy Research Institute, and Center for the National Interest.