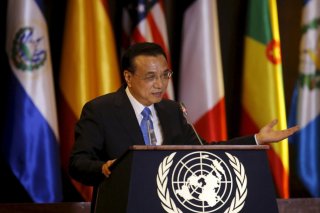 Argentine president Alberto Fernández was not in Beijing simply to take in the Winter Games, or just to lay a wreath at the memorial of Chairman Mao Zedong in Tiananmen Square. Instead, Fernández was on hand alongside Chinese leader Xi Jinping to announce that his country would officially be joining China’s Belt and Road Initiative (BRI).

Argentina would be just the latest Latin American country to join Xi’s pet project, a massive infrastructure and development scheme, joining the ranks of regional neighbors such as Chile, Bolivia, and Peru.

Ambitions haven’t ended there. Beijing is looking to further expand its economic ties with the region, recently making a push to enact a free trade agreement with the government of Uruguay, as well as exploring the possibility of reaching a new trade and debt agreement with Ecuador by year-end.

These developments are just the latest in a massive decades-long push to expand the country’s economic ties across the region, with China-Latin American trade growing from just $18 billion in 2002 to nearly $316 billion in 2019.

Beijing’s aspirations in the region aren’t just economic. Just this past December it was announced that Nicaragua would formally establish diplomatic ties with the People’s Republic of China and sever its relations with Taiwan. The move brought the number of countries that officially recognize the democratic island to just fourteen and sparked fears that neighboring Honduras could be next.

Though Latin America has typically filled a secondary role in U.S. foreign policy, expectations were high that the Biden administration could breathe new life into intra-American relations. As vice president, Biden served as the Obama administration’s chief emissary to the region, visiting a total of sixteen times. In contrast, President Biden has yet to visit the region, while Vice President Kamala Harris has visited just twice. Harris’ initial trip to Guatemala and Mexico was marred with controversy and centered largely on issues of migration and the border, while her more recent trip to attend the inauguration of Honduras’ President Xiomara Castro likewise focused heavily on regional development as a means to blunt immigration flows.

While the announcement that the United States would host the upcoming Summit of the Americas is a positive sign, it is unclear whether more concrete engagement will occur. The United States still lacks an ambassadorial presence in much of the region. While pending nominations to serve in key countries such as Brazil and Chile are in the works, many posts remain vacant with no clear timetable in sight.

China has been one area of bipartisan consensus. However, much of this focus has remained on bilateral confrontation or multilateral efforts across the Indo-Pacific. To its credit, the Biden administration has more successfully unified the United States and Europe in acting against Chinese activity, but focus on the issue closer to home remains sparse.

In its 2021 annual report, the U.S.-China Commission highlighted China’s expanding activity. The Chinese government has used party-to-party meetings to provide training and to build relationships with politicians across Latin America, tailoring its efforts with individual countries to convince them that partnering with China is the most effective means of ensuring continued growth and development.

While China’s demand for natural resources and agriculture has generated an economic boom, many of the region’s institutions are ill-equipped to fully respond to the growing environmental and social consequences. Forty-five Confucius Institutes are helping China develop its regional soft power as Beijing continues to sell financial and surveillance technology to regional authoritarian regimes, allowing them to further monitor and suppress their populations.

In recent years, far too many policymakers have seemed preoccupied with migration or confronting authoritarian regimes in Venezuela and Cuba. While these are certainly issues to address, they overlook the many other challenges that are plaguing the region, including the Covid-19 pandemic.

Though vaccination rates are increasing, Latin America has been among the hardest hit by Covid-19, and economies are struggling as a result. While much of Latin America experienced a positive V-shaped recovery in 2021, estimates for economic growth in 2022 are less optimistic, hovering just over 2 percent, in large part due to steeply rising inflation.

These developments have culminated in a surge of anti-incumbency sentiments, with left-of-center opposition parties securing victories across the region, including in Chile, Honduras, and Peru. Likewise, former President Luiz Inácio Lula da Silva is similarly leading polls against incumbent Jair Bolsonaro ahead of Brazil’s presidential election later this year.

Experts rightfully argue that the United States need not necessarily fear Latin America’s new Left, with much of its rhetoric geared towards issues such as climate, gender rights, and social services, rather than the ideological authoritarianism echoed in countries like Venezuela and Nicaragua. With that said, the United States can’t sit on the sidelines and watch.

Bringing Beijing’s ambitions to reality won’t come cheap, and China has long shown itself willing to step in and fill the void left open by Washington. U.S. intentions in the region are often viewed with apprehension, but inaction will do little to change hearts and minds, particularly as China continues its quest for expanding influence.

Steps to confront this challenge are being made. Just this week Senators Bob Menendez (D-NJ) and Marco Rubio (R-FL) introduced new legislation dubbed the “Western Hemisphere Security Strategy Act.” If enacted, the bill would require the Departments of Defense and State to establish new strategies for enhancing U.S. diplomatic and security engagements with the region.

On the note of diplomacy, the United States should also expand its actions under the 2019 TAIPEI Act. The scope of the law aims to increase engagement with Taiwan while encouraging stronger official and unofficial ties with third-party nations. This is particularly critical in Latin America, home to eight of the island’s remaining official partners. While the recent shift in rhetoric by Honduras’ Castro coupled with the attendance of Taiwanese vice president William Lai at the former’s inauguration is a positive sign mirroring the act’s goals, sustained action must be taken.

The United States can further help its cause by investing in critical infrastructure across the region. Building on the administration’s Build Back Better World (B3W) to compete with China’s BRI, the B3W can offer Latin American countries a wider array of options in economic development by emphasizing transparency and exposing potential corruption in BRI deals.

A listening tour to begin exploring possible B3W projects was conducted across three nations in the region late last year and should be followed by additional higher-level tours in 2022. Vice President Harris can additionally take a page out of Biden’s playbook, expanding her role as the nation’s Latin America envoy and generating greater media attention for the administration’s plan.

In 2000, the United States was the primary trade partner for all but one South American country. Much has changed in the two decades since, and Beijing has now eclipsed Washington’s place on top in all but three.

If the United States wants to get serious about competing with China and demonstrating itself as a global leader, it cannot continue to ignore its own backyard.

Joe Bauer is a recent graduate of the Johns Hopkins School of Advanced International Studies. He resides in Washington, DC.