Is Venezuela Willing to Start a Caribean War? 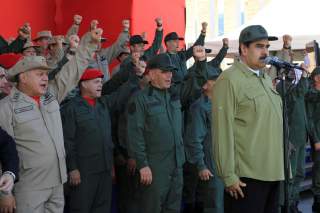 On December 22, 2018, the Bolivarian Navy of Venezuela “intercepted” the ExxonMobil research ship, the Ramform Tethys, in the exclusive economic zone and continental shelf of the Cooperative Republic of Guyana. The ship is flagged by the government of the Bahamas and was contracted to conduct seismic work by ExxonMobil and has a crew of seventy. Relations between Guyana and Venezuela have deteriorated considerably since Nicolas Maduro came into office in 2013, following the death of Hugo Chavez. This incident could be the beginning of a more sustained push by the authoritarian Maduro regime to stir up nationalism in the run-up to the beginning of a new presidential term in January 2019.

Guyana and Venezuela have a longstanding border dispute, dating back to the early nineteenth century but since settled by international arbitration. Venezuela has periodically challenged that settlement, claiming about half of the country. The recent discovery of large quantities of oil off the shore of Guyana conducted by major oil companies, in particular ExxonMobil, has led to a new oil rush for the Caribbean country. With a population of less than one million and an economy that has struggled in the past, the addition of oil is real boost to the economy, and if used prudently, could considerably improve the lives of most Guyanese.

The problem for Guyana is that the Venezuelan economy is sinking, and badly. According to the International Monetary Fund, inflation should reach ten million percent in 2019. The country is struggling to produce enough oil for exports, and food, toilet paper and other daily staples are hard to find. Crime is rampant, and the economy is now based on barter, with goods having greater value than the worthless government currency, the bolivar. Close to 2.5 million people have already fled Venezuela and more are expected to head across the borders to Brazil, Colombia and Ecuador as well as throughout the Caribbean. There is some talk that up to ten million Venezuelans may ultimately leave their country to escape economic collapse, a lack of personal safety and political repression.

The Guyanese government is deeply concerned that Venezuela could continue to push on the border issue. The government released a statement, saying that it “…rejects this illegal, aggressive and hostile act perpetrated by the Government of Bolivarian Republic of which once again demonstrates the real threat to Guyana’s economic development by its western neighbor; an act that violates the sovereignty and territorial integrity of our country.”

On paper, the Venezuelan military is much larger than Guyana’s. However, the terrain through which any large-scale Venezuelan incursion would proceed is challenging. Much of the border is jungle, and there are few roads as well as a number of rivers. Moreover, one has to wonder as to how combat effective the Venezuelan armed forces are at this stage, considering the country’s budget problems and the corruption within the officer corps. Would the Venezuelan military be ready and able to make war against Guyana? The answer is probably no; the preference would be more likely to conduct a number of bullying operations, such as the seizure of oil exploration ships.

Making the situation more complicated is the involvement of the major powers in the region. Both China and Russia have been and continue to be actively engaged in keeping the Maduro regime in power, although it is questionable that Beijing or Moscow would favor backing Caracas in a shooting war with Guyana. Moreover, the United States has made it clear that it considers Venezuela, in the words of national Security Adviser John Bolton, part of the “troika of tyranny,” alongside Cuba (which has security advisers in Venezuela) and Nicaragua.

Washington has little regard for the Maduro government and has suggested regime change would be a good thing. However, if Venezuela were to escalate the situation from the seizure of an oil exploration vessel to a land grab or an attempted naval blockade of the offshore oil fields, the situation could turn ugly. The United States has already let it be known that it disapproved of the Venezuelan action and stands behind Guyana.

The Guyanese-Venezuelan situation raises a number of questions. First and foremost is how far does the Maduro regime want to take this? Is this a major step that is meant to start a campaign of intimidation vis-à-vis its smaller neighbor? If so, what kind of role will China and Russia play in the unfolding drama? If one were cynical, the timing of Russia sending two long-range bombers to Venezuela earlier in December could be taken as part of a larger plan to support the Maduro regime as it pushes Guyana.

The oil industry is regarded in Guyana as a path to a better economic future. In the past the economy was built around sugar, bauxite and gold, but throughout much of the country's existence it was poorly managed. Over the past decade there has been more hope about future economic trajectories. This has come despite domestic political fighting at the ballot box. In December, the previous government fell and Guyana heads toward new elections in three months. Central to the election is how the projected oil money will be spent. Venezuela's action cast a dark shadow over this; something no doubt calculated in Caracas. Indeed, ExxonMobil has suspended operations.

The border dispute between Guyana and Venezuela has a long history. It reappears periodically with an incident. Considering the unpopularity of the Maduro regime, its need of military support and assistance from Cuban security personnel, a foreign policy distraction could be seen in Caracas as just the right thing to take people’s minds off the socioeconomic chaos and misery that their country has become under the socialist banner. Although the odds of an actual war are not likely, there is room for escalation, something that in the short term could help Maduro begin his new term (which he won through fraudulent elections). For Guyana, the incident could be an important test as to how much support it can rely upon from the United States, Europe and other Caribbean countries. The Caribbean has long been off the U.S. radar, but China’s and Russia’s growing role in the region means that can no longer be the case. Guyana could be a test case of U.S. resolve to maintaining its strategic dominance in the Caribbean.

Scott B. MacDonald is chief economist for Smith’s Research and Gradings. His views are his own.