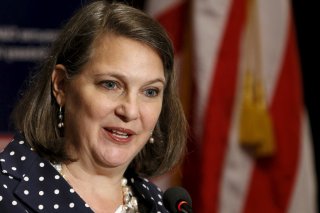 Nuland, a veteran diplomat who played an influential role in devising U.S. policy toward Russia during the Obama administration, was previously blocked by the Kremlin from entering Russia. Then, in October, Moscow agreed to lift targeted sanctions against Nuland; in exchange, U.S. authorities granted a visa to Konstantin Vorontsov, the acting deputy director of the Russian Foreign Ministry’s department for nonproliferation and arms control.

Nuland has long been regarded with disfavor by Moscow’s political establishment, which sees her as a prime mover behind the events of the 2014 Euromaidan Revolution in Ukraine, not to mention her perceived sway over the government of former Ukrainian president Petro Poroshenko. More recently, Nuland’s temerarious essay in the summer 2020 Foreign Affairs, “Pinning Down Putin,” was met with widespread consternation from Russian commentators and politicians. In it, she declared that the 2020 elections would give the United States the opportunity to “get off defense” and “seize the moment of renewal at home and stagnation in Russia to stretch out a hand again. …the Russian people should know that Washington and its allies are giving him [Putin] a choice.”

Why, given longstanding perceptions of hostility and bad faith, did the Kremlin vouchsafe Nuland a state visit with not one, but three top Russian officials? “It’s always a big privilege to have an opponent who embodies all that you subscribe to him,” Fyodor A. Lukyanov, editor-in-chief of the journal Russia in Global Affairs and chairman of the Presidium of the Council on Foreign and Defense Policy, told The National Interest. Nuland is a “person who really symbolizes everything Russia is accusing the United States of,” Lukyanov added.

Dmitry Suslov, deputy director at the Center for Comprehensive European and International Studies at the National Research University Higher School of Economics, Moscow, told The National Interest that the steps taken to accommodate Nuland’s visit are “fully congruent with the logic of manageable confrontation.” Suslov drew a parallel to the earlier Biden-Putin summit in Geneva, noting that the two men met face-to-face despite Biden’s “unpleasant words“ about Russia and Putin in order to mitigate the further escalation of U.S.-Russia tensions. According to sources familiar with the thinking of Kremlin officials, the meeting was spurred by the perception that Nuland is not just a prominent career diplomat, but also wields considerable influence within the White House. The Russian Foreign Ministry declined to comment on this story.

How successful were the talks? The two sides did not appear to make any headway in resolving the ongoing embassy staffing dispute. In addition, Ryabkov warned that “there is a risk of a further sharpening of tensions” and that Moscow does not rule out a complete freeze in the work of the two countries’ diplomatic missions. In the week leading up to Nuland’s trip, a bipartisan group of U.S. senators urged the Biden administration to expel as many as 300 Russian diplomats if Moscow does not issue more diplomatic visas to compensate for its policy prohibiting the U.S. embassy in Moscow from hiring local residents.

Suslov said that the current dispute over embassy staffing practices is simply the latest symptom of a larger crisis plaguing the bilateral diplomatic relationship. Moscow, according to Suslov, preconditions diplomatic normalization on the return of Russian properties seized during the Obama administration, a demand that the Biden administration is rejecting. By the same token, Suslov does not believe the Russian side will accommodate Washington’s demand to reverse its restrictions on the U.S. embassy’s staffing practices. “Fundamentally, I think the deadlock will continue,” he said. Lukyanov added that the current diplomatic crisis is a natural reflection of strained bilateral relations between Moscow and Russia. “The diplomatic relationship should correspond to the real relationship,” he said. “And that’s why I don’t believe we can expect any significant breakthroughs on [diplomatic] missions before we get some kind of breakthrough on all the rest.”

Kozak, who was appointed as the Kremlin’s top negotiator on Ukraine in 2020, struck a more optimistic tone. The senior Russian politician hailed what he described as a “thorough and constructive dialogue on conflict resolution in southeast Ukraine,” adding that “it was confirmed that the Minsk Agreements remain the only basis for resolving the conflict.” Kozak averred that Nuland “confirmed” what he characterized as the U.S. position taken by Joe Biden during the Geneva Summit: namely, that the territorial conflict on Ukraine’s eastern border cannot be resolved without granting an autonomous, “special status” to the breakaway Donbass region.”

The U.S. embassy tweeted Nuland’s upbeat summary: “We had a productive discussion with Dmitry Kozak about our shared interests, along with those of Ukraine, France, and Germany, in the full implementation of the Minsk Agreements and the restoration of peace, stability, and Ukrainian sovereignty in Donbas.”

Observers in Moscow have noticed that the Biden administration has adopted a surprisingly chastened approach toward Ukraine, stalling Kiev’s continued requests for a roadmap to NATO accession and brushing aside Volodymyr Zelensky’s efforts to enlist Washington’s help in revising the Minsk agreements. “Contrary to expectations, Biden is far colder vis-à-vis Ukraine than he could be,” said Lukyanov.

But Russian experts remain concerned that Washington and Moscow are still talking past one another on Donbass. “I largely agree," says Suslov, "with those Russian experts who claim that the U.S. is paying lip service to the Minsk agreements, because the implementation of the Minsk agreements would be a victory of Russia—a resolution of the Ukraine conflict on Russian terms, and would result in substantial limitations of Ukrainian foreign policy, and jeopardize the Ukrainian full-fledged pro-western orientation... thus, the Biden administration is not interested in the actual implementation of the Minsk agreements.” Nevertheless, Suslov maintains that the Biden administration cannot explicitly reject the Minsk format because doing so could breed “further escalation into a new full-fledged war in east Ukraine,” one that is potentially larger and more destructive than the bloody skirmishes of 2015.

Nuland’s sit-down with Ushakov is the haziest of her three meetings, with neither side publicly revealing any details from their discussion. Noting that Ushakov is one of those responsible for planning Putin’s summits, Suslov said that the two “very likely” discussed “further interactions on the presidential level between Russia and the United States.” Speculation has mounted that Nuland’s state visit was partly intended to lay the groundwork for a second potential Putin-Biden summit. But a second presidential summit would accomplish little, said Lukyanov. “I don’t see any agenda for this meeting. To have a sequel [to Geneva], we would need something completed from the first one… I don’t believe we can find any reasonable list of questions which Putin and Biden could discuss.”

White House Press Secretary Jen Psaki described the state visit as “constructive” and “productive,” echoing Nuland’s own characterizations of the trip. The Kremlin, too, struck a cautiously optimistic tone in its post-meeting assessment. “I cannot disclose everything, it was talks behind closed doors, after all,” said Russian Foreign Ministry spokeswoman Maria Zakharova. “The only thing I can say, probably, that there was some progress on some issues. Not a resolution of these issues, not an elimination of problems. But some elements of progress.”