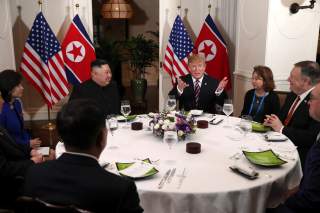 The dust continues to settle following the no-deal Hanoi summit between President Donald Trump and North Korean leader Kim Jong-un. In recent days, both Washington and Pyongyang seem to be hardening their position. At the same time, however, both the United States and North Korea have signaled their intent to continue to travel down the road of diplomacy. This suggests that negotiations to narrow down their differences and, potentially, a third summit between Trump and Kim resulting in an actual deal remain possible. The negotiation table, however, is different than it was before. Washington needs to take this into consideration.

To begin with, suggestions that sanctions can be beefed up seem fanciful at the moment. China, Russia and even South Korea have little incentive to support a new round of sanctions as long as negotiations continue. Even more, Beijing and Moscow have reportedly eased sanctions implementation in recent months.

On top of that, China and Russia have also been scoping business opportunities and signing economic cooperation agreements with North Korea. Seoul, meanwhile, is eager to restart inter-Korean economic cooperation. Right now none of them has any incentive to support more sanctions on Pyongyang—nor to support implementation of any bilateral sanctions Washington might impose.

In addition, Kim is de facto being recognized as a normal leader that the international community has to learn to live with. Pyongyang has never been as isolated as some would have thought. But the past year has witnessed a bout of diplomatic activity that suggests a more internationally engaged North Korea. Kim has held three summits with South Korean President Moon Jae-in, four meetings with Chinese president Xi Jinping and bilateral meetings with the leaders of Singapore and Vietnam.

On top of that, Russia has confirmed that a summit between Kim and President Vladimir Putin is being planned. Japanese prime minister Shinzo Abe wants to meet with him. While another meeting with Trump remains a priority for North Korea, Kim now has a diplomatic agenda of his own. The United States is not dealing with an isolated North Korea. At the very least, it has become a more active regional actor.

With a strike on North Korea being out of the question unless the United States wants to risk catastrophic retaliation and misguided hopes of regime collapse now a thing of the past, Washington needs to prepare for patient diplomacy if it wants to test whether full denuclearization is possible. Following from the Hanoi summit, it seems clear that a “grand bargain” is not acceptable to North Korea. In recent days, U.S. officials have suggested that complete denuclearization is a precondition for a permanent peace regime in the Korean Peninsula and North Korea’s integration in the global economy. In other words, the Trump administration wants to double down on the grand bargain approach.

Unfortunately for Washington, Pyongyang has little incentive to go down this route. This approach is similar to the “Libya model” or the “Iran model.” With regards to the former, Muammar Gaddafi ended up being killed by an opposition fighting his regime with support from the United States. As for the latter, Tehran complied with the agreement reached with Washington according to the International Atomic Energy Agency. But this did not stop the Trump administration from withdrawing from the deal last year. Kim therefore has clear recent examples of why a grand bargain does not end up well for Washington’s negotiation partners.

Instead, the Trump administration will have to engage in negotiations leading to incremental concessions from both Washington and Pyongyang. The good news is that this seemed to be the approach under discussion prior to the Hanoi summit. On the other hand, this will entail a change from the ‘leader diplomacy’ that has characterized U.S.-North Korea relations under Trump. The administration thus needs to be ready for a paradigm shift.

There are dangers for the United States under this new diplomatic scenario. Above all, Washington runs the risk of being blamed for any potential breakdown in talks with North Korea. Absent a new North Korean nuclear or ICBM test, Washington could easily be perceived as unreasonable if it does not agree to a workable agreement with Pyongyang. Leaving the negotiation table once can be seen as a show of strength. Doing it twice would start to appear unreasonable.

South Koreans, a large majority of whom still support engagement with North Korea and inter-Korean reconciliation, could well feel betrayed by their ally if it abandons negotiations absent a North Korean provocation. Meanwhile, China and Russia would conclude that the Trump administration is not serious about diplomacy with North Korea. Since recent rounds of UN Security Council sanctions have been portrayed as a means to bring North Korea to the negotiation table, their incentive to implement them would nosedive.

The relationship with South Korea is of particular concern. President Moon considers laying the ground for a peace regime in the Korean Peninsula as the main legacy he will leave to his successor once his non-renewable five-year mandate is over. Both Koreas have been engaging in confidence-building measures in recent months. Thus, there was disappointment in the Blue House and among the South Korean population when the Hanoi summit was abruptly cut short without a peace declaration. The alliance with the United States remains popular. But a bigger ally that does not consider the hopes of a smaller ally for reconciliation can slowly lose the latter’s heart.

On the other hand, the United States has a crucial advantage if and once negotiations resume. In short, Kim has staked his domestic popularity and continuation in power on the successful development of the North Korean economy. Nuclear weapons serve to prevent a U.S. strike, but they do not feed the North Korean population. Only integration in international trade and investment flows will allow Kim to realize his goal of having a prosperous North Korea. This explains why Pyongyang asked for the removal of the last five rounds of UN Security Council on Pyongyang. They directly affect North Korea’s economic prospects.

Indeed, whether sanctions have forced Kim into the negotiation table is open to discussion. It is also unclear what effect, if any, sanctions are having on the Pyongyang elite that Kim needs to keep happy for the sake of regime stability. But it cannot be denied that only sanctions removal can allow North Korea to have the economic growth that it would need to become a new Vietnam or China. At some point, Kim will have to take more meaningful steps towards denuclearization if he indeed wants a brighter economic future for his population.

The Trump administration therefore has a strong hand if and as it goes back to the negotiation table. Played correctly, the United States has a good change of moving North Korea towards taking significant steps towards denuclearization. After all, Kim himself is now on record stating that he is willing to denuclearize. This will not happen under the current, hostile state of relations between Washington and Pyongyang. But with a changed relationship built on trust and political and economic relations? Nobody knows for sure. Probably not Kim himself.

Ramon Pacheco Pardo is KF-VUB Korea Chair at the Institute for European Studies of Vrije Universiteit Brussel and Reader in International Relations at King’s College London.