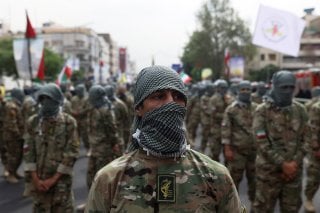 THE BIDEN administration is stumped by Iran. Upon inauguration, President Joe Biden and the best and the brightest of the Democratic Party assumed that reviving the Iran nuclear deal would be simple. In one of the ironic twists of history, they are bedeviled by their predecessor Donald Trump. It was the Trump administration that designated the Islamic Revolutionary Guard Corps (IRGC), the muscle behind the theocracy, as a foreign terrorist organization.

The State Department has designated the Islamic Republic a state sponsor of terrorism since 1984; no one serious in Washington doubts that the 2019 designation is factually correct. It is, however, politically inconvenient. Iran’s supreme leader, Ali Khamenei, apparently doesn’t care for the diplomatic legerdemain reportedly suggested by U.S. officials and European participants that would allow the White House and Khamenei to ignore this designation. The most embarrassing, if true, proposal would be for the United States to lift sanctions in exchange for a public promise by Tehran not to target Americans in the future. The Iranian foreign minister, Hossein Amir-Abdollahian, hardly a moderate, has suggested that the IRGC take one for the team since, in the end, it won’t really matter if the big sanctions on oil exports are lifted. So far, Khamenei has held firm, as has President Joe Biden.

Will either Biden or Khamenei blink over the Revolutionary Guards’ long embrace of subversive violence? Does it even really matter given the supreme leader’s fatigue with the West and larger aspirations? The difficulties and unseemliness of the Vienna talks ought to, again, oblige us to reflect on U.S.-Iranian relations, on why Republicans and Democrats have so often sought greater “normalcy” with the clerical regime—especially when it was dangerous and morally challenging to do so. Anyone who has examined the classified communications between Washington and Tehran can’t but be struck by the recurring pattern: the Americans are always trying to say “Hi!” (part of the unending search for “moderates”) while the Iranians answer “gom sho” (“get lost,” though often it’s much worse). The historically curious observer might also see a disconnect between Iran’s internal weaknesses and the determination of numerous administrations not to exploit them.

This actually is a truism in Iranian–American relations since 1979: ground is given to a theocracy that has killed, kidnapped, and wounded numerous Americans. This indulgence springs in part from the way Westerners see radicalism and revolution evolving. With the Islamic Republic, this has prompted many observers to ignore what the supreme leader and his men say and do in favor of a historical model that offers a smidgen of hope. Consider the French Revolution: first came revolution and overreach, as the Jacobins sought to transform society and expand frontiers; then came pragmatic temptations, as the burdens of governance led idealists to adjust expectations. The administrative state, in this rendering, eventually suffocates radicalism. The task of running a country, the thousands of interlocking processes that give a state identity and power—national and local budgets, urban planning, agriculture, industry, trade, building police forces and armies, the whole hierarchy of authority that obliges the young to bow before the middle-aged—militates against constant upheaval. Vladimir Lenin and his successors sought to tame the forces of history only to create a bloated bureaucratic state that lumbered toward its ultimate condition of labefaction. Mao Zedong was willing to sacrifice millions to perpetuate his version of communism, but his successors opted for a more workable economic model and cooled the internal tumult. Vietnamese “communists” are eager for Americans to invest in their country and reoccupy military bases. The imperatives of survival may not turn radicals into statesmen, but it does oblige them to be more careful with lethal creeds that can tear countries apart.

Most Iran-watchers in the West, especially in the academe, have been seeing the cusp of Thermidor since Ayatollah Ruhollah Khomeini died in 1989. Yet more than three decades later, Khomeini remains central to Iran’s politics. He is not just commemorated: his thoughts continue to guide the ruling elite. The Islamic Republic remains an unrepentant revolutionary state. The imposition of religious strictures on an unwilling society remains its core mission. Amr bimaruf, nahy az munkar—command good, forbid wrong—a central tenet of Islamic jurisprudence, remains radicalized and injected into every facet of Iranian society. Anti-Americanism and anti-Semitism define the theocracy’s internationalism, and Khomeini’s disciples have rebuffed reformers seeking to harmonize faith and freedom.

THE ISLAMIC Republic may be on an accelerated schedule for revolutionary decay, at least if compared to the USSR. Forty-three years in, the decay of militant Shiism is widespread and deep; within a similar span inside the Soviet Union, Nikita Khrushchev was gearing up to belittle John F. Kennedy in Vienna. Soviet Russia—the communist spirit amongst the people—seemed then, and also in retrospect, much more solid than the Islamist esprit does today within the Persian core of the Iranian state (among ethnic minorities, which account for around 50 percent of the population, it’s degraded further).

There is an operative assumption among Western foreign policy circles that the atrophying of militant faith in the Islamic Republic must have had a numbing, if not moderating, effect upon the ruling mullahs and Revolutionary Guards. To gain greater popular support, the supreme leader surely has brought in those who know that change is both inevitable and desirable. Nearly the opposite impulse in the theocracy has been true, however, in large part because the Shiite story is about a charismatic vanguard surviving in a hostile environment. Shiism makes no historical sense without an elite—first the imams, later the clergy—resisting more powerful forces trying to oblige believers to forsake their faith.

The Soviets had Karl Marx, Lenin, and Russian pride; the theocracy has nearly 1,400 years of history to summon (selectively) to its side. For the revolution’s dedicated cadre, the purpose of the state is to realize God’s will on earth. Khamenei and his followers see themselves as a vanguard whose authority cannot be infringed upon by popular will and elections. They are often explicitly contemptuous of democratic accountability, which they see as an occidental idea that denies divine agency. The theocracy isn’t, Khamenei has warned, “prepared to allow flawed and non-divine perspectives and ideas that are aimed at enhancing the power of the individuals to dictate its social and political lives.” Assured of their ideological verities, these men are morally indifferent to the loss of popularity—they are Allah’s servants reifying the imams’ teachings.

This nexus between God and man is extremely difficult for contemporary Westerners, in whom secularism now runs far deeper than Christianity, to understand. The Enlightenment, the World Wars, and Ludwig Wittgenstein have effectively severed Western certitude that God and man have a common language. When confronted with such ardent religion in an elite, the Western inclination is to assume that such religious men are somehow lying, deceiving others (if not themselves) about their capacity to see the Almighty’s intentions.

Additionally, Islamists emphasize praxis: Khamenei and his allies have ensured their political hegemony by dominating non-elected institutions. The Guardian Council, which is responsible for vetting candidates for public office, purges all unreliable elements. The judiciary shutters newspapers and imprisons activists on trumped-up charges. The 125,000-man Revolutionary Guards and their more numerous minions, the well-paid street thugs in the Basij, quell demonstrations. And where torture and imprisonment aren’t enough, Iran’s security organs routinely assassinate domestic and expatriate dissidents.

Despots falter when they fail to appreciate the ebbs and flows of their own society, when they cannot see the breaking points. For the past four decades, the theocratic regime has steadily shed constituents. The first to abandon the regime were liberals and secularists, who were part of the coalition that displaced the monarchy. In the 1990s, the universities became the hotbed of anti-regime agitation. The middle class turned decisively against the government in 2009 with the birth of the pro-democracy Green Movement. The proximate cause was the fraudulent reelection of President Mahmoud Ahmadinejad, but the shrinking economy had helped this critical segment of society to turn its back on the theocracy.

The mullahs gleefully dismissed them all. The students, perhaps the most crucial force in the Islamic Revolution, became scions of wealth infatuated with Western culture. In fact, most university students today are from the downside of the middle class. The ruling elite thus now sees the middle class as hopelessly unsteady if not Janus-faced—they too have forgotten that God’s cause requires sacrifice. The regime put its remaining faith where it has always invested most of its rhetoric: the lower classes, the mostazafan, the oppressed, in whose name the revolution had been waged. Tied to the regime by patronage and piety, they became the indispensable pillar—until it, too, cracked in 2017.

That year was the beginning of the poor people’s protest movement. Corruption and American sanctions caused the government to trim the welfare state. At a time when the mullahs no longer hide their affluence and privileges, preaching austerity was galling to those subsisting in Iran’s shanty towns. “They make a man into a God and a nation into beggars,” cried out a protester in 2017. “Death to Khamenei!” was a common chant then in nationwide protests, and again in 2019, when an even larger wave of demonstrations—those in the ethnic minority provinces moving toward insurrection—struck the country. The theocracy unleashed its enforcers with exceptional severity in 2019. Thus far, the regime’s security forces have held.