Is War Inevitable if Talks With Russia Fail? 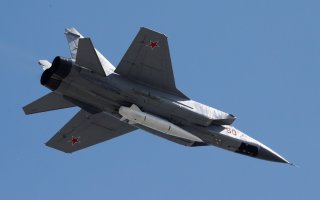 Russia and the West have emerged from three rounds of unprecedented security talks, but officials on both sides say little progress was made.

The week kicked off with a January 10 meeting between Moscow and Washington in Geneva. The two delegations, led by U.S. deputy secretary of state Wendy Sherman and Russian deputy foreign minister Sergei Ryabkov, locked horns over Ukraine and the future of the North Atlantic Treaty Organization (NATO). Sherman rejected Russia’s demands for formal assurances that Ukraine and Georgia will never join NATO as “simply non-starters,” adding that Washington “will not allow anyone to slam closed NATO’s open-door policy.” The U.S. side did, however, signal its willingness to discuss limitations on Western missile systems and military exercises in and around Ukraine. But Ryabkov reiterated his earlier position that Russia’s list of demands vis-à-vis the United States and NATO, published in December, is not a “restaurant menu” and must be either accepted or rejected in its totality. Ryabkov again dismissed the idea of a lesser settlement on Monday, insisting that it is “absolutely mandatory” for Russia to “make sure that Ukraine never, never, ever, became a member of NATO.” A Wednesday meeting between Russia and NATO appeared to tread on similar ground, with NATO chief Jens Stoltenberg offering future talks on arms control whilst rejecting Russia’s demand for binding legal guarantees against the alliance’s further eastward expansion. A third round of talks commenced between NATO and the Organization for Security and Cooperation in Europe (OSCE) in Vienna on Thursday. Kremlin officials described the OSCE meeting as largely a sideshow. “I want to be clear: we did not initiate this discussion in the OSCE,” said Russian foreign minister Sergei Lavrov in an interview on Friday. “...the main format is Russia and the United States, and, to a lesser extent, Russia and NATO.”

“The heavy pace of bilateral and multilateral engagements this week demonstrates that the United States and our allies and partners are not dragging our feet. It is Russia that has to make a stark choice: de-escalation and diplomacy or confrontation and consequences,” Sherman said. The Russian side has not committed to subsequent talks, with Ryabkov suggesting that “Washington and Moscow had reached a dead-end or a difference in approaches” over the issue of NATO expansion. This week’s negotiations were held against the backdrop of mounting military tensions between Russia and Ukraine. Western intelligence sources and military experts have expressed alarm over the alleged buildup and out-of-cycle movements of Russian troops along the Russian-Ukrainian border. “Moscow is so positioned that they can move with very little warning,” John Herbst, a former U.S. ambassador to Ukraine and senior director of the Atlantic Council’s Eurasia Center, previously told NBC News. “They’re certainly threatening. And they’re in a position that if they want to, they can do it.” Kremlin officials continue to insist that Russia has no plans to attack Ukraine, adding that Russia has a non-negotiable right to deploy and transfer troops within its borders as it sees fit. “I wish to believe him, I wish that it is true that they have no plans, but everything we’ve seen so far indicate that they are making motions in that direction,” said Linda Thomas-Greenfield, the U.S. ambassador to the United Nations.

The White House suggested on Friday that Moscow could be plotting a false flag operation in eastern Ukraine as a pretext for invading all or part of the country. “Russia is laying the groundwork to have the option of fabricating a pretext for invasion, including through sabotage activities and information operations, by accusing Ukraine of preparing an imminent attack against Russian forces in eastern Ukraine,” according to an email sent by an anonymous U.S. official. The official added that the Russian operatives “are trained in urban warfare and in using explosives to carry out acts of sabotage against Russia’s own proxy forces.” Pentagon spokesman John Kirby called the assessment “very credible” when asked about it during a briefing on Friday. Kremlin spokesman Dimitry Peskov described the allegations, which were reported by CNN, as “unfounded.”

While denying any offensive intent regarding Ukraine, Moscow says it intends to respond forcefully if the West rejects its security demands. Russian president Vladimir Putin warned in an earlier phone conversation with President Joe Biden that the imposition of any further U.S. sanctions on Russia could lead to a complete rupture in bilateral relations. Ryabkov said, without committing to any specific actions, that the Kremlin is reviewing a wide range of military options in case the talks fail. The senior Russian diplomat told the TV network RTVI that he cannot rule out the deployment of Russian military assets in Cuba or Venezuela. When asked about Ryabkov’s comments, National Security Advisor Jake Sullivan said he was “not going to respond to bluster in the public commentary.” Russian politicians and commentators previously suggested that the Kremlin may also explore the possibility of deploying tactical and strategic weapons systems in Belarus and Serbia.

Top Russian officials have averred over the course of negotiations that the Kremlin will not tolerate the status quo regarding NATO’s presence in eastern Europe. “Russia is a peace-loving country. But we do not need peace at any cost,” Moscow’s OSCE representative Alexander Lukashevich said on Thursday. “If we don’t hear constructive response to our proposals within a reasonable timeframe and aggressive behavior towards [Russia] continues, we’ll have to take necessary measures to ensure strategic balance and eliminate unacceptable threats to our national security,” he added. Russian deputy foreign minister Alexander Grushko said in December that the West can “take seriously what we have put on the table or face a military-technical alternative.” Lavrov told reporters on Friday that “military-technical measures imply the deployment of military hardware, it is obvious.”

Polish foreign minister Zbigniew Rau announced in the aftermath of the talks that “the risk of war in the OSCE area is now greater than ever before in the last 30 years.” The White House has ruled out putting U.S. boots on the ground in the event of a Ukraine invasion scenario, but says it is ready to respond to prospective Russian “aggression” with a major sanctions package, expanded military aid to Kiev, and changes to NATO’s force posture on the alliance’s eastern flank. “We’re prepared to continue with diplomacy to advance security and stability in the Euro-Atlantic,” said Sullivan. “We’re equally prepared if Russia chooses a different path.”