The War to Reshape European Security Has Begun 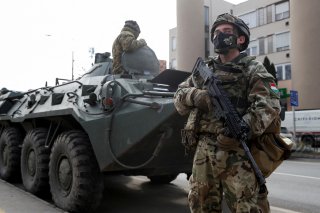 War in Ukraine means many things, but one undeniable consequence stands out: the security architecture of Europe, fashioned largely by the West in the three decades since the implosion of the Soviet Union, has failed. Even as the bombs fly over Kiev, the Biden administration, like all actors on the European stage, must begin to reimagine a new, different, and more stable system for multilateral security throughout the continent.

For a start it is necessary to understand that, however critical one is of Vladimir Putin’s declaration of war, the institutions and mechanisms championed to enhance security throughout the European continent—notably the Intermediate-Range Nuclear Forces (INF) Treaty, the Organization for Security and Cooperation in Europe (OSCE) architecture, and the NATO alliance—and the use of economic sanctions as an effective instrument to compel a change in Russia’s policy choices—have proved ill-suited to accommodate core Russian security interests as understood in Moscow. In recent months, the best efforts of Washington, Paris, Beijing, and New York were not enough to engage Russia in a successful effort to accommodate or redefine Russia’s fundamental red lines in Ukraine.

Perhaps such efforts were doomed from the start. Indeed, it may have been the case that Putin’s self-declared red lines—notably the withdrawal of NATO forces from territories formerly commanded by the Soviet Union during the Cold War and Ukraine’s exclusion from NATO expansion to the east—were impossible to modify in such a way as to meet Washington and Moscow’s fundamental interests.

But whether this is the case or not is no longer the point. In the new world now dawning, Putin has gone to war to force the West to acknowledge that it will simply not be possible to build a structure for European security on the assumption that Moscow will peacefully accommodate NATO’s untrammeled expansion to the east.

It is now clear that Russia’s acquiescence in this effort in the wake of the collapse of the Soviet Union was a historical anomaly. Indeed, Putin’s rise is a consequence of the shortcomings of the security assumptions driving U.S. and NATO policy in the aftermath of the USSR’s collapse.

However seductive the parallels, Russia today is not Nazi Germany, and Ukraine in 2022 is not the Ruhr Valley or Czechoslovakia or Poland in 1939. In fact, if the veracity of this charge was truly believed, the United States and its allies would have no choice but to go to war today against Russia. That this potentially literally nuclear option is not being seriously considered in Washington or in NATO capitals reflects this more sober assessment.

So, if Putin, for all his faults, is not Adolf Hitler and his invasion of Ukraine is not Pearl Harbor, neither a battle between NATO and Russia for Ukraine nor total war against Moscow is on the table. And indeed, that is manifestly the case. President Joe Biden, from the onset of this crisis has made clear that guaranteeing the independence of Ukraine is not within NATO’s remit. Yet Putin has just unleashed a war on NATO’s doorstep, raising for the first time since the Cuban Missile Crisis the real prospect of a shooting war—by design or miscalculation—between NATO and Moscow.

NATO is not “brain dead,” as French president Emmanuel Macron suggested some months ago. The war in Ukraine has given it a shot of adrenaline. But it is also the case that the West’s answer to mutual and indivisible security in the postwar era has failed to protect the peace in Europe.

Will tomorrow’s security architecture feature NATO’s acquiescence in Russia’s fait accompli that is now beginning to emerge on its eastern frontier? Can credible assurances be constructed to reduce Russia’s demands for NATO’s withdrawal from much of what was formerly Eastern Europe? Is it possible to build tomorrow’s peace in Europe on a demilitarized Ukraine and a series of separation of forces agreements similar those fashioned between Israel and Syria and Egypt in the aftermath of the October 1973 War? Short of the absolute defeat of the Russian invasion of Ukraine and the establishment of a peace dictated by the West, resolving these questions will be at the heart of negotiations about Europe’s future.

Geoffrey Aronson is an adjunct fellow at the Middle East Institute in Washington, DC, and a former security advisor to the EU.