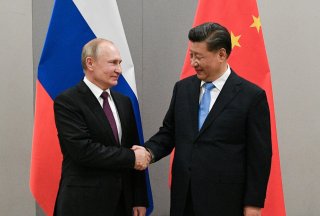 Today’s global power structure can be described as modified bipolarity. Despite rising spending across NATO, the United States will continue to be the bulwark of Western military power, including nuclear deterrence. Despite its many vulnerabilities, China's power relative to the United States is undeniably rising. In the theoretical conceptualization of bipolarity, a single non-superpower cannot significantly change the global balance of power in favor of one pole. Russia holds a special status given that it is a nuclear peer coupled with vast resource wealth, relatively formidable conventional capabilities, and influence in its region and the Global South. Russia is not a superpower but it can sway the balance towards either pole. Kenneth Waltz’s balance of power realism suggests that weaker powers tend to cooperate together to “balance” against the stronger power. In Stephen Walt’s “balance of threat” variant, states are expected to balance against not necessarily the most powerful, but the most threatening state. In today’s system of modified bipolarity, who will Russia join with and balance against? All things held equal, in the “great game” of global power competition, the United States should want Russia on its side, rather than China’s. However, U.S. and Western policy towards Russia threatens to create the opposite result.

China is ascendant and its power is growing faster relative to that of the United States. At present, only China has the ability to compete with the United States diplomatically, informationally, militarily, and economically. China and Russia are both revisionist powers with forms of government and territorial ambitions that cause them to feel maligned by the current U.S.-dominated global order. As Brookings Institution nonresident senior fellow Angela Stent explained, China and Russia “share a commitment to creating a ‘post-West’ global order which takes their interests into account and is conducive to authoritarian rule.”

Power transition theory suggests that as a potential new superpower rises, it starts to chafe under the existing order and seek its “place in the sun.” As China rises, it will likely seek to revise the global order currently underwritten by U.S. hard and soft power, with the U.S. dollar as the global reserve currency. The current world order prioritizes values and norms, including national sovereignty and freedom of navigation and commerce. China would like to revise this order to fit its authoritarian image, with the ability to dominate its neighbors with impunity and settle disputes through coercion and, if necessary, force. Similarly, Russia shares China’s authoritarian political system and its desire to revise its territory and influence by force and coercion. This makes them natural partners with the shared goal of degrading and eventually overthrowing the U.S.-dominated global order. However, China also poses a threat to Russia and they have a history of territorial disputes and suspicion toward one another. A shrewd U.S. foreign policy would seek to exploit these differences. Currently, it is doing the opposite.

The United States, United Kingdom, and much of the West are publicly pushing for Ukraine’s maximalist vision of victory over Russia which requires the expulsion of all Russian forces from all Ukrainian territory, including territory either contested or controlled by Russia since 2014. This policy will likely entail years of continued bloodshed, destruction, Western financial and military support, and the risk of escalation. It also harms competition with China in two key ways. First, it focuses U.S. spending and attention on Europe and leaves the West with fewer resources to use in the Indo-Pacific. Second, attempts to economically and politically isolate Russia will drive it into closer economic and military partnership with China, threatening to create an authoritarian bloc in command of vast resources, manpower, and military arsenals. The emergence of a global power structure featuring a united China and Russia against the United States is both undesirable and unnecessary.

There are three possible triangular configurations for the global balance of power going forward. First, Russia could remain non-aligned, which has largely been the dynamic since the end of the Cold War. Second, as the United States and its democratic allies isolate Russia, they could drive Russia and China together as these autocracies seek to create an alternative order consisting of those left out of the West’s “good democratic actors” club. Russian foreign minister Sergei Lavrov alluded to this, saying that a new “iron curtain” is descending between Russia and the West. Finally, the United States could convince Russia that despite its similar authoritarian model, China poses a greater threat to its interests and sovereignty. The United States could also offer to cooperate with Russian on economic and technological development and shared security concerns if a coherent and mutually acceptable order can be established in Europe. Moscow has expressed openness to “dialogue on strategic stability and nuclear non-proliferation” despite the ongoing conflict in Ukraine. Greater cooperation between the United States and Russia is the optimal configuration of power for containing a rising China, especially since it would allow the United States to complete its “pivot to Asia,” a goal that the Obama administration espoused as a top U.S. national security priority over a decade ago. But the window to complete the pivot might have already closed or at least is closing rapidly.

While the current mood makes this third outcome seem unlikely, history provides parallels that suggest the possibility and utility of pursuing interest-based partnerships, and warn of the risks of foregoing them. For instance, Great Britain and France—both democracies—were understandably opposed to partnering with the authoritarian and aggressively communist Soviet Union in the run-up to World War II. This helped to drive the fearful Soviet Union into an alliance of convenience with Germany—a fellow autocracy—as it desperately sought extra time to prepare for the inevitable war. Conversely, U.S. policy under President Richard Nixon sought to balance China against the Soviet Union to successfully reduce the power of the communist bloc by making overtures to communist China.

A realist approach that considers both power and resolve would have advocated for Ukrainian and NATO concessions to renegotiate the European security order, which still assumes an outdated posture of complete asymmetric Western superiority over Russia that existed at the end of the Cold War. The current war in Ukraine does not take this possibility off the table. Rather, it serves as a useful demonstration of Russian capabilities that were largely misjudged. Arguably, had Russia’s military capabilities been known, the war might have never broken out. War also might have been averted through robust diplomacy as the crisis escalated. Unfortunately, however, this never materialized.

The conflict in Ukraine has unfolded in ways that are advantageous and disadvantageous for the West and Ukraine vis-a-vis Russia. The war has exposed Russia's military weaknesses, enhanced NATO's cohesion, and showed that Ukraine is willing and able to fight. However, Russia has also made operational gains, including nearly cutting Ukraine off from the sea, capturing vast swaths of its industrial regions, and crushing its economy, that it can use later as bargaining chips. Ukraine has made a far better showing than expected but it is still unlikely that it can retake lost territory. Absent a robust ceasefire or peace agreement, the war will continue to be a bloody and unstable stalemate. As Ukrainian casualties and economic devastation continue to mount and reverberate globally, such as by exacerbating food and energy shortages, at some point the West will have to choose between continuing to push for a maximalist Ukrainian victory or convince Ukraine to accept limited goals and facilitate a negotiated settlement.

A settlement over Ukraine should strengthen NATO but it should also seek to accommodate Russian interests, as unappetizing as this may sound, and reengage with Russia through trade and diplomacy. The West can explain to Russia that its heightened military posture is a result of the war it launched in Ukraine but that this posture could be reduced to pre-war numbers if Russia takes steps to rebuild mutual trust. The end goal should be to achieve a stable European security order. The United States could then use this outcome to peel Russia away from China and bring it closer to the West. In the past, Russia has had territorial disputes with China. Currently, however, Moscow fears China’s growing influence, and does not wish to be beholden to it as a “junior partner.”

For those who argue that staying the course and writing Russia off as a perennial pariah is the better option, it is important to understand that Russia is capable of sustaining a highly destructive war of attrition in Ukraine for a long time. It might also see further gains if Western weapons do not offset Ukrainian battlefield losses fast enough to turn the tide, and time does not appear to be on Ukraine’s side. Russia also remains the only nuclear peer to the United States and it has an “escalate to de-escalate” nuclear strategy which, as two experts explained in 2018, “lowers the bar for nuclear weapons use to a terrifyingly low level.” This makes a continued conflict in Ukraine risky. Furthermore, NATO countries risk severely depleting their arsenals of important weaponry the longer war drags on.