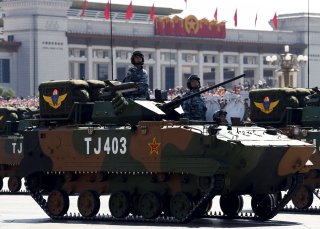 The CCP’s new Central Committee (CC) consists of 205 members and includes forty-three military representatives, compared to forty-one in the previous CC. About half of this group comes from the PLA Army. The rest consist of members from the Air Force, the Navy, the Strategic Support Force (SSF), the Logistics Support Department, the Rocket Force, and the People’s Armed Police. The Navy has effectively doubled its strength to eight members, up from four in the previous CC. The PLA Air force, however, remains at six members of the CC.

Further, the Western Theatre Command (WTC), China’s largest theater command, has traditionally sent around seven members to the central authority. In the new CC, however, at least ten members have either served in crucial leadership positions in the WTC or have some association with it. Seven of these ten members are Army representatives.

Other members, namely Xu Zhongbo, Xu Deqing, and Guo Puxiao, have served in different roles for considerable periods in the western region. Therefore, they understand the region and its security situation in a comprehensive manner. Finally, He Weidong is a former commander of the WTC ground forces and played a key role in the 2017 Doklam standoff with India. He Weidong’s experience in the western and eastern regions, including a joint command role, helped him gain a twin promotion to become the second vice-chairman of the CMC. The WTC, therefore, has significant capability to shape China’s future national security policies. It further reinforces the impression that China’s southwest border is increasingly gaining importance in the national security discourse.

The Army has regained its predominance in the new CMC. The CMC has customarily had eight members, including Chairman Xi Jinping. In the previous CMC, the Army claimed only two members, Zhang Youxia and Li Zuocheng, and had a partial claim over a third member, Miao Hua. Although Miao Hua received a promotion as an admiral in the PLA Navy, he spent almost his entire career in the Army, rising to the post of lieutenant general in 2014. He is often considered an Army representative in the PLA’s internal communications.

Therefore, even after including Miao Hua in the Army camp, the previous CMC remained in a balance between the Army and the rest of its sister services. In the new CMC, though, the Army has succeeded in sending three full members along with Miao Hua, tipping the balance in its favor. Additionally, in an unanticipated move, the Air Force lost its sole seat. Newer services, namely the SSF and the Rocket Force, however, have maintained their positions. Nevertheless, the entire CMC rearrangement tilts against the grain of the PLA's modernization drive, which had aimed to implement the Joint Warfare Doctrine (JWD).

The PLA entered the millennium aiming to implement the joint war philosophy in its military modernization program. Interoperability between services and the capability to conduct joint operations remain central to this theme. To further reinforce this momentum, China’s top political and military leadership has consistently endorsed the joint doctrine. In 2015, Xi further launched comprehensive higher command reforms to facilitate faster and deeper integration of joint operational concepts in the PLA.

A crucial aspect of joint operational capability is service parity among the PLA's multiple forces. Traditionally, due to the PLA’s excessive continental orientation and China’s long history of land-based conflicts, the CMC had remained Army-heavy and the ground forces dominated most of the PLA’s top hierarchy. Therefore, the PLA speakers endorsing reforms often criticized the Grand-Army mentality while highlighting the Navy and its sister services’ vital role in future joint operations. Reforms in 2015 strove to achieve this objective by reducing the Army’s role and enhancing the stature of its sister services in the highest military echelons. Xi even ensured large troop demobilizations from the Army’s roster, even when other services increased their ranks.

The drive to achieve joint operational efficiency faced a jolt in 2017. A number of the simultaneous translocations undermined the PLA’s force coherence and command effectiveness at multiple levels. Therefore, when Chinese troops faced India at the standoff in Doklam, the dangers of disparaging ground forces became evident to the Chinese leadership. For seventy-three days, the land border dispute kept both armies on edge, compelling the PLA to enhance its focus on land warfare capability. Consequently, the Army’s profile received a boost, and its preeminence in potential future conflicts at China’s land borders regained relevance.

The second paradigmatic shift emerged in the summer of 2020. Chinese and Indian troops clashed at the Galwan Valley and ended up in a standoff, with both states forward deploying 60,000 troops against the other side. Despite sixteen rounds of discussions and partial disengagements over the last two and a half years, the dispute continues.

The events at Doklam and Galwan played a crucial role in the recent party congress military promotions. The PLA hierarchy has realized it needs to refocus on ground warfare capabilities under joint combat conditions to win local wars on China’s periphery.

Xi, in his 2022 Party Congress Work Report, reiterated that the PLA would stay the course on joint combat capability development. The PLA will strive to speed up the intelligent and informatized development of combat capability, requiring the induction of unmanned systems, network information systems, artificial intelligence, and hypersonic missiles. The report strongly recommended joint force-on-force training under combat conditions with information system support.

However, the CMC reshuffle and the latest CC composition indicate a delicate balance between joint combat promotion and a renewed boost to land combat capability development.

The PLA has so far focused on achieving national objectives by operating below the threshold of war in the near to medium term. Both the Doklam and Galwan conflicts stayed under the war threshold. However, this did not prevent the PLA from achieving its objectives on the ground in both theaters. Moreover, both of these hostile areas are located in the high-altitude Himalayan region, reducing the sister services' role in a potential conflict. The Army will, by nature of the terrain, dominate the conflict, and the rest of the services will maintain their limited supporting roles.

However, China’s national security discourse in recent years has been dominated by Taiwan “reunification” and the use of force against the island. The discourse embodies empty aspirations aimed at posturing and shadowboxing in the regional security architecture. Xi’s emphasis on Taiwan’s complete reunification appears to be a work-in-progress approach, as many impediments hinder China’s path to unification. The PLA’s modernization remains a work in progress, and its lack of adequate operational experience dents China’s confidence. Moreover, the U.S. forces, supported by their allies, present a formidable challenge in the Indo-Pacific that China cannot ignore. The use of force to take Taiwan will further endanger Beijing’s economic applecart, which is crucial for the country’s slowing economy. Therefore, it can be safely argued that a potential conflict over Taiwan is a ways off.

A conflict between China and India, however, is closer than it appears. The PLA has traditionally dominated the India-China border due to its superior border infrastructure development and high-tech weapon platforms. However, this comparative advantage has steadily eroded over the last decade. India has feverishly pursued border infrastructure development, rolled out new weapons platforms, and carried out numerous military exercises to enhance its operational edge.

The consistent erosion of China’s comparative border dominance, the growing Indian threat to China’s southwest underbelly, and a near-hostile Indo-Pacific regional security context have played crucial roles in the latest CMC and CC military reshuffle. At a minimum, China’s neighbors need to remain careful in this new era.

Dr. Atul Kumar is a researcher at the Griffith Asia Institute at Griffith University, Brisbane, Australia. He completed a Ph.D. on the Chinese military from Monash University in Melbourne, Australia, and worked on China's military and security policies.