What China Thinks About the North Korean Dilemma 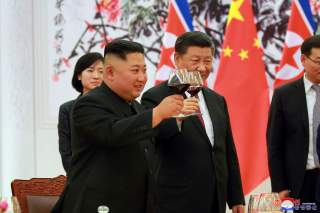 With the “process” of denuclearization on the Korean Peninsula “on ice,” to put it most politely, more than a few national security analysts are gloating that their predictions regarding the total failure of President Donald Trump’s approach are becoming more evident every day. The 1950s are back with a vengeance and this time Pyongyang has intercontinental ballistic missiles (ICBMs). To add seeming insult to injury, moreover, the divide or “wedge” between Seoul and Washington is also widening at a troubling clip. One may begin to despair that Moon Jae-in’s historic peace effort will break upon the rocks of intransigence, both in Washington and Pyongyang.

For sure, it was unwise for the Trump Administration to break the nuclear agreement with Iran, badly injuring Washington’s credibility, even as the United States is trying to reach a new agreement with North Korea on rather similar issues. Nor does the U.S. side appear to have adequately done its homework in preparation for the Singapore Summit back in June 2018. Finally, U.S. leaders have failed to prioritize and so have let trade dominate the China agenda, while hacking and Syria have dominated the Russia agenda. As a result, neither Beijing nor Moscow has had the focus, much less the incentive, to coax and bribe Pyongyang into making the hard decisions on denuclearization.

Yet, all is not lost—at least not quite yet. Some small flicker of hope was reported recently in the South China Morning Post. In that article, it was claimed that North Korea-China bilateral trade has decreased by more than 50 percent during 2018. That is a rather stunning figure, considering that the drop in trade was 10.5 percent for 2017. This would seem to indicate that China is not only abiding by United Nations sanctions against North Korea but has substantially increased the pressure on Pyongyang. All this even as Beijing simultaneously played host to visits by Kim Jung-un twice during 2018. This could be the latest version of “making the hard harder and the soft softer” [硬更硬, 软更软] in Chinese strategy.

In this Dragon Eye column, I have attempted to make a contribution by summarizing Chinese-language analyses on the evolving Korean situation. Below, a rather unusual Chinese study is dissected. This was the lead article in the journal Contemporary Korea [当代韩国], published by the Chinese Academy of Social Sciences in mid-2018. The article is unusual in several respects. First, this journal actually only very rarely carries pieces related to North Korea. Second, it is written by two young Chinese scholars, Wang Xingxing and Niu Xiao, both of whom have extensive experience in Pyongyang, studying at Kim Il Sung University, while one of them (Wang) also obtained a Ph.D. from Seoul National University. Is it possible that such young thinkers, who have had a window into Chinese, South Korean and also North Korean thinking could know best how to innovate our way out of the present Gordian Knot?

Addressing the innovation challenge, they call on China in the paper’s second sentence to embrace “new perspectives … new methods, new thinking and … new cooperation” to cope with the evolving situation. Wang and Niu begin by outlining a global and regional context in which the gap between the powers, in particular the capabilities gap between America and China, is narrowing. To their reckoning, a major problem is that the U.S. “ability and willingness to provide public goods for world development are both declining [为全球发展提供公共产品力量与愿意都下降].” Not only do they see China’s role in world affairs and globalization increasing, but they also see a trend toward a “geo-economic [地缘经济]” conception of security. They additionally observe a trend toward growing “bipolarization [两极化]” that will also impact the situation on the Korean Peninsula.

The discussion regarding North Korea’s situation is a bit more concrete. Noting that Kim Jong-un has sought to use changes in the international system to the advantage of North Korea, they observe that in 2017, Pyongyang succeeded in achieving “breakthroughs in hydrogen bomb technology and nuclear weapons miniaturization [突破了氢弹技术与核武器小型化技术].” Demonstrating some knowledge of nuclear strategy affairs, moreover, these Chinese authors note that North Korea has “many times demonstrated land-based mobility and survivability [多次展示陆基机动与生存能力]” for its arsenal. While some technical obstacles remain, they conclude that North Korea “has a certain deterrent capability against the U.S. [具备了一定的对美国威慑能力].”

These Chinese analysts are not particularly optimistic regarding denuclearization. For them, “North Korea’s fundamental goal in possessing nuclear weaponry is survival [朝鲜拥核的首要目的就是生存],” such that “having nuclear weapons means securing life and denuclearization means death [拥核即保命无核即死亡].” They conclude that exchanging security for denuclearization, therefore “is already not possible.” Beyond survival, moreover, they suggest that Pyongyang has other reasons to want nuclear weaponry, including prestige, internal politics, as well as the fact that DPRK “conventional military power is inadequate [常规军事力量不足].” Yet, Wang and Niu are not entirely pessimistic as they also underline that North Korea’s priorities are now on “economic building,” and thus it must pursue the “warming” trend. The Chinese analysts accord ample space to discussing Moon’s innovative diplomacy. They underline that Moon’s view of the U.S.-ROK alliance might be different than that of his predecessors. Most importantly, Moon’s “new peace campaign” will “emphatically not permit the Korean Peninsula to erupt in a war.”

By contrast, and not surprisingly, these China analysts are quite skeptical of U.S. motives, suggesting that “The U.S. cannot imagine a Korean Peninsula without the North Korean nuclear problem.” They continue that Washington is “not willing to finally resolve the North Korean issue [不愿意解决掉朝鲜问题].” They view the “largest barrier” to “structural transformation” [结构性改善] in the wake of the “Olympic Truce” to be the United States. They note that Beijing has strictly implemented UN sanctions against Pyongyang, but hold out little hope for results. Instead, they advocate that Washington implement a “new cooperation platform [新的合作平台]” with Pyongyang. Americans are wrong, they insist, to attempt negotiations that “accomplish the whole task at one stroke [毕其功于一役].” American expectations and requirements are just “too high,” Wang and Niu contend.

In a stark reminder of the dark situation that characterized the situation a year ago, these Chinese scholars undertake a surprisingly detailed analysis of various U.S. military options. Where most American strategists would likely prefer to forget the term, the phrase “bloody nose campaign [流鼻血作战]” appears many times in this analysis. They rate the chance of a U.S. “intense attack” employing tactical nuclear weapons as “rather low,” noting that North Korea could make punishing counter-attacks against both South Korea and Japan. Even a medium-level U.S. military campaign, however, could prompt North Korean nuclear retaliation [核报复], they argue, since there is “no certainty [不确定性].” The related problem of avoiding great power conflict, Wang and Niu conclude, suggests that America is most likely to continue low-level efforts against Pyongyang, including perhaps maritime interdiction, close-in surveillance, and cyber operations.

The conclusion of the article broaches China’s growing role more directly and also makes some suggestions for new attempts at pragmatic diplomacy. It is noted that the four-power framework of the U.S.-China-North and South Korea has made some progress, but it is additionally proposed that other frameworks, including a triangle of China plus both Koreas [中朝韩], and obviously the two Koreas themselves can also make important progress in relaxing tensions on the Korean Peninsula. In a rather unexpected turn, the piece also advocates strongly for Russia’s increasing role. Indeed, Moscow is labeled as the “up and coming youngster [后起之秀]” in this complex situation. That parallels an argument I have made in this forum more than once that Russia’s diplomatic potential in this crisis is yet untapped. The authors observe that “China-Russia cooperation could be among the decisive external factors in the future of the Korean Peninsula [中俄合作可能是未来朝鲜半岛局势的决定性外因之一].” They further advise that “China and Russia should make every effort to support South Korea to calm the tense situation …” To carry this logic a bit further, neither China nor Russia likely have the ability to deliver a “soft landing” for Pyongyang on their own, but they might in combination be able to form the right balance of sticks and carrots – emphasizing the latter.

In the end, it seems, Wang and Niu cannot escape the two-sided dilemma that Beijing still confronts. They state forcefully that China’s overall policy of “Denuclearization, no war and no chaos [无核化不战不乱]” must not be misunderstood to mean “Fear war, fear chaos, and fear nuclearization [怕战怕乱怕核].” They assert, moreover, in the next paragraph that “North Korea’s possession of nuclear weapons seriously threatens Chinese security interests.” But at the same time, they insist that the United States absolutely cannot launch a war without China’s permission, nor will Beijing “be forced into a Cold War.” In addition to supporting negotiations among the two Koreas, China must “emphasize “development … and great power cooperation,” Wang and Niu maintain.

This unique Chinese article suggests that Beijing has not at all given up on the prospect of transformational change on the Korean Peninsula. In order to help realize such a change, however, U.S. diplomats need to break with traditional paradigms, especially regarding zero-sum thinking in U.S.-China relations. Viewing China as a partner in this process and adopting the step-by-step approach (as advocated by both Seoul and Beijing) holds out the best hope for significant progress at the prospective early 2019 Trump-Kim second summit.