What the Closing of the Suez Canal Says About U.S. Maritime Security 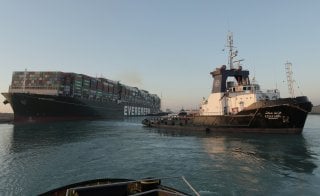 The Ever Given wasn’t the first ship to block the Suez Canal. A multi-ship pile-up in 2018 snarled maritime traffic there for two days. But the sheer size and bulk of the Ever Given was a much greater challenge—one that took 11 days to solve.

If a strategic maritime chokepoint such as the Suez Canal is closed, then how long can this be endured before the U.S. economy suffers serious damage? And is the Navy appropriately positioned and sized to contend with such closures?

When the Ever Given grounded on March 23, regional tensions had been high for months due to an undeclared tanker war between Iran and Israel. There were also mounting concerns over Russian military forces massing in Crimea and on Ukraine’s Eastern borders.  To move forces quickly between the Arabian Gulf and the Mediterranean, the U.S. Navy must have access to the Suez Canal. Without it, naval forces must circumnavigate Africa, taking over a week to arrive at a flashpoint.

On the day before Ever Given’s grounding, the Eisenhower carrier strike group (CSG) was in the Eastern Mediterranean conducting operations against ISIS (Islamic State in Syria and Iraq), while the Makin Island amphibious ready group was in the Arabian Sea.  Had tensions turned to conflict in Ukraine while the canal was blocked, the nearest significant naval carrier strike force (the Theodore Roosevelt CSG) would have had to make a circuitous transit from the Indian Ocean—a danger acknowledged publicly by the Pentagon.

The Suez Canal closure created a 360-ship traffic jam and disrupted almost 13 percent of global maritime trade. In addition to creating added costs for shippers, the blockage is anticipated to cause downstream backlogs as delayed ships surge into and overwhelm ports and losses in global trade of up to $10 billion.  The United States is less reliant on the Suez Canal than European and Asian economies, but had the Panama Canal been similarly blocked, it could severely impact the U.S. economy, according to a 2010 U.S government study.

The Ever Given episode proves that ever-larger container ships transiting strategic chokepoints pose a challenge for modern tugs and salvage ships to quickly clear.  It would take weeks for global supply chains to adjust to a prolonged disruption of the Panama or Suez Canals. Consider that, had this disruption occurred during the early stages of the coronavirus pandemic, medical supplies would have been delayed with high human costs.

To mitigate such disruptions, the Navy must ensure a distributed forward naval presence.  On April 2 the Eisenhower CSG exited the Suez Canal heading south, leaving no naval strike group supporting operations in the Mediterranean.

Additionally, the Navy—in cooperation with the State Department—should seek to ensure that canal operators have adequate resources to clear the largest of vessels, grounded or intentionally sunk. This would be in Cairo’s financial interest as well as ours.  The Suez Canal generates annual revenues of $5.6 billion, providing Egypt with critical foreign currency and making up almost two percent of its economy. Similarly, the Panama Canal generates $3.4 billion in annual revenues and accounts for 40 percent of that nation’s economy.

Nonetheless, the nation needs to look to procuring the capacity to unilaterally re-open strategic chokepoints should the need arise in a conflict.  In the case of Ever Given, it required a special suction dredger able to remove two thousand cubic meters of soil an hour and special heavy capacity salvage tugs, like the Dutch ALP Guard which took five days to arrive.

Additionally, a third party with controlling stock of chokepoints, notably China in the Panama Canal, can imperil transit of critical war reserves or naval vessels in crisis.  On this more action is needed.

With the Biden administration seeking a multi-trillion dollar “infrastructure” bill, it would be wise to consider investments that harden the U.S. economy to such disruptions. After all, in 2011, the U.S. relied on maritime shipping to receive 53 percent of its imports and send 38 percent of its exports and remains much the same today.

Ever Given’s grounding comes at a time when more and more political leaders and naval thinkers are turning to the precepts of America’s revered maritime visionary—Alfred Thayer Mahan—to answer the core question: “What is a Navy for?”  The sight of hundreds of ships backed up around the Suez Canal as tensions rose from the Taiwan Straits to the Black Sea should be instructive.

Brent D. Sadler is a senior fellow for Naval Warfare and Advanced Technology in The Heritage Foundation’s Center for National Defense.