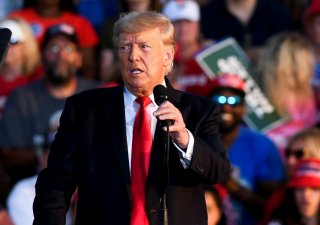 Former President Donald Trump is acting like he’s running again. He has numbers well above every other potential Republican candidate and doing quite well in polling against President Joe Biden if the 2024 election were held today.

Then again, Trump acted as if he would run in 1988, 2000, and 2012. Trump has good reasons to sit out 2024 and potentially just be a kingmaker. A majority don’t want him to run, including about one-quarter of Republicans, which is also true of Biden and a slightly higher percentage of Democrats, according to another recent poll.

A candidate such as Florida governor Ron DeSantis gaining the Trump endorsement might cause the diehard Trump haters to renounce him. But he would still be able to unify the GOP—as a NeverTrump movement seems likely without Trump.

Still, a Never Trump lane is either emerging or candidates are trying to create one. Rep. Liz Cheney (R-WY) visited New Hampshire last week to deliver an anti-Trump speech. Former New Jersey gov. Chris Christie delivered more coded remarks in Las Vegas—asserting the GOP needs to focus on the future and not on 2020.

Either of these seem like longshots, but it does show candidates are attempting to stake out their territory for 2024.

It is of course not so simple as pro-Trump, anti-Trump. In fact, picking a lane and running in it has become more complex than a generation ago when Ronald Reagan’s party pushed the “three-leg stool” model of finding a candidate acceptable to social, economic, and national security conservatives.

A Pew Research Center poll this week divided each party into four separate categories and “stressed sideliners” that could swing either way. Of those four categories for the Right, the “Faith and Flag Conservatives,” and “Populist Right,” are most likely to be in the pro-Trump candidate lane. The more traditional “Committed Conservatives” as well as the younger and less engaged “Ambivalent Right,” are very different. Neither are anti-Trump, but both are more inclined to want a fresh face.

Boiling this down, it’s worth looking at likely candidates and where they fit in for 2024 if Trump opts out of running. To keep it simple, this is a look at Trump and anti-Trump lanes, and which of the four Pew categories they appeal to. Ballotpedia lists twenty-eight potential GOP contenders for president, but here’s a look only at candidates who are either showing up in early polls or seem like reasonable possibilities.

Play for the Trump Voters

On the front lines of the Trump administration were former Vice President Mike Pence and former Secretary of State Mike Pompeo. Both could make a strong policy-based case for the legacy of the previous president. It’s a legacy that is looking better each day that passes in the Biden administration.

While Trump’s policies are popular enough for a GOP primary electorate, Trump himself was better at drawing out emotion—not seemingly the strong point for either Pence or Pompeo.

A third likely candidate on this front is former United Nations Ambassador Nikki Haley, the former governor of South Carolina. Though her comments on Trump have waivered.

Any of these three Trump administration figures would very likely be popular to the “Committed Conservative” demographic in the Pew study, and with “Faith and Flag” voters—but less with the “Populist Right.”

Let’s next look at senators. One advantage they have is much easier access to the national media.

Senators Ted Cruz and Josh Hawley seemed most eager to plant their flag in the Trump lane, in supporting the forty-fifth president’s challenge to the election results. Cruz was interestingly Trump’s fiercest challenge in the 2016 GOP primary. Even before the 2020 election, Hawley had polished his reputation as a populist championing blue-collar Americans, with a skeptical eye toward Big Tech.

The Left unfairly tarnished both over the January 6 riot. It’s fair game to question their judgment for challenging the election results. But they sought what amounted to political theater in the form of prolonged debate about the conduct of the election. No one expected violence that day.

Cruz, however, seems to have lost some of the fire he had in his 2016 run. Hawley would be a fresh face and has some of the same attributes as DeSantis—mainly the potential to impress Trump voters without scaring suburban women away.

Sens. Tim Scott and Marco Rubio—who both seem like possibilities—haven’t been the biggest Trump cheerleaders necessarily, nor have they given Trump backers reason to oppose them. They would most likely appeal to the “Committed Conservative” voters. Though Scott, of South Carolina, and Rubio, of Florida, might not run if Haley and DeSantis are in the race.

DeSantis has a historical advantage in that governors typically win and senators typically lose. Barack Obama, John F. Kennedy, and Warren G. Harding were the senator-turned-president aberrations in the twentieth century. DeSantis is popular in his state and seems likely to win re-election, but needs to win decisively to enter as a presidential frontrunner. Moreover, DeSantis could very likely get all four of the Pew identified groups for the right on board.

Texas gov. Greg Abbott, seeking a third term in 2022, South Dakota gov. Kristi Noem, and Virginia governor-elect Glenn Youngkin have all been mentioned as possible candidates. Youngkin—who won in a blue state accepting Trump endorsement but not wrapping himself in it—may have demonstrated the right formula. Abbott and Noem could have cross-appeal among the Pew identified groups. It’s too early to know about Youngkin.

But what these governors lack is being battle-tested as DeSantis has. The national mainstream media has been attacking DeSantis since at least last year and he has so far passed with flying colors. History is filled with strong governors that withered under national scrutiny of a presidential race. DeSantis won’t likely be one of those.

Let’s first dispose of the aforementioned Cheney and Christie.

Cheney doesn’t seem like a real possibility to run unless she simply wants to troll Trump in debates. So, in a Trumpless primary, it’s doubtful Cheney would run. But, if she did, she’s not a liberal by any means. It’s not clear that she would have the backing of any of the four Pew identified groups despite a clearly conservative record in Congress. But, she could be a media candidate with fawning coverage giving her a longer duration through primaries than votes would warrant.

Christie, on the other hand, likely will run with or without Trump. His comments about looking to the future instead of dwelling on 2020 weren’t that harsh but offended Trump enough for him to issue a statement attacking Christie. The time for Christie to run would have been 2012 when he was a hot commodity in the GOP. He fizzled by the 2016 cycle and by 2024 he will be an ex-governor out of office for almost a decade. His best hope could be among some “Committed Conservatives.” But that seems shaky.

So, there are probably only two serious candidates in the anti-Trump lane.

Sen. Ben Sasse was among seven Republicans that voted guilty in Trump’s second impeachment trial on the charge that he incited an insurrection. Sasse voted against the first, and very ridiculous, Trump impeachment over the Ukraine phone call. So, he’s not a knee-jerk anti-Trumper.

Sasse could probably only draw some support among the “Committed Conservative” voters, and would probably have to work for the vote. Though, his Nebraska roots might appeal to the “Faith and Flag” voters.

Maryland Gov. Larry Hogan, who won twice in a very blue state by wide margins, is certainly more conservative than other blue-state Republican governors such as Charlie Baker in Massachusetts or Phil Scott of Vermont. He’s indicated he might run regardless of what Trump does.

Hogan never voted for Trump in the general election. He wrote in Reagan’s name instead. That’s not the worst gesture to conservatism. He might be a good general election candidate, but his best hope might be carving out some support from the “Ambivalent Right” and the “Committed Conservatives.” Even that’s a long shot.

It’s of course too soon to know anything definitively on 2024. But as modern fundraising forces presidential campaigns to start much earlier, it’s never too early to start analyzing.