What VE Day Can Teach Us About Confronting the Coronavirus 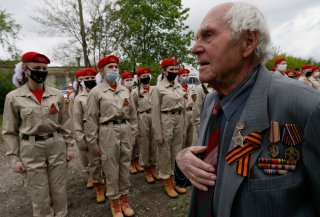 Today marks the seventy-fifth anniversary of VE Day, when Nazi Germany capitulated to Soviet armies crashing into Berlin from the east and Western armies lunging into Germany from the west. As we pay tribute to those who prevailed in the greatest of all continental wars and saved the world from a dark future, it’s fascinating and useful to compare World War II in Europe to today’s global crisis—the coronavirus pandemic.

The differences are striking—which makes the comparison worthwhile.

First, consider what strategic grandmaster Carl von Clausewitz calls the “nature of the war.” Fail to understand the nature of the war and you have a hard time getting out of it in good order—if at all. To appraise the nature of the war Clausewitz instructs would-be combatants to “first examine our own political aim and that of the enemy,” then “gauge the strength and situation” of the contenders, then evaluate “the character and abilities of its government and people and do the same in regard to our own,” and lastly “evaluate the political sympathies of other states and the effect the war may have on them.” Undertaking a comparative net assessment helps political leaders and military commanders “discover” what a warlike enterprise will cost the country in the way of lives, treasure, and military matériel.

Sizing up the Axis powers was as straightforward as vanquishing them was daunting. These were formidable dictatorships embarked on the largest land grab the world had ever known. Repulsing them required unlike allies—liberal Great Britain and America alongside the totalitarian Soviet Union—to make common cause and pool all of their national resources for a protracted struggle. Only thus could they bring VE Day about—and spare the world that bleak future.

The coronavirus is a foe of an altogether different type. The disease has no political aims, nor government, nor people or military might to rally. Nor does it have enemies in the usual sense. It is indiscriminate. It attacks anyone who comes within reach and accepts reverses at the hands of the public-health community, government officials, or watchful citizens without complaint. Clausewitz makes much of the primal passions—fear, hatred, spite, rage—that typify and fuel battlefield interactions. There is none of that in the battle against pestilence. It hates no one, and there is little point in hating it. Dreading it is another matter.

Its impersonal nature makes the virus hard to grapple with. Firing popular passions is crucial in warfare against human antagonists. It lashes the war effort onward. Sustaining enthusiasm for combating disease is hard by contrast. Nor does the virus field army divisions, air forces, or naval fleets that can be defeated—providing the emotional satisfaction that occasional “incremental” victories furnish. Franklin Roosevelt and Winston Churchill could order amphibious forces into North Africa in 1942 to start engaging Italian and German ground forces. Win or lose, such campaigns rouse popular dander—invigorating the nation’s fervor and fortifying its staying power for a long fight.

It’s tough for Donald Trump or state governors to summon up fervor for public health measures aimed at an invisible, indifferent enemy. There are no new combat theaters to open or battles to instigate. Nor can Flatten the Curve! compete with The United Nations Fight for Freedom in the realm of sloganeering. That we must collectively manipulate the slope of a curve on a graph may be a necessary goal. It may be a necessary message on which to campaign. But it is far from inspiring as a standard to rally around. Public morale is apt to droop during the present crisis in a way it seldom did during the bloodletting against the Axis.

And think about the way a domineering human foe—particularly a comic-book villain along the lines of Hitler or Mussolini—unites people and societies to vanquish the common danger. A pandemic has just the opposite effect. It does damage amongst us, not in faraway lands as in World War II. In a sense, then, the virus resembles a fifth column intent on subverting the nation from within, or even an insurgency determined to overthrow the government and rule for itself. It leaves everyone wondering who is the enemy. As French-Algerian War veteran and theorist David Galula observes, internal war is an especially cruel form of war. It permits no one to remain neutral and get on with life. Galula’s warning is poignant for us all after weeks of lockdown.

While a virus is incapable of harboring enmity or political aims, it nonetheless—like a domestic rebellion—loosens the fellow-feeling, or sense of fellowship, that binds a society together. Neighbors and friends come to view one another as potential threats. After all, who knows who is carrying the infection? It takes an extra measure of goodwill to overrule the natural tendency toward standoffishness—especially when official messaging reinforces the inclination to keep our distance.

As it is with individual citizens, so it is with nations. The Axis threat brought a countervailing alliance into being to thwart it. The coronavirus tends to fragment the international community as countries close their borders and seclude themselves to stem the spread of infection. Harvard professor Stephen Walt notes that common interests and perils, common heritage or worldviews, or the ability to pay off (or strongarm) others can bind together coalitions or alliances. The pandemic prompts societies to look inward—undercutting perceptions of mutual interest while attenuating social and cultural affinities. Meanwhile, economic upheaval limits the resources governments can tap to assist other countries.

And lastly, the coming months will see no clear end to the pandemic reminiscent of VE Day. No victors will return home from distant battlefields. There will be no tickertape parades. Photographers will record no scenes of jubilation. The return to normalcy will take place by increments, without the pleasures and rewards of martial triumph. The outcome will bear less resemblance to World War II than to the Vietnam War, when U.S. forces trudged home without victory. Now as then, the denouement may deflate—rather than enliven—American public spirit.

My, this has taken a dour turn. But there are upsides. When the pandemic crisis subsides and we sort through the wreckage from the late unpleasantness, VE Day can be more than a sentimental occasion to cheer on the World War II veterans remaining to us. What they did then can teach posterity in the here and now, and help us prepare better for the next crisis. They can serve—again.