What Will Happen After a Trump or Biden Win? 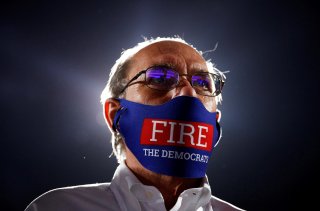 Rather than add to the frenzied, last-minute bet-hedging on Tuesday’s election results, it might be useful to focus for a moment on what comes next. What is it going to be like in the brave—or battered—new world that will begin on Nov. 4?

First and foremost, whatever happens on Tuesday, you can count on the mainstream media to behave badly on Wednesday. If their boy wins, then we can expect an instant canonization of Joe Biden as the wise, benevolent unifying Father of the Nation, a nation now solidly and permanently committed to a “progressive” path to bigger and better entitlements, quotas and standards of political correctness. Fear, loathing and conservatism will be banished from the land and the Republican Party declared dead on arrival. Meanwhile, as has been the case in all recent presidential elections, the millions of Americans who supposedly dwell in Hillary Clinton’s “Basket of Deplorables” will not trash major cities or engage in mass rioting, looting and arson.

On the other hand, if Donald Trump snatches victory from the jaws of defeat for the second time in four years, prepare for a tidal wave of rage and angst from the likes of the Washington Post, the New York Times, CNN and MSNBC. We will be told that darkness and evil have eclipsed wisdom and light, that an army of hate-driven zombies in fly-over country has crushed the hopes and assaulted the rights of non-white, non-male, gender-neutral, science-following, open-minded Americans everywhere, but especially in the enlightened, progressively-run cities and states where—aside from higher crime rates, periodic anarchy, and economic and educational disaster—everything is so much better than in the rest of the country.

Long before Inauguration Day, the call will be sounded for a new round of impeachment proceedings, with or without any credible evidence. And, in a repeat of 2016, angry mobs of sore losers can be counted on to take to the streets, many of them lawlessly. No surprises here.

So much for the surface sound and fury. Once the dust settles on the election results, where will we actually be as a country? I would suggest that there are four basic scenarios with two bottom lines.

Scenario 1: Biden wins big enough to strengthen the Democratic hold on the House of Representatives and to gain a Democratic majority in the Senate.

Scenario 2: Biden squeaks through, Democrats hold the House and Republicans keep the Senate

Scenario 3: Trump is just barely re-elected, the Democrats remain in charge of the House and the GOP of the Senate.

Scenario 4: Trump and the GOP substantially outperform the opinion polls, the GOP makes inroads in the Democratic majority in the House and holds the Senate at current numbers or better.

All four of these scenarios are within the realm of possibility, with numbers 2 and 3 the likeliest (in that order). Regardless of which scenario prevails, there are only two clear bottom lines that will dictate the two years between this presidential election and the midterms in November of 2022 and the subsequent lead up to the 2024 general election.

Whatever happens next Tuesday, it will just be one more turn in a long, winding political path, not the end of the world. And it will be defined by one of two bottom lines.

Bottom Line 1: If Biden wins—especially with a Democratic takeover of the Senate—the Democrats, egged on by the “progressive” media, will launch what I predicted some months ago in my column in the American Conservative as “a legislative and regulatory kamikaze attack on the Constitution which will cause much alarm, inflict some short term damage, and probably generate a massive conservative backlash in the 2022 midterm elections.”

This has happened before, and more than once. After Barry Goldwater’s overwhelming defeat by Lyndon Johnson in 1964, much of the liberal media declared the Republican Party legally dead. But, just two years later, the GOP scored record gains in the Congressional midterms and, two years after that, Richard Nixon was elected president, overwhelmingly re-elected in 1972. At that point, many conservative pundits declared that the Democratic Party had radicalized itself out of business

Then came Watergate, and Gerald Ford’s presidential defeat in 1976. The GOP was again declared out for the count, only to revive in the 1978 midterms and to usher in 12 years of Republican presidencies and growth in the grassroots party. Similar Left-Right swings occurred after the initial Democratic executive victories under Clinton and Obama. With a firm constitutionalist majority in place on the Supreme Court, it is likely that—if Biden is elected and the radical legislative wing of the Democratic Party tries to pack the Court, confer Statehood on the District of Columbia and Puerto Rico to stack the Senate and tilt the balance in the Electoral College—they will fall short. And they could face major reverses in the 2022 midterms derailing their radical agenda in both houses.

Meanwhile, the post-Trump GOP will have been regrouping and rebuilding just as it did after presidential losses in 1964, 1976, 1996 and 2012. This on the way to recapturing the White House in the next presidential cycle when a fresh Republican face would probably be pitted against an even older, wobblier Biden, or his militantly marginal, rather uncharismatic running mate, Kamala Harris.

Bottom Line 2: If we get four more years of The Great Orange Hope, the challenges and opportunities will be very different for both parties. For the GOP it will mean surviving many a presidential slip twixt via tweet and the lip for the next four years while continuing to pursue an agenda for continued economic opportunity and growth, for regulatory and bureaucratic reform, and for constitutional courts. Other priorities would include regaining control of our borders, continuing to follow a pragmatic foreign policy that saves lives and keeps us out of costly, unnecessary conflicts. Above all, it would mean a common sense, common decency approach to preserving the American Dream in the many parts of our country where it is still alive and well while bringing it back to our decaying inner cities and other pockets of poverty.

One of the best things a second Trump presidential term would have going for it is, to adapt an ancient adage, “Those the Donald would destroy he first makes mad.” The rabid nature of the impeachment frenzy during Donald Trump’s first term in office was probably a net plus for him in his run for re-election. If he is re-elected, and Congressional Democrats keep drinking the same Kool-Aid, they could actually help the GOP minimize its losses in the 2022 midterms.

My strong gut feeling is that Donald Trump will score the kind of upset victory that Harry Truman—another controversial, gutsy, and rather uncouth incumbent president—did in 1948. Then again, maybe it’s just something I ate.